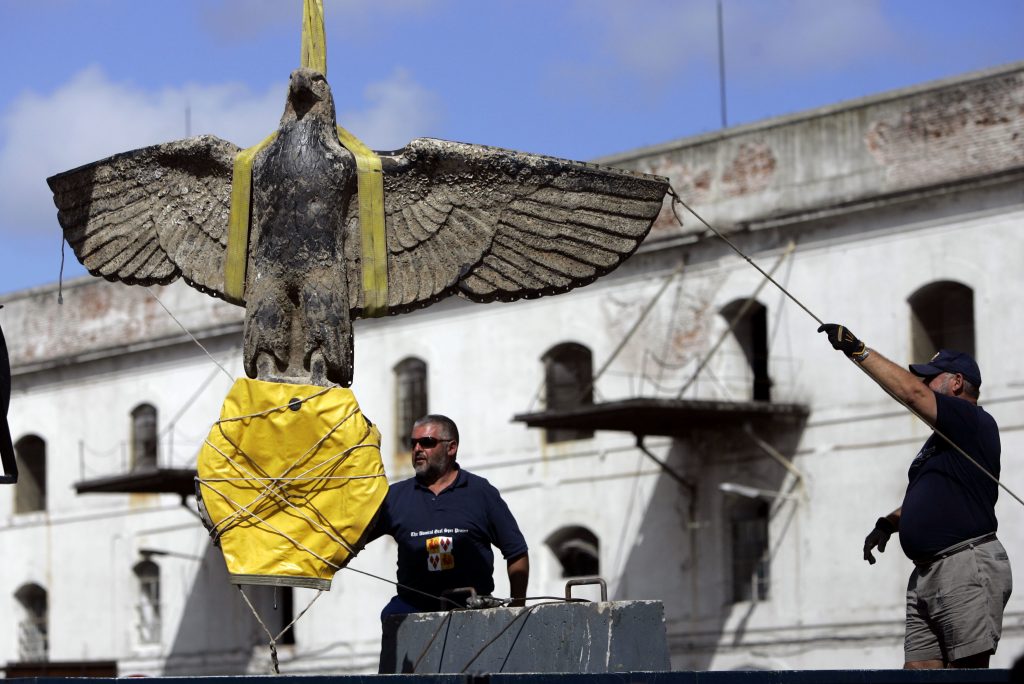 Uruguay’s government is asking political and religious leaders what it should do with a Nazi bronze eagle recovered off its coast in 2006, the defense minister said Wednesday.

The eagle was part of the stern of the German battleship Admiral Graf Spee, which sank off Uruguay at the outset of World War II.

Defense Minister Jorge Menendez said he would talk with members of the country’s four political parties Wednesday about dealing with the bronze eagle with a swastika under its claws. He met with members of Uruguay’s Jewish Central Committee on Tuesday.

“Our concern is that the eagle doesn’t generate a Nazi sanctuary in Uruguay that will draw Nazis from all over the region,” said Israel Buszkaniec, the committee’s president. “We’d have no problem if it’s sold and leaves the country.”

The Graf Spee was considered one of the most sophisticated battleships of its time. It prowled the South Atlantic and sank several Allied merchant ships before warships from Britain and New Zealand tracked it down and damaged it during the “Battle of the River Plate” that began Dec. 13, 1939.

The damaged Graf Spee limped into Montevideo harbor where injured and dead sailors were taken ashore. Its captain ordered the ship scuttled, sinking it a few miles from Montevideo to prevent it from falling into enemy hands.

In February 2006, a recovery team removed the eagle, weighing more than 800 pounds, from the ship’s stern. It has been kept since then in a navy warehouse.

The salvage team initially sued to demand the right to sell the piece. But Uruguay’s Supreme Court ruled in 2014 that the eagle belongs to the Uruguayan state. The ruling said, however, that if the piece is sold, the salvage group would have the right to 50 percent of the proceeds.

Opposition lawmaker Jorge Gandini has proposed exhibiting or selling the eagle to raise funds for the Uruguayan military.

Former President Julio Maria Sanguinetti suggested in a recent newspaper article that the eagle go on display in Uruguay because of its historical importance.

“To imagine that, as some say, it could lead to a certain Nazi cult is really absurd because it is actually the contrary: It’s a monument to their defeat,” he wrote.