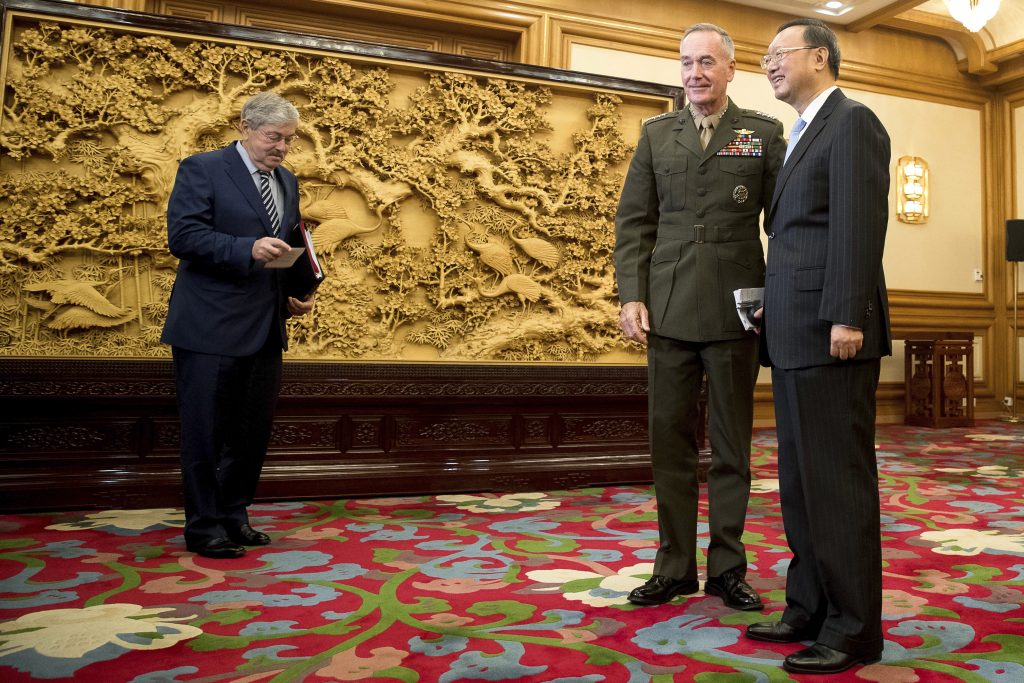 A military solution to the North Korean missile threat would be “horrific” but allowing Pyongyang to develop the capability to launch a nuclear attack on the United States is “unimaginable,” the top U.S. military officer said Thursday in Beijing.

Gen. Dunford was responding to questions about Trump’s chief strategist Steve Bannon saying in a new interview that there’s no military solution to the threat posed by North Korea.

In Beijing, Gen. Dunford said that it’s “absolutely horrific if there would be a military solution to this problem, there’s no question about it.”

But, he added, “what’s unimaginable is allowing KJU (North Korean leader Kim Jong Un) to develop ballistic missiles with a nuclear warhead that can threaten the United States and continue to threaten the region,” he said.

Dunford has met with his Chinese counterpart Fang Fenghui, chief of the People’s Liberation Army’s joint staff department. He also met with Fan Changlong, vice chairman of the ruling Communist Party’s Central Military Commission, and Yang Jiechi, China’s top diplomat. He has been in Asia this week, visiting South Korea, Japan and China.

In Seoul, South Korean President Moon Jae-in said he would consider sending a special envoy to North Korea for talks if the North stops its missile and nuclear tests, in an effort to jumpstart diplomacy.

He also declared, amid fears in South Korea that threats from Trump to unleash “fire and fury” on Pyongyang could lead to real fighting, that there would be no second war on the Korean Peninsula.

“The people worked together to rebuild the country from the Korean War, and we cannot lose everything again because of a war,” Moon said in a news conference broadcasted nationally. “I can confidently say there will not be a war again on the Korean Peninsula.”

Gen. Dunford also told reporters in Beijing that “there’s no question” any potential military action in the Korean Peninsula would be taken only in consultation with South Korea.

“South Korea is an ally and everything we do in the region is in the context of our alliance,” Gen. Dunford said.

Moon’s comments follow a spike in animosity generated by North Korea’s warning that it might send missiles into waters near the U.S. territory of Guam, and by Trump’s warlike language. Both of the rival Koreas and the United States have signaled in recent days, however, a willingness to avert a deepening crisis, with each suggesting a path toward negotiations.

President Trump tweeted that Kim had “made a very wise and well-reasoned decision,” referring to North Korean official media saying the leader would not give an immediate order to launch multiple missiles toward Guam.

“The alternative would have been both catastrophic and unacceptable!” the president wrote.

Next week’s start of annual U.S.-South Korean military exercises that enrage the North each year could make diplomacy even more difficult.

Moon was elected in May after a near-decade of conservative rule that saw animosity deepen between the rival Koreas. Moon wants to engage the North. But his efforts have so far been met with a string of threats and missile tests as the North works to build nuclear-armed missiles that can reach the U.S. mainland.

“A dialogue between South and North Korea must resume. But we don’t need to be impatient,” President Moon said. “I think lots of effort and time could be necessary to overcome a decade of severed ties and to reopen a dialogue.”

President Moon said that Washington and Seoul are closely communicating over the North Korean nuclear problem and share the view that strong sanctions and pressure are needed against Pyongyang to stop its provocations and force it into negotiations to give up its nukes. President Moon said he thinks Trump’s belligerent words are intended to show a strong resolve for pressuring the North and don’t necessarily display the willingness for military strikes.

North Korea’s threats against Guam and its advancing missile capabilities, highlighted by a pair of intercontinental ballistic missile flight tests in July, have raised security jitters among many South Koreans who worry that a fully functional ICBM in Pyongyang would force the United States to rethink whether to trade New York or Washington for Seoul in the event of a war on the peninsula.

The ICBM test-flights showed it’s only a matter of time for the country to achieve its long-stated goal of possessing a long-range nuclear-armed missile capable of hitting anywhere in the United States.

“I think the North perfecting an ICBM, loading an atomic warhead on it and weaponizing it is a red line. North Korea is nearing a threshold for the red line,” President Moon said. He didn’t elaborate, but many foreign experts have viewed the North’s possessing a reliable ICBM as a tripwire for potential U.S. strikes.