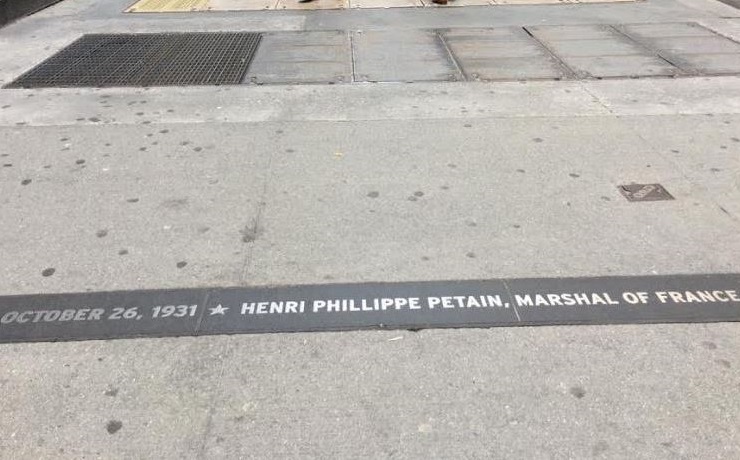 “After the violent events in Charlottesville, New York City will conduct a 90-day review of all symbols of hate on city property,” Mayor Bill de Blasio tweeted Wednesday.

In a follow-up tweet, de Blasio said, “The commemoration for Nazi collaborator Philippe Pétain in the Canyon of Heroes will be one of the first we remove.”

The commemoration referred to by de Blasio is one of many strips on the sidewalk of Lower Manhattan’s historic “Canyon of Heroes” parade route, each of which commemorates a person who was honored with a ticker-tape parade. Each strip has the name of the person, his title, and the date on which his parade was given.

Pétain was a legendary French World War I hero. Following the war, he was given the distinguished military title “Marshal of France,” and he is generally known to history as “Marshal Pétain.” Pétain later held various positions in the French government, and he received a ticker-tape parade down the Canyon of Heroes on October 26, 1931.

Among non-collaborationist French – and the free world at large – Pétain instantly went from honored hero to reviled traitor.

Following the war, Pétain was convicted of treason and sentenced to death. His sentence was commuted to life in prison, where he died in 1951.

Pétain is not the only Frenchman to receive a parade in the Canyon of Heroes before collaborating with the Nazis. Pierre Laval, then the prime minister of France, was honored with a parade on Oct. 22, 1931. He later served in the Vichy government under Pétain and was a brutal collaborator with the Nazi Final Solution. Following the war, he was found guilty of treason and executed.

“We are confronted every day with bigotry and divisiveness,” Hikind said in a statement. “New Yorkers have an obligation to say, ‘Not in our city.’ It’s time to remove all of New York City’s monuments and markers that glorify bigotry and strengthen that which perpetuates these ignorant beliefs.”