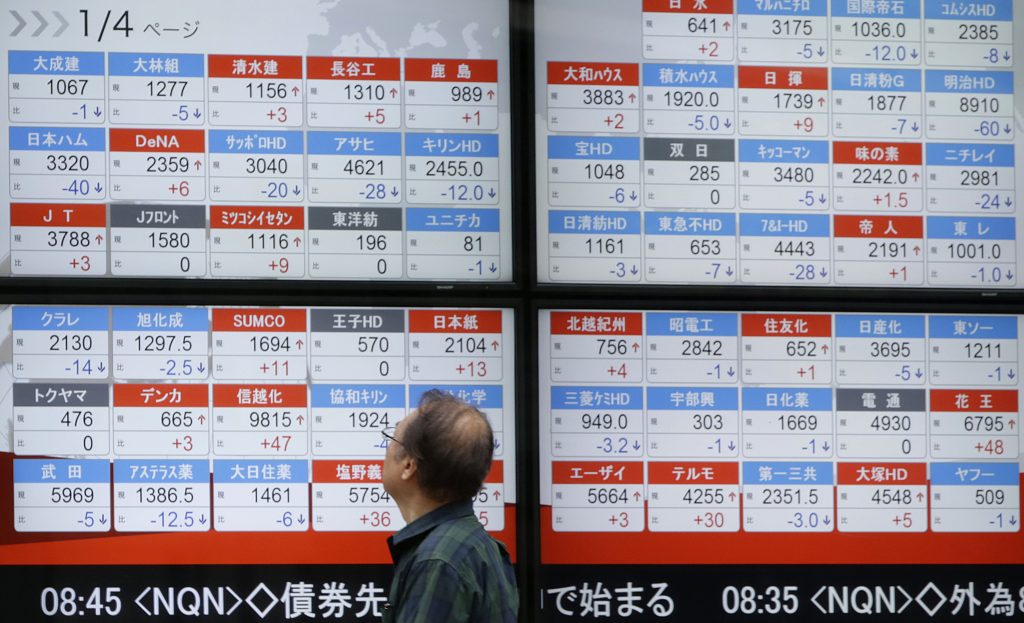 Asian stocks edged higher on Thursday as tensions between the United States and North Korea came off the boil, while the Federal Reserve’s concerns about weak U.S. inflation weighed on the dollar.

European stocks look set for a weaker start, with financial spreadbetter CMC Markets expecting Britain’s FTSE 100 to open down 0.2 percent, and Germany’s DAX and France’s CAC 40 to start the day down 0.3 percent.

Japan’s Nikkei slipped 0.1 percent, weighed down by a stronger yen as the dollar wilted and shrugging off data showing that the country’s exports rose for an eighth straight month in July.

Australian shares reversed earlier gains to fall 0.1 percent, dragged lower by a tumble in Telstra shares to a five-year low after the telecoms company said it would slash its dividend by 30 percent this financial year.

South Korean shares advanced 0.65 percent after the leaders of both North Korea and the United States appeared to back off from their heated rhetoric from last week.

South Korean President Moon Jae-in said Pyongyang would be “crossing a red line” if it put a nuclear warhead on an intercontinental ballistic missile, but that the U.S. had promised to seek Seoul’s approval before taking any military action.

Trump on Wednesday praised North Korean leader Kim Jong Un for a “wise” decision not to fire missiles towards the U.S. Pacific territory of Guam, after North Korean media reported that Kim had delayed to decision while he waited to see what the U.S. did next.

While that helped Wall Street close in positive territory overnight, concerns on the home front sent the dollar into reverse.

Trump announced the disbanding of two high-profile business advisory councils on Wednesday after eight executives quit in protest over his remarks blaming weekend violence in Virginia not only on white nationalists but also on antiracism activists who opposed them.

Moreover, minutes from the Fed’s July meeting released on Wednesday showed the central bank grew more wary about recent weak inflation, with some policymakers wanting to halt interest rate hikes until it was clear the trend was temporary.

Money market futures are now pricing in about a 40-percent chance the Fed will raise rates by December, compared to just under 50 percent before the Fed’s minutes were reported.

“The Federal Open Market Committee minutes confirmed one thing, which is that the committee members are not on the same page and there is no clear date when the Fed will initiate the process of reducing the size of the balance sheet,” Naeem Aslam, chief market analyst at Think Markets in London, wrote in a note.

“Trump dissolving his major business groups makes the investment community even more pessimistic because this sets the stage for even more failure for him.”

The dollar index, which tracks the greenback against a basket of six major peers, dropped 0.2 percent to 93.357 after Wednesday’s 0.3 percent loss.

The unemployment rate remained at 5.6 percent, as expected, although full-time employment fell by 20,300.

Sterling climbed 0.1 percent to $1.2908, extending Wednesday’s 0.16 percent gain after wages rose faster than expected in the three months to June, and the unemployment rate fell to 4.4 percent, its lowest since 1975.

The euro rose 0.1 percent to $1.1785, extending its 0.3-percent gain overnight, after the euro zone’s second-quarter growth was revised to 2.2 percent from a year earlier, from 2.1 percent previously.

Bitcoin, which has surged over $1,500 this month on speculative demand for the digital currency, slipped 1.4 percent to $4,317.49, but remained within a whisker of its all-time high of $4,400 touched earlier this week.

In commodities, oil prices edged up but remained close to a 3½-week low touched earlier this week as rising U.S. production offset a decline in stockpiles by the most in a year.

Benchmark zinc on the London Metal Exchange set a new decade high of $3,145 a ton on Thursday, and was last up 0.7 percent from its previous close at $3,140.