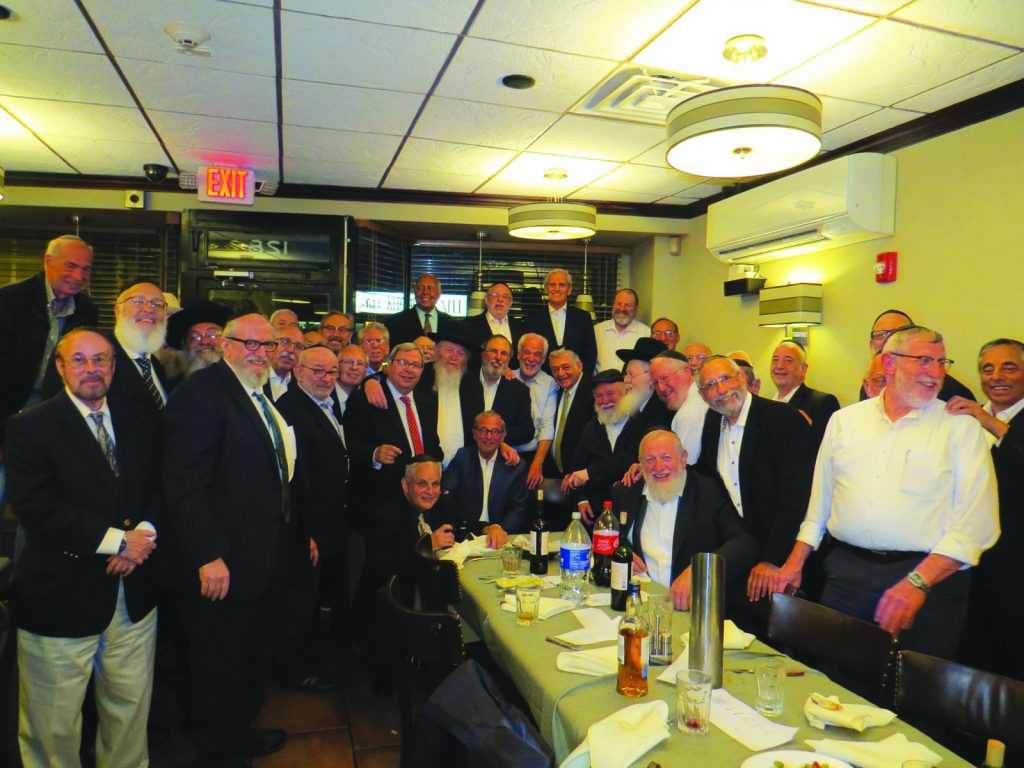 On Monday evening, August 7, Tu B’Av, an unprecedented event took place in our community. A gathering of men, consisting of the original group of talmidim of Harav Shlomo Freifeld, zt”l, at Yeshiva Sh’or Yoshuv, joined together to celebrate a 50th Anniversary Reunion.

The Reunion Committee of Rabbi Sholom Dov Rothman, Mr. Feivie Sinensky, Mr. Ahron Horowitz, Mr. Sender Teichman and Mr. Reuven Dornbush, worked diligently to contact old friends and invite them to the event. Guests traveled from near and far to be part of this momentous occasion. Many attendees still live locally in Far Rockaway and the Five Towns while others came in from Brooklyn and Monsey.

The reunion was held at Hapina Restaurant in Cedarhurst with approximately 40 chaveirim in attendance. The atmosphere was warm and welcoming and friends greeted each other like long-lost relatives, some not having seen each other in many years.

The program commenced with Mr. Feivie Sinensky introducing Harav Shimon Susholz, shlita, a founding senior Rebbi in Sh’or Yoshuv, who helped Harav Shlomo Freifeld launch the yeshivah. Rav Susholz is Rav of Congregation Keren Orah in Kensington, Brooklyn. Rav Shimon gave inspiring divrei Torah and was truly happy to see all of his talmidim, reminding everyone that there is no such thing as a “former talmid.” Rav Shimon enjoyed the evening so much that he stayed much longer than originally expected, and had nice conversations with all who approached him.

Rabbi Rothman thanked the Reunion Committee and thoughtfully mentioned all those who have passed on during the past 50 years. He also mentioned the names of some chaveirim in need of a refuah sheleimah and then spoke a bit about their Rebbi, Reb Shlomo, and some of the messages he instilled in them.

Later in the evening Harav Shmuel Brazil, Rosh Yeshivah in Ze’ev HaTorah in Yerushalayim, gave an outstanding speech. Following that, everyone enjoyed a reunion within the reunion: the very talented Ohr Chodosh Band (Rabbi Shmuel Brazil, Mr. Yossi Toiv of Country Yossi fame, Mr. Nachum Deutsch and Rabbi Yussie Lieber) performed a few nostalgic songs that really brought everyone back to their youth.

Many chaveirim got up and shared wonderful recollections of their Rebbi and the early years of Sh’or Yoshuv. Although the Rosh Yeshivah was niftar over 27 years ago, all of the talmidim, many of them grandfathers and even great-grandfathers themselves, still recall the way he loved them dearly.

Everyone seemed to feel that the warmth and cohesiveness of 50 years ago was experienced once again at this “family reunion.”