National How Statues of Robert E. Lee and Other Confederates Got Into the U.S. Capitol
National 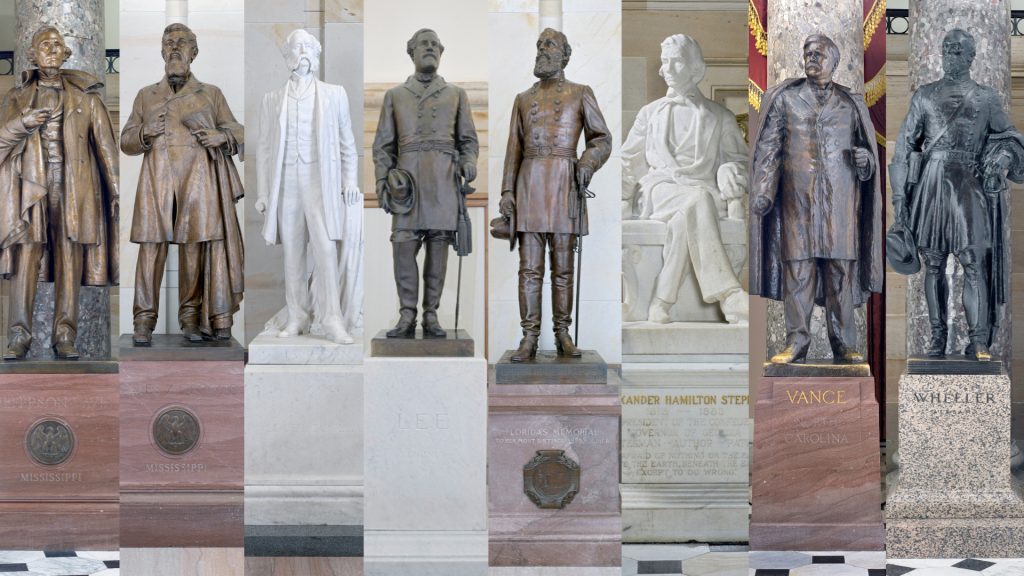 In a solidarity march on Sunday to protest the deadly violence in Charlottesville over the weekend, Washington area protesters gathered at D.C.’s single monument to a Confederate leader. Albert Pike was a brigadier general in the Civil War, but his statue at Judiciary Square is dressed in plain clothes.

Just a few blocks away, however, in the U.S. Capitol building, a statue of Gen. Robert E. Lee shows him in a Confederate uniform. When the statue was placed there in 1909, it was a scandal. Today, it stands with a dozen other statues of Confederates – meaning that this single building, the flagship of the Union, commemorates the Southern states’ rebellion more than nearly every city in the South.

Lee lived only five more years after the end of the Civil War. But in that time, he made it clear how he felt about memorials to the failed insurrection.

“I think it wiser,” he wrote in an 1869 letter, “not to keep open the sores of war but to follow the examples of those nations who endeavored to obliterate the marks of civil strife, to commit to oblivion the feelings engendered.”

Southern states ignored this advice, building a few monuments each year for decades.

But then, in the early 20th century, arose the “Lost Cause of the Confederacy,” a revisionist-history narrative that depicts the South’s secession and defeat as heroic and even patriotic. As the Southern Poverty Law Center has catalogued, from 1900 and into the 1930s, Confederate monuments sprang up everywhere in the South at a record pace. Statues of Lee – the Confederate commander and a cruel slave owner who had been recast as a gentle, reluctant warrior – were particularly popular.

Amid all this, the Virginia General Assembly took up the selection of who would represent the Old Dominion in the Capitol’s National Statuary Hall. A law passed in 1864 invited each state to send two statues of notable citizens to occupy the old House chamber in a “national Valhalla.” Virginia was understandably occupied with other matters at the time, and so, like many states, didn’t get around to sending the statues until decades after the invitation was sent.

George Washington snagged the first spot. But the General Assembly voted down other favorite sons – Thomas Jefferson, James Madison, James Monroe – in favor of Lee. The Washington Post reported that there was “some thought that perhaps the time was inopportune, and that the matter would be better deferred.”

When the rest of the country found out about it, there was “a plentiful stirring up of sectional feeling,” The New York Times reported. An Idaho senator called it a “desecration.” Kansas Rep. Charles Curtis said: “I think it is a disgrace. He was a traitor to his country, and I will not sanction an official honor for a traitor.”

Other Kansas politicians threatened to send a statue of John Brown, the Kansas abolitionist who led an armed insurrection at Harpers Ferry, Va., to the Capitol. A Michigan representative submitted a sarcastic bill to build a Brown statue in Richmond.

In Chicago, the Union veterans group Grand Army of the Republic denounced the statue, saying that it went “against the honor and integrity of veterans who nobly gave up life and home to preserve the country Robert E. Lee tried to destroy.”

But they were powerless to stop it. The law said that the states could send a statue of any deceased citizen “illustrious for their historic renown” or “distinguished civic or military services” to the Capitol as a gift. It was Virginia’s choice.

The Lee statue was quietly installed without fanfare in August 1909, but a dam had broken in the Lost Cause. Over the next 20 years:

– Alabama sent a statue of Confederate cavalryman Joseph Wheeler. The Architect of the Capitol, which oversees the care of the collection, describes Wheeler on its website as an “outstanding cavalryman” who “saw action in many campaigns.” It does not mention that Wheeler oversaw the massacre of hundreds of freed slaves at Ebenezer Creek in 1864.

– South Carolina sent a statue of Wade Hampton, a Confederate brigadier general who fought at Gettysburg.

And in 1931, when Mississippi chose both Confederate president Jefferson Davis and Confederate colonel James Z. George to represent the state, there was a crowded ceremony at the Capitol to install them. The U.S. Marine Band played, the House and Senate chaplains both gave invocations. According to The New York Times, “it was an emotional audience, full of sentiment for the lost cause.”

Three other statues depict West Virginia’s John E. Kenna, Louisiana’s Edward Douglass White and Arkansas’s Uriah Milton Rose, who played smaller roles in the Confederacy and were memorialized for other reasons. Alabama originally sent an additional Confederate statue, but it was later swapped out for Helen Keller.

Eventually, the 100 statues in the states collection outgrew the space provided, and most have been dispersed throughout the Capitol. Four of the Confederate statues are now in the Capitol Visitors Center. Kenna is in the Hall of Columns. Lee and Calhoun have been moved to the crypt. But five – Davis, Rose, Stephens, Vance and Wheeler – remain on display in National Statuary Hall.

According to legislation enacted in 2000, any state can request a replacement statue with a resolution approved by both the state’s legislature and its governor.

On Tuesday, after watching the unrest in Charlottesville “with horror,” North Carolina Gov. Roy Cooper said he would seek the removal of all Confederate monuments in the state. (In Durham, some people had already taken the removal of one of those monuments into their own hands.) It is unclear whether Cooper will also try to replace the statue of Vance at the U.S. Capitol.

If the Commonwealth of Virginia decided to replace the Lee statue, it would have many illustrious Virginians to choose from. Among others, it could choose Nat Turner, Booker T. Washington or Lawrence Wilder, the first African American to be elected as Virginia’s governor.

The statue of Lee in the Capitol could even conceivably be replaced by a Virginian who died protesting another public monument to Lee: Heather Heyer. It’s Virginia’s choice.