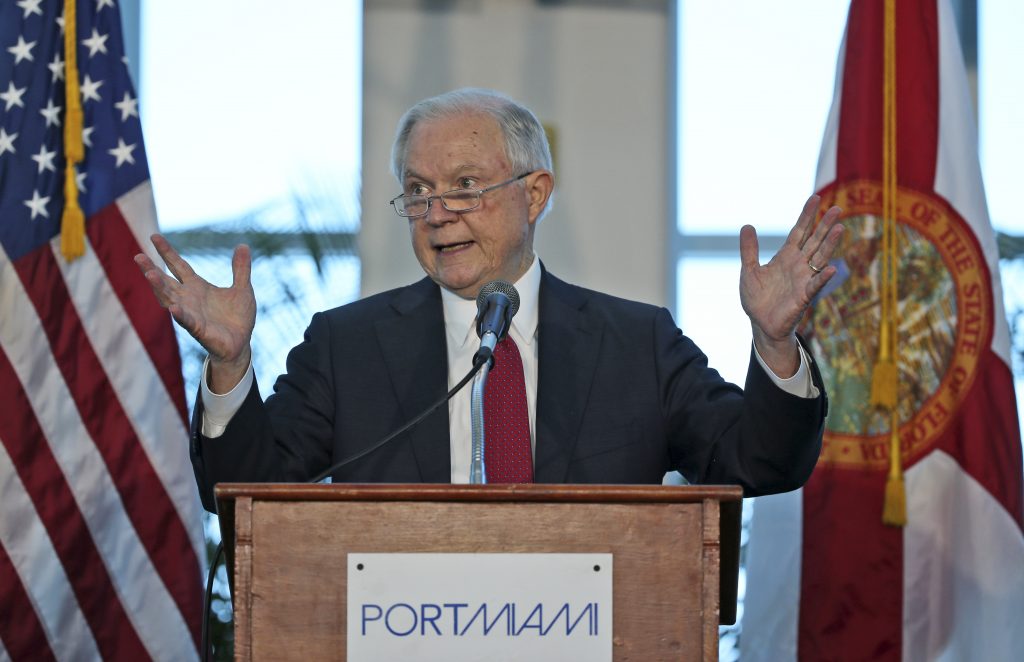 In a speech in Miami, Sessions said that in Chicago “respect for the rule of law has broken down,” and he linked the increase in crime there last year to the city’s “so-called ‘sanctuary policies.'”

“Every year, too many Americans’ lives are victimized as a result of sanctuary city policies, whether it be theft, robbery, drugs, assault, battery, and even murder,” Sessions said. “We want to do everything we can to help state and local law enforcement, which is why we have federal grants to cities designed to aid in crime reduction.

“But we cannot continue giving federal taxpayer money to cities that actively undermine the safety and efficacy of federal law enforcement and actively frustrate efforts to reduce crime in their cities. So if voters in Chicago are concerned about losing federal grant money: Call your mayor.”

Sessions’ comments came a little more than a week after Chicago, which is struggling to combat a recent surge in violent crime, filed a federal lawsuit against the Justice Department over its plan to withdraw grants.

In announcing the lawsuit, Chicago Mayor Rahm Emanuel (D) said that his city “will not be blackmailed into changing our values.”

On Wednesday, in response to Sessions’ latest comments, Emanuel invoked the controversy that has enveloped the White House over President Trump’s responses to the violence that erupted in Charlottesville this past weekend.

“In a week in which the Trump administration is being forced to answer questions about neo-Nazis, white supremacists, and the KKK, they could not have picked a worse time to resume their attack on the immigrants who see America as a beacon of hope,” Emanuel said in a statement. “Chicago will continue to stand up proudly as a welcoming city, and we will not cave to the Trump administration’s pressure because they are wrong morally, wrong factually and wrong legally.”

“Americans – all Americans – have a right to full and equal protection under law,” said Sessions. “No one understands this better than the Cuban Americans here in Miami-Dade. … They understand that no single person – whether a dictator or a mayor – should determine whose rights are protected and whose are not.”

Sessions said that the county’s homicides were a third of what they were in the 1980s. But, according to the county’s police statistics, other serious crimes including murders and assaults, are all up in Miami-Dade from where they were at this point last year.

Chicago has also been combating a surge in violent crime, an issue that Trump repeatedly cited during his presidential campaign and since taking office. The city had 762 homicides in 2016, more than the combined total reported by New York and Los Angeles, the only two American cities with larger populations. There have been 428 murders in Chicago so far this year, down from 440 at the same point in 2016, according to police data. The city has also seen 1,811 shootings, down from 2,149 at this time a year ago, the data show.

Trump has been critical of the response by officials in Chicago, saying that “they’re not doing the job” and suggesting in an interview this year that perhaps the police were being “overly politically correct.”

Sessions took aim at a city that federal officials have also pledged to help. Police have pointed to illegal guns and gang activity as explanations for the increase in crime and have called for harsher sentencing for people convicted of gun crimes. In June, Chicago police and federal authorities announced a new partnership aimed at cracking down on illegal guns.

“I have said it before and I will say it again, undocumented immigrants are not driving violence in Chicago and that’s why I want our officers focused on community policing and not trying to be the immigration police,” Eddie Johnson, the Chicago police superintendent, said in a statement.

Rather than helping combat crime, Johnson said, “the federal government’s plans will hamper community policing and undermine the work our men and women have done to reduce shootings by 16 percent so far this year.”

During the final days of the Obama administration, the Justice Department released the findings of a civil rights investigation concluding that the city’s police department has a pattern of using excessive force and violating the constitutional rights of residents.

City officials pledged to negotiate with the federal government on a court-enforceable order governing police reforms, but that has been thrown into limbo since Sessions was confirmed as attorney general. Sessions, who has been critical of these orders, has instructed Justice Department officials to review all such agreements nationwide.