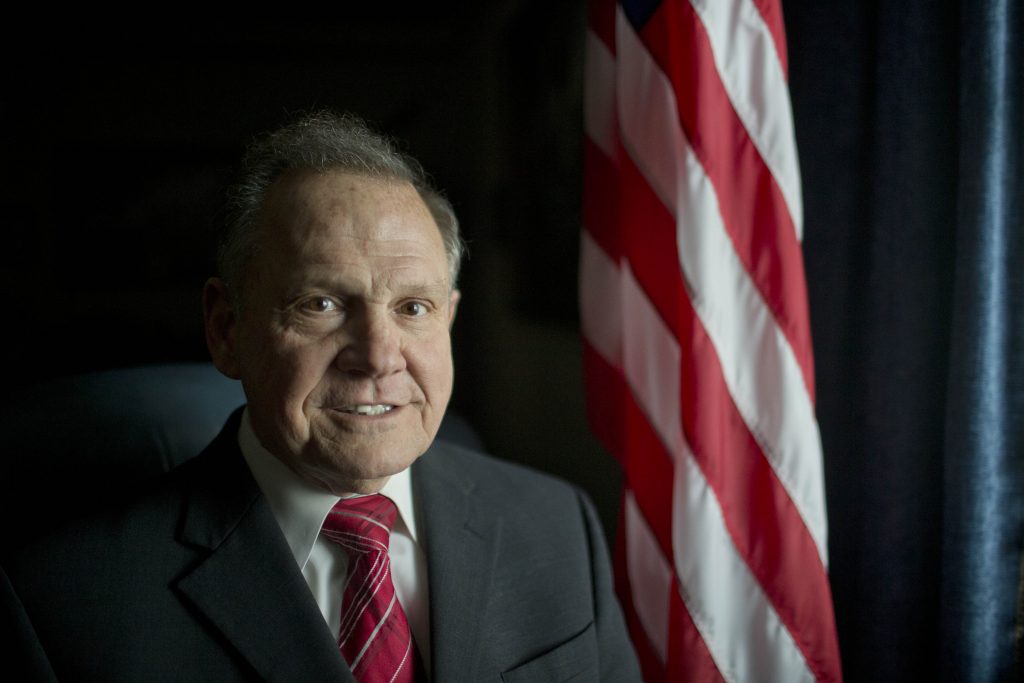 Evangelical voters cherish Moore as a culture-war icon after he was twice stripped of his chief justice duties, for refusing to remove a biblical monument he installed in a state judiciary building.

On Tuesday, the firebrand jurist rode a tide of anti-establishment sentiment to secure more votes than Strange for the seat previously held by Attorney General Jeff Sessions.

Despite millions of dollars in advertising by a super political action committee tied to Senate Majority Leader Mitch McConnell, Strange trailed Moore by about six percentage points, which was about 25,000 votes in the low-turnout election, according to unofficial returns.

“This is a great victory. The attempt by the silk stocking Washington elitists to control the vote of the people of Alabama has failed,” Moore said at his victory party in downtown Montgomery, where a copy of the Ten Commandments was among the decorations.

The winner of the Sept. 26 runoff between Moore and Strange will face Democratic nominee Doug Jones in a December election.

While President Donald Trump endorsed Strange, Moore tried to present himself as the better carrier of Trump’s outsider appeal.

“The takeaway is that Washington is very unpopular,” said Greg Strimple, a Republican pollster for a political action committee aligned with House Speaker Paul Ryan.

“Voters still want change,” Strimple said, and Trump cannot simply “transfer his brand” to candidates who fail to establish their own outsider credentials.

Strange emphasized Trump’s endorsements, delivered via Twitter and in recorded phone calls to voters — in the state where Trump remains deeply popular among GOP voters.

“He knows I’m the person in this race who is going to help him make this country great again,” Strange said, thanking Trump Tuesday night. He said the runoff will show “who is best suited to stand with the people of this country — with our president — to make sure we make America great again.”

Trump tweeted congratulations Wednesday to both Moore and Strange “for being the final two.”

Strange was Alabama’s attorney general before being appointed to the Senate by Gov. Robert Bentley, who soon resigned in scandal. Strange said he did Bentley no favors, but his challengers questioned the ethics of seeking the appointment while investigating the governor.

Moore has a loyal following among evangelicals, but is a polarizing figure. His harshest critics call him the “Ayatollah of Alabama” and accuse him of intertwining his personal religious beliefs and judicial responsibilities.

Moore wore his ousters from the bench as badges of honor, telling Republican voters they are like battle scars.

“He’s the only one who hasn’t been talking … about the others,” said Jimmy Wright, who voted for Moore in rural Gallant in northeast Alabama.

But in Montgomery, retired teacher Tommy Goggans said he voted to try to keep Moore from winning. “He’s been kicked out of everything he’s done.”

Jones, the Democratic nominee, served as a U.S. attorney during the Clinton administration and is backed by former Vice President Joe Biden. He’s perhaps best known for leading the prosecution that finally resulted in convictions for two Klansmen in the 1963 bombing of a Birmingham church that killed four little girls.

Alabama hasn’t sent a Democrat to the U.S. Senate in 20 years, but Jones says they can’t concede without a fight.

“I think there are enough people in the state who are yearning for new leadership and a change,” Jones said.