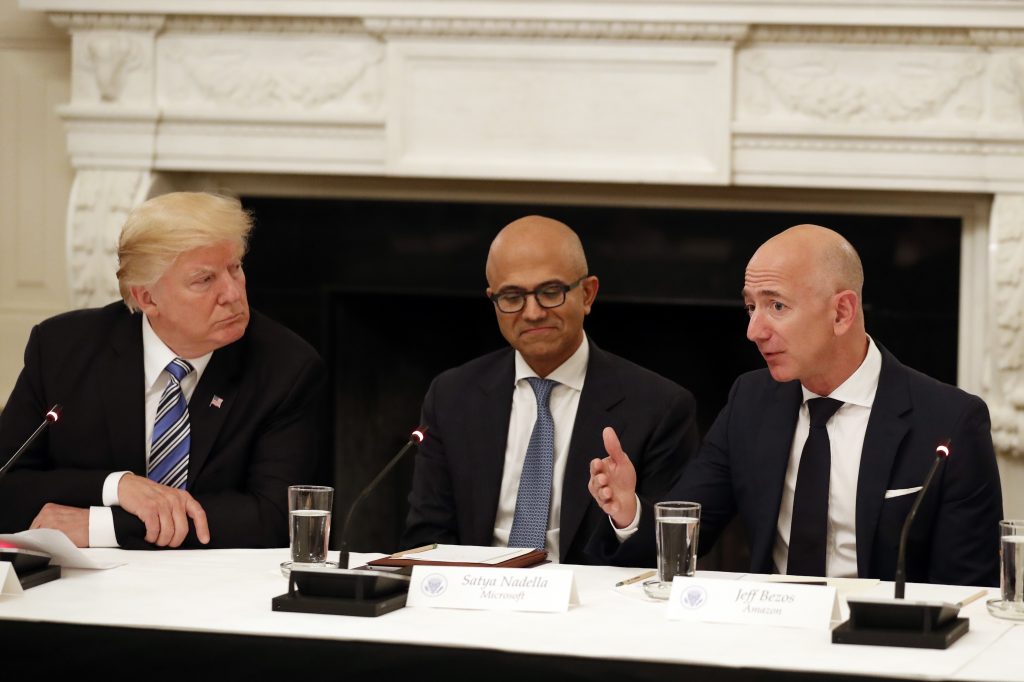 Trump, in a tweet, said that “towns, cities and states throughout the U.S. are being hurt — many jobs being lost!”

The president has been a frequent critic of the company and CEO Jeff Bezos, who also owns The Washington Post.

Many traditional retailers are closing stores and blaming Amazon for a shift to buying goods online. But the company has been hiring thousands of warehouse workers on the spot at job fairs across the country. Amazon has announced a goal of adding 100,000 full-time workers by the middle of next year.

Trump has said that Amazon does not pay “Internet taxes,” but it’s unclear what he meant by that. Amazon.com collects state sales taxes in all 45 states with a sales tax and the District of Columbia, according to their website. State governments have sought to capture sales taxes lost to internet retailers, though they have struggled with a 1992 Supreme Court ruling that found that for a state to collect sales tax from retailer, the retailer must have a physical presence within state borders.

The issue arose recently in South Carolina, which is attempting recoup tax revenue it says it’s owed in court. This summer, the state Department of Revenue filed a case with the Administrative Law Court, alleging that Amazon had failed to collect taxes on third-party merchant sales.

Third-party merchant sales involve items that can be bought on Amazon.com, but the company acts solely as a middleman between buyers and sellers. Amazon processes the payments and offers other support to the parties involved.

The state claims that Amazon owes the state $12.5 million in taxes, penalties and interest from first quarter of last year alone, according to the complaint obtained by The Associated Press.

Amazon had a five-year moratorium on taxes, the state wrote in the complaint, giving the company “fair warning that its sales of tangible personal property in South Carolina subjected it to South Carolina’s taxing jurisdiction.”

The state’s case is in the early stages, and a court date has not been set.

For years, the Seattle company fought against collecting sales taxes from its customers. According to the National Conference of State Legislatures, South Carolina was among 10 states that initially gave Amazon a temporary tax reprieve in exchange for jobs and investment, voting in 2011 to give the company until the beginning of 2016 before the state levied taxes.

According to the conference, that deal made South Carolina the last state to collect among those where officials cut similar deals with Amazon. The company promised to create at least 2,000 full-time jobs and invest $125 million by Dec. 31, 2013. It opened two distribution centers in the state.

Max Behlke, who has been tracking this issue for the conference, told AP Wednesday that dozens of states have been grappling with how to collect taxes from entities like Amazon, with several heading to court over it in recent years. As for the South Carolina case, Behlke said it could lead to more actions elsewhere.

“If the court ends up ruling in favor of the state, then I can almost guarantee you that we’re going to see other state tax departments handling it similarly, too,” he said.

Amazon did not immediately respond to an emailed request for comment.