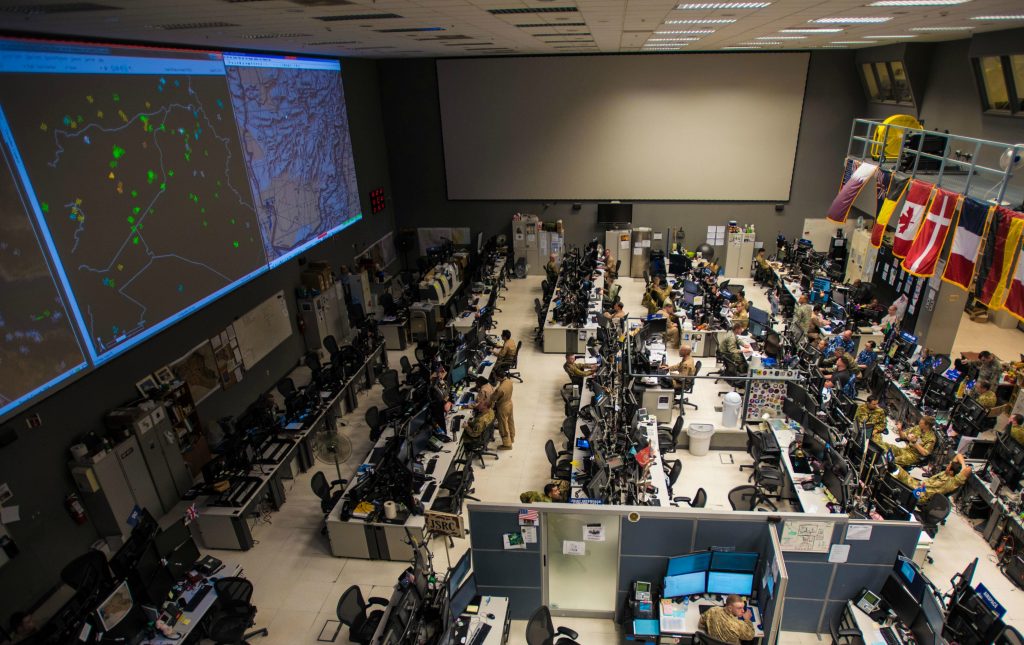 With its wall-sized screens simultaneously showing America’s air wars in Iraq, Syria and Afghanistan, this war room at the heart of America’s biggest military campaigns is already something of a technological marvel.

“It’s state of the art but too slow for the future,” said General David Goldfein, chief of staff of the Air Force, who is visiting the center at Qatar’s Al Udeid Air Base this week with Air Force Secretary Heather Wilson.

Enter innovation to bridge the gap. The Qatar-based operations center is undergoing a series of upgrades to its top-secret computer systems to transform how war planners here do business.

The Combined Air Operations Center, known in military-speak as the “CAOC,” is grappling with a dizzying amount of data and intelligence flowing in from sources like satellites, drones, radar and U.S. aircraft flying over Middle East hot spots and bombing Islamic State positions.

Lieutenant General Jeffrey Harrigian, head of U.S. Air Force’s operations throughout the region, has championed the technology push with Goldfein’s support to take better advantage of that data.

That will often mean lessening the roles of humans in jobs that can now be done more efficiently and accurately by computer software.

New software is being developed in partnership with the Pentagon’s Silicon Valley arm, known as the Defense Innovation Unit Experimental, the goal of which is to speed delivery of technology to the front lines.

“I saw an opportunity to provide a tool to our airmen in a short period of time that would not only improve our effectiveness but our efficiency,” Harrigian said in an interview, adding that the effort got underway last year.

One such application in the works will simplify the way the Air Force plans air strikes against potential targets, consolidating data from separate programs that, as of now, do not synch with each other.

Perhaps the biggest advancement so far is a software tool introduced early this year that is already guiding one of the most logistically complicated missions of the wars – refueling U.S. warplanes while they are in flight.

Previously, war planners used an excel worksheet and a white board to pair U.S. warplanes with specialized “tanker” jets that can refuel them in the air.

It used to take a planning team a combined 35 to 40 hours each day to get the job done. With the new software, that time has been cut in half, the Air Force said.

The so-called “tanker planning tool” was also developed in months, not years, something that is an anomaly in the Pentagon’s often laborious acquisition system.

“The standard acquisition system was not going to get us the product we wanted,” Harrigian said, explaining that his own team could sit next to the coders, telling them what they needed the tanker planning tool to do.

Harrigian said his team in Qatar has also taken important steps to improve the way it reviews intelligence data, helping him to view battlefield trends in new ways.

Of particular interest to Harrigian are air defenses in Syria, employed by Russian and Syrian forces.

“I said, ‘I need a better understanding of a pattern of life of what the Syrian and Russian (integrated air defenses) are doing,'” Harrigian said.

“So those guys reached back to locations in the States where they had basically the software and infrastructure.”