Send Me the Clip 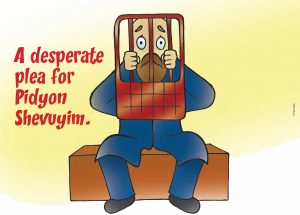 We both had arrived at virtually the same time to the entrance of the sefarim store, only to discover that it was already closed. While the store did have late hours for most of the year, as the sign on the door stated, during July and August, they closed at 8:30 at night, and it was already past 10:00.

“Perhaps when Moshiach will come, sefarim stores will be open 24 hours a day,” I quipped to my fellow would-be-customer, whom I did not recall ever meeting before, but who clearly shared my disappointment.

He took a picture of the sign on the door with his smartphone before responding.

“You mean to say that all sefarim will be available to download on a Kindle?” he asked me.

“Not quite,” I responded. “I meant real sefarim in a real store. Besides, I am quite confident that when Moshiach will come, all these devices will disappear.”

The sense of puzzlement on the Yid’s face was obvious, and so I hastened to explain.

“Granted, when Moshiach comes, the evil inclination will disappear, so presumably the spiritual dangers of these devices will no longer pose a threat. But even if they would only be used for proper purposes, they are still, in the greater scheme of things, a source of an inordinate amount of stress and tension in our lives, and we would live much happier lives without them.”

As we stood together under the street light, the Yid thought for a long moment, turning briefly to the smartphone in his hand before answering me.

“Some … would call that being a Luddite,” he said.

“I would call that a realist,” I softly replied.

“I will think about it,” he told me as he began to walk away, his eyes glued to whatever was on his smartphone.

The exchange reminded me of the time I interviewed an elderly Russian immigrant, who had lived in a city not far from the town of Vilednik.

She described to me how the Jews under communist rule were moser nefesh to travel to the kever of Harav Yisrael, the Rebbe of Vilednik, whom she simply described as the “Viledniker Tzaddik.”

In the course of the interview, she revealed that when Stalin died, she, along with many other Jews wept bitterly.

Having been educated in communist schools, she had been brainwashed into truly believing that this vicious despot who had murdered so many Jews was a kind and caring leader.

“It was only later that I discovered what he was really all about,” she told me.

Perhaps an even more fitting analogy for the relationship so many in our community have with their hand-held devices is something known as the “Stockholm Syndrome.”

This unique syndrome, which is described by Webster’s as “a psychological tendency of a hostage to bond with, identify with, or sympathize with his or her captor,” received its name from a 1973 bank robbery in Stockholm, Sweden. Four employees of the Sveriges Kreditbanken were held captive in the bank vault by a gunman for over 130 hours. When they were finally freed by police, it was discovered that they viewed the police who had come to rescue them as their enemy, had formed an emotional bond with their captor, and even later went to visit him in prison.

Only a few short years ago, most people worked eight hours a day and even the most demanding of employers, barring an emergency, wouldn’t even consider contacting an employee after work hours. Dinner was strictly family time and, most importantly, times set aside for davening, attending a shiur, or learning Daf Yomi b’chavrusa were sacrosanct, free of all work-related matters. Walking outdoors alone was a time of relaxation, treasured time that we had for ourselves.

Relationships, whether between relatives or close friends, were based on actual emotions. Communications were all about conveying inner thoughts and real feelings, with the tone of voice playing a key role.

Nowadays, in an era of smartphones and instantaneous communications, we are enslaved to our own devices. We are expected to respond to emails and text messages from early morning until late at night, from employers and customers alike. Whether at the supper table, at a shiur, a wedding, or walking down the street, the smartphone reigns supreme, shoving everything and everyone out of its way. Texting, that cryptic shorthand that has led to so much havoc and miscommunication, has to a large degree replaced speaking, leaving a trail of battered interpersonal relationships along the way.

Perhaps the worst part of it all, we have actually bonded with our captor, and don’t even realize and recognize what is so dreadfully wrong with the lives so many of us are leading.

I recently saw a marvelous cartoon that encapsulated the issue perfectly.

It was an image with Har Sinai in the background, and a Yid telling his friend that the Ribbono shel Olam is about to give us the Torah, and they had better hurry to be there on time.

Without taking his eyes off his phone, the other Yid rejoins, “I’m busy now. So send me the clip and I will watch it later.”

For nearly 2000 years we have been waiting to hear the Shofar of Moshiach. But unless we take steps to take back control of our lives from the gadgets in our hands, there is real reason to worry that far too many of us will prefer the clip instead.

This opinion originally appeared in a daily edition.