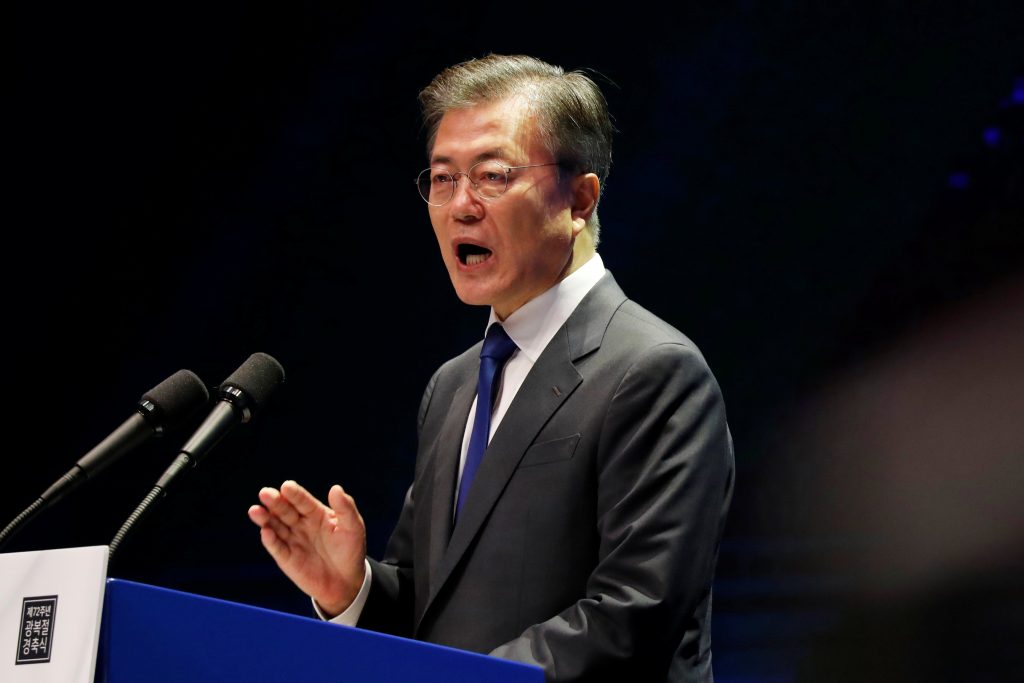 South Korean President Moon Jae-in has signaled his country will no longer stay quiet as tensions escalate between the U.S. and North Korea.

In a forceful speech on Tuesday, Moon asserted the right to veto any military action against Kim Jong Un’s regime, saying that decision should be made by “ourselves and not by anyone else.” He vowed to prevent war at any cost — a statement that drew a sharp contrast with President Donald Trump, who has warned of “fire and fury” if North Korea continues to threaten the U.S.

“Moon’s speech speaks to his frustration, and his nation’s wider frustration — and that is the perennial problem that they are not masters of their own destiny when it comes to North Korean geopolitics,” said Euan Graham, a director at the Lowy Institute in Sydney. “The U.S. now sees itself as the primary concern and the South Koreans as a secondary concern.”

Moon’s speech risks exacerbating a rift between the U.S. and South Korea over the best approach to dealing with North Korea. Any divisions among America and its allies may further embolden Kim, who is seeking the ability to strike the U.S. with a nuclear weapon as a way to deter an invasion that could overthrow his regime.

Moon, a former human-rights lawyer whose parents fled North Korea during the Korean War, took power in May promising a softer approach to Pyongyang after nine years of conservative rule that ended in a messy impeachment trial. He raised questions about a U.S. missile shield, pushed for dialogue with Kim and sought to mend ties with China, North Korea’s main ally and benefactor.

Just a few months later, however, North Korea’s tests of intercontinental ballistic missiles forced him to embrace the missile shield and agree to tighter sanctions against Kim. His calls for a peace treaty and dialogue have been drowned out by the war of words between Trump and Kim.

The Moon administration’s evaluation of the situation on the peninsula “was quite naive,” said Kim Dong-yub, an analyst at the Institute for Far Eastern Studies at Kyungnam University in Seoul. “They simply thought the North would be more nice and slow-paced when they took office, but seven missiles later — they’re obviously overwhelmed.”

Even worse for Moon, some U.S. officials have signaled that they’d be willing to tolerate collateral damage in Seoul to protect the American homeland. South Carolina Sen. Lindsey Graham, a Republican, told NBC News that Trump told him that “if thousands die, they’re going to die over there.” Joseph Dunford, chairman of the U.S. Joint Chiefs of Staff, said last month that it was “unimaginable” for North Korea to develop a nuclear-tipped ICBM.

Seoul’s 10 million people are within firing range of North Korea’s artillery, and would likely suffer the brunt of the first retaliatory blows in a U.S. strike. While the city regularly shrugs off North Korea’s threats to turn it into a “sea of fire” — and Moon’s approval rating has stayed above 70 percent — Trump’s rhetoric spurred more calls for the president to get tough.

“Peace can’t be secured by begging and pleas,” the conservative-leaning Chosun Ilbo, one of South Korea’s biggest newspapers, wrote in an editorial published Tuesday before Moon’s speech. Korea JoongAng Ilbo said on Aug. 12 that his administration appears “helpless.”

One problem for Moon is that North Korea has little interest in talking to South Korea, in part because Kim sees the U.S. and its nuclear capability as a much bigger threat to his regime. The U.S. has almost 30,000 troops in South Korea, and protects it with a so-called nuclear umbrella.

Another irritation for Moon is that the U.S. calls the shots if hostilities break out, a legacy of the Korean War in the 1950s. While plans to transfer full operational control to South Korea were agreed on in 2005, the transition has been repeatedly delayed because of budgetary constraints and rising tensions.

Moon has pushed to complete the handover during his five-year term. On a visit to the White House in June, Moon and Trump agreed to “expeditiously enable the conditions-based transfer of wartime operational control” of South Korean forces.

For now, tensions appear to be calming down. North Korea’s state-run news agency reported on Tuesday that Kim would wait “a little more” before carrying through with a threat to fire four missiles over Japan into waters near Guam, home to key U.S. military bases in the Pacific.

Tensions may yet rise again ahead of U.S.-South Korea military drills slated to start Aug. 21. Some 50,000 South Korean soldiers and about 25,000 U.S. troops participated last year over two weeks in the so-called Ulchi Freedom Guardian exercises.

Apart from the difficulties in pushing back against Trump, Moon’s pledge to veto any military activity on the Korean Peninsula is unrealistic for another reason, according to Graham from the Lowy Institute.

“The problem,” he said, “is that North Korea gets a vote on who uses military force on the peninsula.”