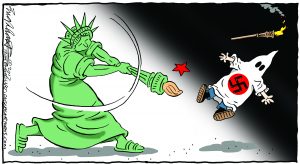 The horrific attack in Charlottesville, Virginia, reminds America once again that Islamic extremists do not have a monopoly on terrorism. Taking a page right out of the playbook of IS and other Moslem terrorists, James Alex Fields Jr., a 20-year-old Ohio native, illustrated that one does not need a gun or even a knife to cause destruction and mayhem. When driven into a crowd by a hate-filled monster, a 2010 Dodge Challenger can become a most deadly weapon.

We join with all Americans in expressing our deepest condolences to the family and friends of Ms. Heather Heyer, who was viciously killed in what Attorney General Jeff Sessions has rightfully described as an act of “domestic terrorism,” as well as the family and friends of the two troopers killed when their helicopter, which had been deployed in response to the violent demonstration, crashed. We wish a speedy and full recovery to all the injured.

Fields, the terrorist who committed this reprehensible attack, has been described by one of his teachers as someone who had a “fascination with Nazism and a big idolatry of Adolf Hitler,” and was filled with admiration for the German military and the Waffen SS.”

As tempting as it would be to try to describe what happened in Charlottesville as an isolated incident, recent history has taught us that the threat posed by neo-Nazis and white supremacists is very real and very dangerous.

In April 2014, Frazier Glenn Miller Jr., the founder of the Carolina Knights of the Ku Klux Klan in his native North Carolina and the White Patriot Party, killed three individuals at two Jewish sites in Overland Park, Kansas. Though his intention was to kill Jews, none of his victims were Jewish. After he was convicted, Miller raised his right arm in the Nazi salute.

In November 2015 two white supremacists were arrested in Richmond, Virginia, and charged with a plot that was to involve “shooting or bombing the occupants of black churches and Jewish synagogues” and “conducting acts of violence against persons of the Jewish faith.”

Last May, a self proclaimed white nationalist and member of a neo-Nazi group called Atom Waffen, which is German for “atomic weapon,” was arrested in Florida and charged with possession of unregistered destructive devices and unlawful storage of explosive material. Brandon Russell participated in neo-Nazi chat rooms where he threatened to kill people and blow up places.

It is telling, and deeply disturbing that white nationalists were declaring victory after the bloody weekend in Virginia.

“We’re going to be more active than ever before,” Matthew Heimbach, a white nationalist leader, said Monday.

Experts now believe that the number of unaffiliated white supremacists now far outnumber those who formally belong to actual groups, making them even harder to track and keep an eye on.

Like IS and other Islamic terror groups, white supremacists extensively use social media to network and spread their hate-filled propaganda, and a lot must be done to counter their efforts and battle them on their own turf in cyberspace.

As President Trump stated on Monday, “Racism is evil. And those who cause violence in its name are criminals and thugs, including the KKK, neo-Nazis, white supremacists, and other hate groups that are repugnant to everything we hold dear as Americans… Those who spread violence in the name of bigotry strike at the very core of America.”

It is vital that the danger posed by homegrown terrorists, whether they are inspired by white nationalists and neo-Nazis or by radical Islamic preachers, be taken as seriously as that posed by foreign terror groups. Every effort must be made to track down and expose those who peddle in hate, and take every measure permitted by American law to stop them before they have a chance to commit heinous acts of terror.