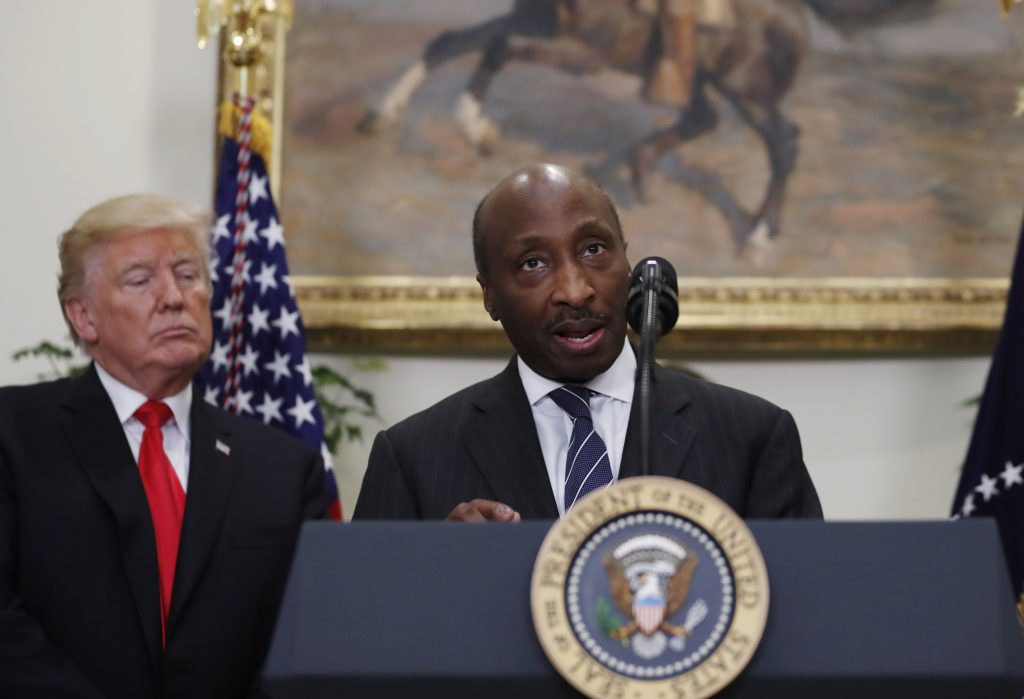 The parade of departing leaders from the informal panel now includes the chief executives for Merck, Under Armour and Intel and the president of the Alliance for American Manufacturing.

Alliance president Scott Paul, in a tweet, said simply, “I’m resigning from the Manufacturing Jobs Initiative because it’s the right thing for me to do.” Within minutes of the tweet, calls to Paul’s phone were being sent to voicemail.

Wal-Mart CEO Doug McMillon joined the chorus, saying in a note to employees, “(We) too felt that he missed a critical opportunity to help bring our country together by unequivocally rejecting the appalling actions of white supremacists.”

But McMillon, whose business has customers on all sides of the political spectrum, did not address his own positon on a separate Trump advisory panel.

Corporate leaders have been willing to work with Trump on taxes, trade and reducing regulations, but they’ve increasingly found themselves grappling with cultural and social divides amid his lightning rod-style of leadership. The CEOs who left the council quickly faced his wrath.

On Tuesday, Trump tweeted, “For every CEO that drops out of the Manufacturing Council, I have many to take their place. Grandstanders should not have gone on. JOBS!”

Merck CEO Kenneth Frazier, one of only four African-Americans to lead a Fortune 500 company today, was the first to tender his resignation Monday.

He was assailed almost immediately by Trump on Twitter.

Then came resignations from Under Armour CEO Kevin Plank and then Intel CEO Brian Krzanich.

Austan Goolsbee, the former chief economist for President Barack Obama, said the departures suggest the president’s response to the violence in Charlottesville could alienate those who work for the companies, and those who buy the products and services that they sell.

There had already been departures from two major councils created by the Trump administration that were tied to its policies.

Tesla CEO Elon Musk resigned from the manufacturing council in June, and two other advisory groups to the president, after the U.S. withdrawal from the Paris climate agreement. Walt Disney Co. Chairman and CEO Bob Iger resigned for the same reason from the President’s Strategic and Policy Forum.

The manufacturing jobs council had 28 members initially, but it has shrunk since it was formed earlier this year as executives retire, are replaced, or, as with Frazier, Musk, Plank, Paul and Krzanich, resign.

Dan Eaton, a business ethics instructor at the San Diego State University Fowler College of Business and a partner at San Diego-based law firm Seltzer Caplan McMahon Vitek, said that while CEOs may feel it is their civic duty to serve the president, their responsibility ultimately is to their shareholders, employees and customers.

“That’s something that’s always in play, and as a result, some companies choose to abstain from getting involved in political roles,” he said.

Eaton said that the potential for a public rebuke from a sitting president is not a concern only to those now on advisory panels, but to all who may be asked to serve in the future.

Already, there is a push on social media lobbying other executives to distance themselves from Trump, and resign.

So far, the majority of CEOs and business leaders that are sitting on the two major, federal panels, are condemning racism, but say they want to keep a seat at the table.

“Our commitment to diversity and inclusion is unwavering, and we will remain active champions for these efforts,” said a spokesman for Campbell Soup for CEO Denise Morrison. “We believe it continues to be important for Campbell to have a voice, and provide input on matters that will affect our industry, our company and our employees in support of growth. Therefore, Ms. Morrison will remain on the President’s Manufacturing Jobs Initiative.”

Lawrence Summers, once the chief economist at the World Bank and senior Treasury official, wondered when more business leaders will distance themselves from Trump.

“After this weekend, I am not sure what it would take to get these CEOs to resign,” he tweeted. “Demonizing ethnic groups? That has happened.”