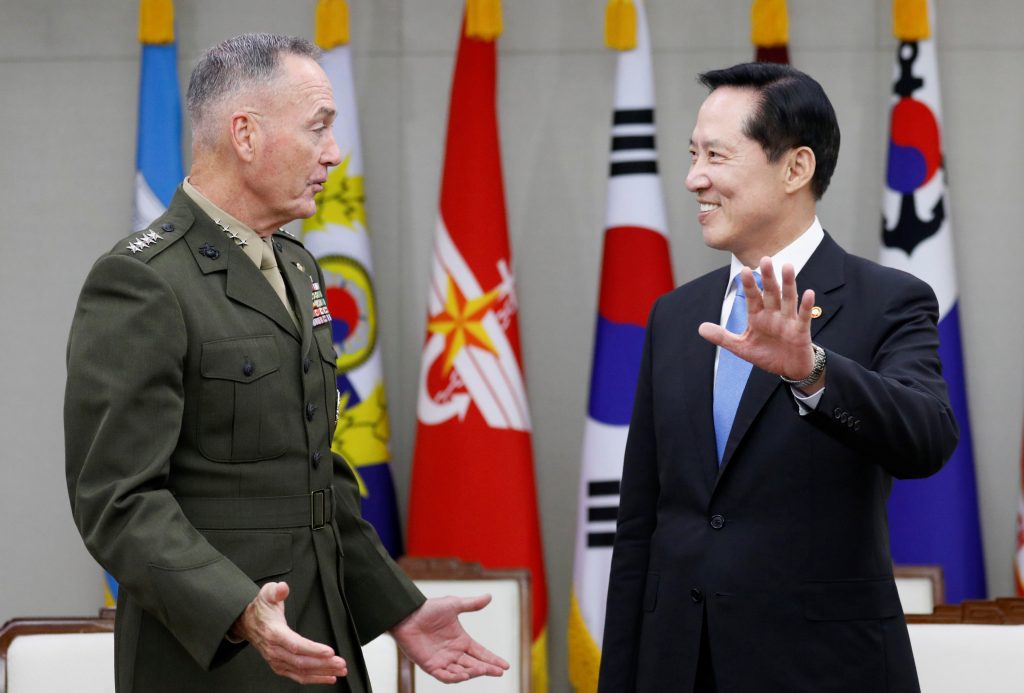 The U.S.’s top general reassured South Korea that President Donald Trump is making a diplomatic solution to tensions with North Korea his priority, as administration officials sought to tamp down fears of imminent nuclear war.

While a U.S. military spokesman said Dunford “affirmed the ironclad commitment of the U.S. to the alliance” with South Korea, he indicated the general also made clear during his meetings in Seoul that military action against North Korea remains a possibility. “He conveyed America’s readiness to use the full range of military capabilities to defend our allies and the U.S. homeland,” Captain Darryn James said in a statement.

Central Intelligence Agency Director Mike Pompeo and National Security Adviser H.R. McMaster said in separate Sunday talk show appearances that there’s no indication war will break out. Like Dunford, they walked a fine line in backing Trump’s tough talk directed at Pyongyang, but not wanting to raise the alarm at home.

The comments suggest at least a temporary halt in the war of words between Trump and North Korean leader Kim Jong Un, which sparked fears of a miscalculation that could lead to an actual military conflict. Global stocks gained and volatility receded as the prospect of war between the U.S. and North Korea appeared to cool.

“I’ve heard folks talking about that we’re on the cusp of a nuclear war,” Pompeo said on Fox News. I’ve seen no intelligence that would indicate that we’re in that place today.”

Following Trump’s vow to unleash “fire and fury” on North Korea, Kim’s regime threatened to fire four Hwasong-12 missiles over Japan into waters near Guam, home to U.S. military bases in the region. The U.S. and its allies warned Kim against such a move, and Japan deployed four Patriot missile interceptors into the western part of the country.

Some analysts expect further escalation in the coming days as both North and South Korea celebrate the Aug. 15 anniversary of the end of Japan’s occupation of the Korean peninsula, and the latter conducts joint military exercises with the U.S. from Aug. 21. Japan is also holding annual military drills with the U.S. over the next few weeks.

The U.S. hasn’t taken any public steps to prepare for hostilities, including evacuating Americans from Seoul, which is within range of North Korean artillery, or moving ships, aircraft or troops into position for an imminent response. The U.S. has about 28,500 troops stationed in South Korea.

Trump “made clear that the United States will not tolerate our citizens or our allies being threatened by this rogue regime,” McMaster said. “Our response is we are prepared militarily to deal with this if necessary.”

Pompeo said Trump’s comments were designed to send an unambiguous message to the country that it needs to disarm its nuclear weapons and that the U.S. won’t tolerate a first strike. When asked whether he was confident Kim would heed that message, he said, “It’s a very difficult situation in North Korea.”

Some former military and intelligence officials questioned whether the harsh rhetoric from the Trump administration is the right approach.

James Clapper, director of national intelligence under President Barack Obama, said on CNN that it was unclear what would set off Kim. While Trump’s goal of North Korea abandoning its nuclear weapons may be appealing, it’s unrealistic, Clapper said.

“That is their ticket to survival, and I don’t see any way that they’re going to give it up,” he said. “Our thought process here ought to be on accepting it and trying to cap it or control it.”