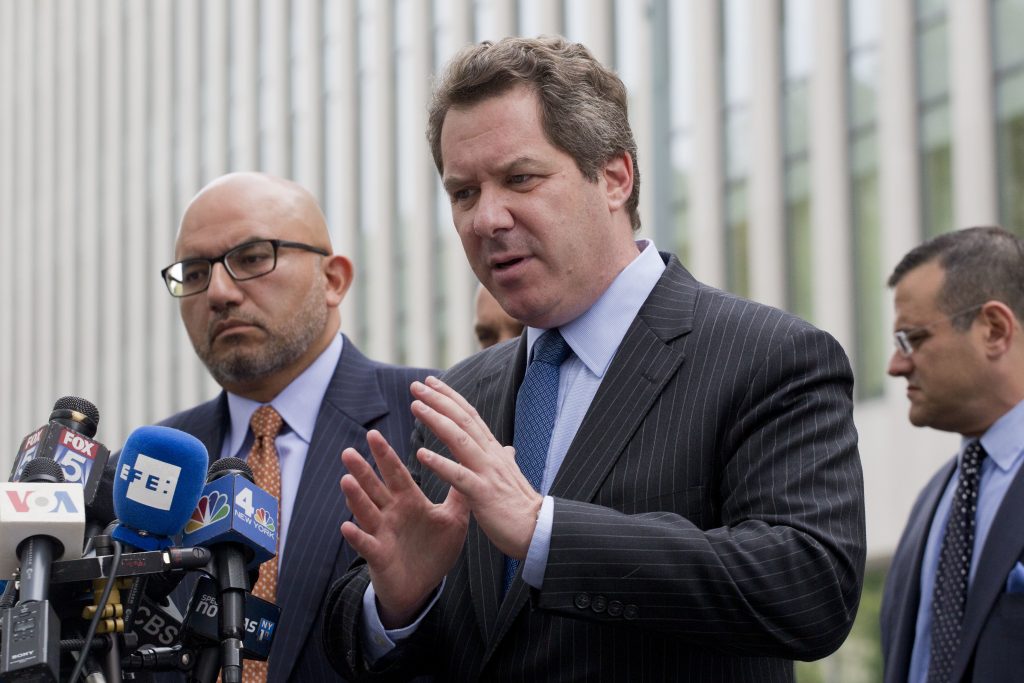 During a hearing in federal court in Brooklyn, U.S. District Judge Brian Cogan told the lawyers that if they took the case, there was no guarantee that prosecutors wouldn’t later seize their fees if they could show that the money came from his estimated $14 billion in drug profits.

“I’m not going to pressure the government to create a carve-out for counsel fees,” Cogan said.

Guzman smiled and waved at family members as he was led into the courtroom, but he didn’t speak during the brief appearance.

Afterward, the lawyers told reporters that they still hope to find a way to represent Guzman. They said they were waiting for him to consult with his sister on Thursday — the first jail visit he’s had by family member since he was brought to the U.S. from Mexico in January.

“We are looking forward, desperately, to come into this case and fight for Joaquin Guzman. … The guy has a constitutional right to the best counsel he can get,” said one of the lawyers, Jeffrey Lichtman.

Prosecutors have argued that taxpayers shouldn’t have to pay for his defense. But they also said in a letter to the court last week that the government will not “grant a blanket prospective assurance” that it won’t go after money spent on a private defense.

Lichtman is known for successfully defending John “Junior” Gotti, son of the notorious organized crime family boss, at a 2005 trial. The younger Gotti walked free after an acquittal on a securities fraud count and a mistrial on more serious racketeering counts.

The lawyer said he has met with Guzman on a weekly basis, hoping to defend him at a trial in April.

“He is charming, funny, highly intelligent. I enjoyed getting to know him. … I don’t judge someone by what I read in the papers,” Lichtman told The Associated Press last week.

Guzman has pleaded not guilty to charges that his drug trafficking operation, the Sinaloa cartel, laundered billions of dollars and oversaw a ruthless campaign of murders and kidnappings.

The defense has claimed that he’s being held in inhumane and overly restrictive conditions at a high-security jail in Manhattan known for housing alleged mobsters and terrorists.

The government has argued that his strict jail conditions are appropriate for someone who escaped from prison twice in Mexico, including once through a tunnel dug to the shower in his cell. Prosecutors said that even while he was behind bars in Mexico, Guzman used coded messages, bribes and other means to control his Sinaloa cartel and orchestrate his breakouts.