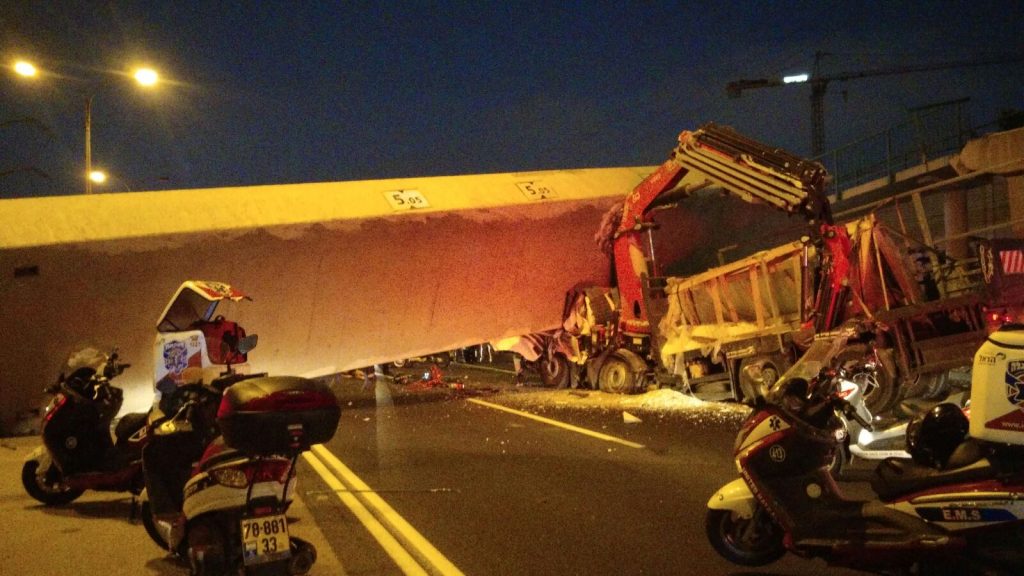 Magen David Adom has confirmed the death of the 60-year-old driver of a truck, after a pedestrian bridge collapsed on top of a truck on the outskirts of Bnei Brak on Monday evening. Another person was injured, according to media reports.

The structure, known as the Coca-Cola Bridge for its proximity to the local bottling plant, traverses Highway 4 near Givat Shmuel.

The driver and passenger were trapped inside the vehicle after the bridge came down on top of it when the truck hit the bridge. The truck was described by one MDA member as “completely crushed.”

The Netivei Yisrael National Transport Infrastructure Company said the bridge collapse was caused when the truck’s crane, which was raised to an illegal height, smashed into the bridge, according to Arutz Sheva.

Hatzalah paramedic Menachem Amsili told Arutz Sheva: “As he drove through the interchange in the direction of Rishon LeTzion, I ran into a bottleneck. I got out, and when I heard that the bridge had collapsed and people were hurt, I rushed over with my medical kit. There I joined other emergency responders who had come to the assistance of the two people” trapped under the wreckage of the bridge and the truck.

A police officer was also lightly injured in the accident and received first aid at the scene.

Meanwhile, the highway was blocked in both directions.

Deputy commander of the Dan region, Daniel Hadad, told Ynet that work at the site will continue through the night. “We have long hours of work ahead of us before the roadway can be returned to normal,” he said.