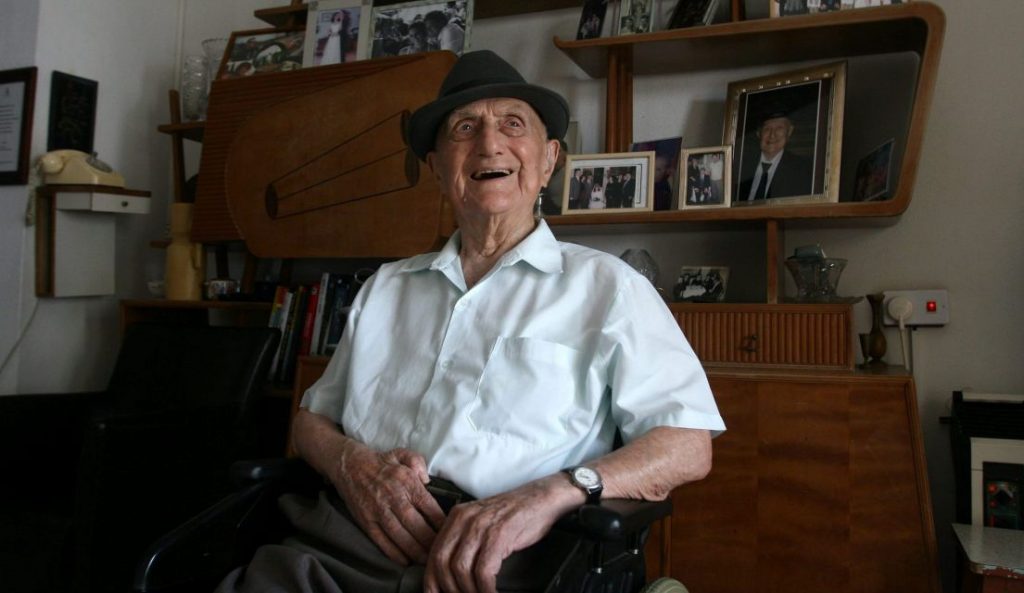 Last week, the world learned of the passing of Reb Yisrael Kristal, who, at the age of 113, was the world’s oldest man. Following is an interview with Reb Yisrael that originally appeared in Hamodia’s Inyan Magazine, issue of March 9, 2016.

“Ah, ich zei di richtige Molnitza Yidden (I see the real Molnitza Jews!)” Reb Yisrael Yitzchak Kristal, n”y, exclaimed upon seeing us, his visitors, dressed in chassidishe garb. He remembered the Radoshitz Chassidim he grew up with in the village of Molnitza (Molience).

Even after his designation as the oldest living man in the world, Reb Yisrael Kristal lives a quiet, unpretentious life in Haifa, shunning media spotlights.

A grandson of Reb Yisrael wascontacted by the Gerontology Research Group in the U.S. following the death of Yasutaro Koide in Japan, who was 112. According to the organization, Reb Yisrael is now the oldest living man on record.

Reb Yisrael, who has been putting on tefillin for 99 years and is makpid on halachah, remembers throwing sweets at Emperor Franz Josef I of Austria when he visited Poland in 1914. That was also the first time he saw a car.

He speaks about life in his hometown. “So much chessed was performed in the village [of Molnitza],” Reb Yisrael says. “I remember that every Erev Shabbos we would bring our pot of cholent to the baker, who had a large oven where all the cholent pots were kept warm until Shabbos morning. By the weight of the pot, the baker knew the financial position of every family in the village.”

And what happened to those who didn’t have anything in their pot?

Reb Yisrael replies with a smile: “Ah, those people had the most! When the other villagers saw that one of the pots was essentially empty, they quickly put some of their cholent into that pot. As a result, when the family came to take back their pot for the seudah, they had the most cholent.”

Speaking about the Jewish cemetery in Zarnow, his birthplace, Reb Yisrael is moved. “How many tzaddikim and kedoshim are buried in that cemetery!” He then names many of them.

He notes the kadosh Reb Henich Kozlowski, Hy”d, who owned a foodstore in Zarnow. A jealous local gentile, who also had a supermarket, always sought an opportunity to harm Reb Henich. His chance came when the Russians occupied the village. The gentile told an officer that Reb Henich spoke against the Russians. When Reb Henich heard this, he went into hiding. However, the Russian officer took ten Jews to the courtyard of the local shul, declaring that if Reb Henich didn’t show up within 15 minutes, all ten Jews would be killed.

Reb Henich immediately surrendered to the Russians, and although he promised them that the gentile’s story was a scurrilous lie, the Russians hanged him in the nearby forest. “His death shocked all of us,” Reb Yisrael recalls. Reb Henich was buried in the local cemetery, and his tizyun became a major site for davening. (See “Maleniece, My Ancestral Shtetl,” Nov. 14, 2014)

Reb Yisrael was born on 23 Elul 5663/1903 in the Polish village of Zarnow, near Lodz, but the family moved to Molnitza, a nearby village, soon after his birth because his father, Reb Moshe Dovid, z”l, was appointed “Moshke” of the Molnitza poritz (just like in the storybooks), who was responsible for the poritz’s bookkeeping.

Like most of Zarnow’s Jews, Reb Yisrael’s father was a Chassid of Reb Hillel of Radoshitz, zy”a, and would travel to his Rebbe for the Yamim Tovim and some Shabbosos.

Reb Moshe would wake up at four o’clock every morning, light the oven to heat the house, and prepare cups of tea for his seven children. He would then wake up the children and learn Chumash and Gemara with them. In those days, boys didn’t learn in cheder; instead, they learned with their fathers and a local rebbi.

Reb Yisrael’s mother, Brachah, a”h, would also wake up early to prepare breakfast — kartofel mit borsht (potato with borsht) — before they went to their melamed, Reb Yisroel Leibish. She was niftar at the age of 29.

World War I broke out when Reb Yisrael was 11. His father was captured by the Russians and kept as a prisoner until the end of the war, four years later. Reb Yisrael’s aunt housed him for the duration of his father’s imprisonment, but the young orphan had to work hard in the cow shed and chicken coop.

“I didn’t have a bar mitzvah, and even when my father returned, nobody thought about it.”

Shortly after Reb Yisrael’s father returned home he caught typhus and was niftar on Purim 5679/1919. Now doubly orphaned, the 16-year-old had to fend for himself. Since there were few job opportunities in his town, his uncle sent him to Lodz, where he was employed in a candy factory.

“It was hard physical work,” he recalls. “When I first started there, I had to carry 25-kilogram (55-pound) sacks of sugar.”

He gradually became so successful that he received a Meister certificate (master craftsman) in the art of confectionery manufacturing, with the manager revealing the secret recipe to him.

At the age of 24, Reb Yisrael married his first wife, Feige, Hy”d; they were blessed with two sons. They opened a shop below their apartment, selling homemade chocolate and ice cream. After two years, they were forced to close the shop because of the anti-Semitic mood and pogroms. (Without even seeing the proprietors, gentiles would know it was a Jewish shop because it was closed on Shabbos and Yom Tov.) Reb Yisrael returned to the candy factory, where he worked until the outbreak of World War II.

“THE HOLOCAUST MADE ME EVEN MORE RELIGIOUS”

When the Nazis overtook Lodz in 1939, harsh restrictions were imposed on the Jews. They were forced to wear a yellow star, weren’t allowed to use public transportation, and the shuls were torched. Reb Yisrael, like other Jews, was forced out of his job.

The Kristals’ German landlord, Mr. Sheller, who was not anti-Semitic and was of great help to the couple, bought candy-production machines and hundreds of kilograms of cocoa to open a factory together with them. He also looked after their valuables, because of the fear of burglaries and Nazi vandalization of Jewish homes. His job was short-lived, however: When the Lodz Ghetto was formed, the Kristals had to leave their home.

The Nazi heads of the ghetto heard about Reb Yisrael’s talent, and they ordered him to manufacture candies for the Nazi soldiers. That is how Reb Yisrael and his wife were saved, until the liquidation of the Lodz Ghetto in August 1944. Their two sons, ages ten and eight, died from malnutrition in the ghetto.

The Kristals were sent along with many Jews on a 36- hour arduous and degrading train journey in subhuman conditions to Auschwitz-Birkenau. On arrival, the men were separated from the women, and that was the last time Reb Yisrael saw his wife, Hy”d.

Everything he had was confiscated by the Nazis, but somehow Reb Yisrael was able to keep his shoes. To prevent them from being stolen, he tore the exterior of the shoes to make them look worthless.

“I wasn’t a human being — the cow was better off,” is how he describes the gehinnom he suffered. “One day’s experiences there could fill two books.”

When freed by the Russians after the Death March, Reb Yisrael was 41 years old but weighed just 34 kilograms (75 pounds).

“I never thought I would survive the War. All I thought about each day was to stay alive that day, nothing more. So I certainly didn’t dream of having grandchildren and great- grandchildren, and whenever I look at them I know that I have won.”

The atrocities he witnessed in Lodz and Auschwitz continue to haunt him. “The world hasn’t changed,” Reb Yisrael is obviously pained to say. “Now the Holocaust has moved to Syria, and the whole world is looking on, not doing a thing — exactly the same as what happened 70 years ago during the European Holocaust. All they think about is money. They are playing with people as if they were footballs, and the world just watches silently.”

When asked about emunah, Reb Yisrael declares that the Holocaust did not negatively affect his beliefs; on the contrary, it even strengthened his faith. “I became even more religious from the Holocaust,” Reb Yisrael affirms. “If I stayed alive after so much suffering, this is a real miracle because it’s supernatural.”

After the Holocaust, Reb Yisrael returned to Lodz, where he was hospitalized and ultimately was discharged on crutches. After recovering, he once again established a candy factory, and married his second wife, Batsheva Chuda, herself a survivor of the Lodz ghetto and Auschwitz, and the sole survivor in her family. But they weren’t finished with their travails: Their first child, Dovid, died after being vaccinated at the age of one month.

A year later, in 1948, they merited the birth of their son Chaim, presently a children’s doctor in Yesod Hamaaleh.

Since anti-Semitism was still strong in postwar Lodz, the Kristals decided to emigrate to Eretz Yisrael. In 1950 they landed in Haifa, and a year later their daughter Shulamit was born. Reb Yisrael once again established a confectionery store in Haifa, where he worked until his retirement.

In the 1960s, the Israeli confectionery firm Elite offered to buy his unique recipe for candies, but Reb Yisrael rejected the offer. “If I sell it, what will remain for me?” And to the present day, nobody knows his secret.

His wife Batsheva was niftar 20 years ago at age 70, after suffering a stroke.

“IT COULD BE WORSE, SO LET’S GIVE THANKS FOR WHAT WE HAVE”

Reb Yisrael starts his day at 5:30 in the morning (“There’s no point in sleeping more. I’ve slept enough in my lifetime!”) He davens by heart because of his weakened eyesight.

Reb Yisrael’s daughter, Mrs Shulamit Kuperstoch, says her father’s perspective is unique. “What has held him strong all these years is his optimism,” she says. “His view is that if times are hard, it could be worse. And when times are good — well, there is no limit to good.

“Whenever something bad happens, he always responds: ‘It could be worse, so let us give thanks for what we have.’ When such things happen, he doesn’t get angry, doesn’t calculate that life owes him better and doesn’t feel bitter. He faces the facts head-on, and he believes that every problem can be overcome.”

Reb Yisrael also has his own views on eating. “In the camps there wasn’t always something to eat. Whatever they gave me, I ate. [Today,] I eat to live; I don’t live to eat,” he explains. “A person shouldn’t constantly want more, since too much of a good thing isn’t good, like being too clever. Similarly, eating too much isn’t good. It’s better to eat a bit less than a bit more. You shouldn’t fill yourself up with food.”

When he was 109 and his pacemaker battery ran out, it took time to obtain a replacement. “They are taking their time, because they want to get rid of me,” Reb Yisrael quipped to his daughter.

“Not at all,” she replied, “they just haven’t decided if they should put in a ten-year battery, or one that lasts longer!”

What does Reb Reb Yisrael daven for? “Every morning I ask Hashem to grant me at least one more day.”

In reply to our final question — What is the secret of your longevity? — Reb Yisrael quips, “If I tell you, it will no longer be a secret!” So we’re left wondering. Is it his good sense of humor, his incredible optimism, his calmness of mind, or perhaps his keeping busy with candies and chocolates?

Reb Yisrael shakes his head, and points upward. “There aren’t any secrets. It is a present from Hashem.”

We would like to thank Rabbi Chanoch Zvi Rubinstein for his help in preparing this article.