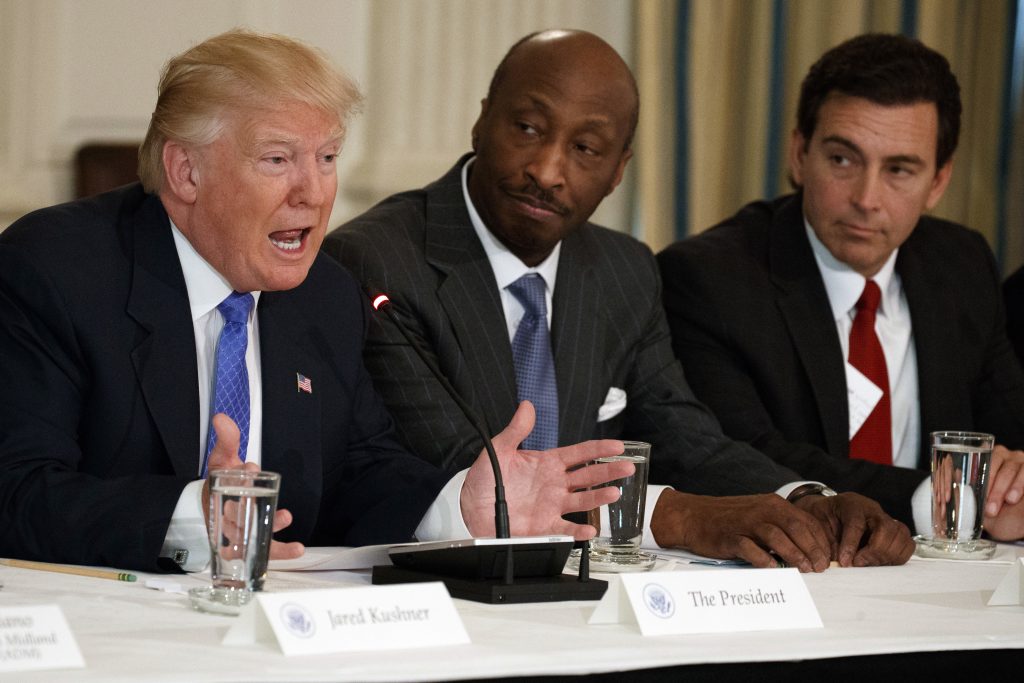 Merck’s chief executive resigned on Monday from a business panel led by President Donald Trump, citing a need for leadership countering bigotry in a strong rebuke to the president over his response to a violent white nationalist rally in Virginia.

The departure of Kenneth Frazier from the president’s American Manufacturing Council added to a storm of criticism of President Trump over his handling of Saturday’s violence in Charlottesville, in which a woman was killed when a man drove his car into a group of counter-protesters.

Frazier did not name President Trump or criticize him directly in a statement posted on the pharmaceutical company’s Twitter account, but the rebuke was implicit.

“America’s leaders must honor our fundamental values by clearly rejecting expressions of hatred, bigotry and group supremacy,” said Frazier, who is black.

President Trump immediately hit back, referring to a longstanding gripe about expensive drugs. Now that he had left the panel, Frazier would have more time to focus on lowering “ripoff” drug prices, Trump said in a Twitter post.

The outrage over Trump’s reaction to the Charlottesville violence was for comments on Saturday in which he denounced what he called “this egregious display of hatred, bigotry and violence on many sides.”

Under pressure to take an unequivocal stand against right-wing extremists who occupy a loyal segment of President Trump’s political base, the administration sought to sharpen its message on Sunday.

The White House issued a statement insisting President Trump was condemning “all forms of violence, bigotry and hatred, and of course that includes white supremacists, KKK, neo-Nazi, and all extremist groups.” Vice President Mike Pence also denounced such groups on Sunday.

President Trump’s attorney general, Jeff Sessions, tried to defend the president over his reaction, appearing on a series of morning talk shows on Monday.

Asked about the president’s words and lack of direct condemnation of white nationalist groups, Sessions defended Trump’s statement and said he expected him to address the incident again later on Monday.

Trump was scheduled to meet with Sessions and FBI Director Christopher Wray on Monday morning to discuss the Charlottesville incident, the White House said in a statement.