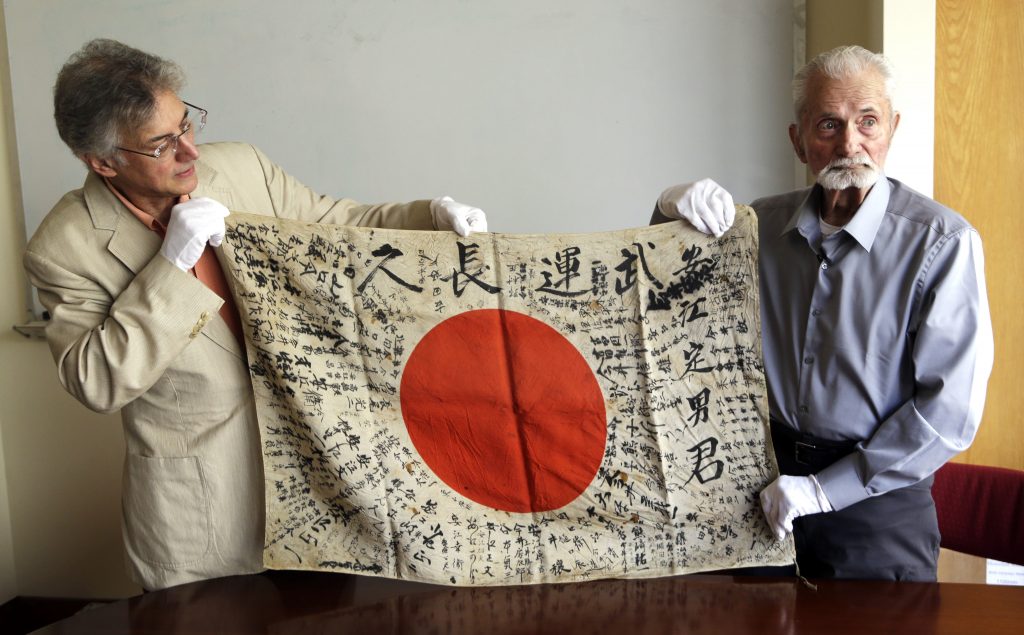 Marvin Strombo was behind Japanese enemy lines on a Pacific island during World War II when he realized the other five men in his squadron had moved on without him.

The young U.S. Marine, part of an elite scout-sniper platoon fighting a 1944 battle on Saipan, nervously scanned the terrain. He spotted a body on the ground, a dead Japanese soldier lying on his left side. The young man looked peaceful, as if asleep, and something white poked out from his jacket.

Strombo knelt and pulled out a silk flag, all the space around the bright red emperor’s sun filled with elegant calligraphy. He hesitated, then took the flag and scrambled to reunite with his squadron as they entered the Japanese-held town of Garapan.

More than 70 years later, Strombo is returning the Japanese flag to his fallen enemy’s family. The 93-year-old arrives Friday in Tokyo, the first stop in a 10,000-mile journey into the remote mountainside to bring the keepsake back to the man’s home village — back to a brother and two sisters who could never say goodbye.

“I realized there were no bullets or shrapnel wounds, so I knew he was killed by the blast of a mortar,” Strombo recalled in Portland, Oregon, this week before boarding a flight to Japan.

Then, quietly: “I think that soldier wanted me to find him for some reason.”

The flags were a good-luck charm that linked Japanese soldiers to their loved ones and their call for duty. Some were signed by hundreds of classmates, neighbors and relatives.

Allied troops frequently took them from the bodies of their enemies as souvenirs. They have a deep significance, because most Japanese families never learned how their loved ones died and never received remains.

For Strombo, the flag hung in a glass-fronted gun cabinet in his home in Montana for years, a topic of conversation for visitors and a curiosity for his four children. He never spoke about his role in the battles of Saipan, Tarawa and Tinian, which chipped away at Japan’s control of islands in the Pacific and paved the way for U.S. victory.

He wrote letters to find out more about the flag but eventually put it aside. He knew no Japanese and, in an era before the internet, making any headway was difficult.

Then, in 2012, the son of his former commanding officer contacted him about a book he was writing on the platoon.

Through him, Strombo reached out to the Obon Society, a nonprofit in Oregon that helps U.S. veterans and their descendants return Japanese flags to the families of fallen soldiers.

Within a week, by reading the script on the flag, researchers found it belonged to Yasue Sadao. They traced the corporal to a tea-growing village of about 2,400 people in the mountains roughly 200 miles west of Tokyo.

The calligraphy turned out to be the signatures of 180 friends and neighbors who saw Yasue off to war in Higashi Shirakawa, including 42 of his relatives. Seven of the original signatories are still alive, including Yasue’s 89-year-old brother and two sisters.

When researchers contacted Yasue’s brother by phone, he asked if the person who had his brother’s flag was the same one who found it so many years ago, said Rex Ziak, who co-founded the Obon Society with his Japanese wife, Keiko.

“There was just silence on the line and then he asked, ‘Do you imagine he knows how my brother died and where he died?'” Ziak recounted. “And that’s when we realized that this person is very much alive in that family and this mystery of what happened to him is very much alive.”

Strombo is the only person who can provide those answers. He can show roughly where he found Yasue’s body on the outskirts of Garapan and can tell the siblings that their brother likely died of a concussion from a mortar round.

“I knew he was young because I could see his profile as I bent over him. He was lying on his back, kind of on his left side,” he said.

The Obon Society has returned about 125 flags and gets about five inquiries a day from aging soldiers who regret their actions and want to return the flags before they die.

The group believes thousands of similar flags are likely hidden in attics across the U.S. that could give answers to countless other families. Strombo will be the first World War II veteran to return a flag in person to a Japanese family through the Obon Society.

The trip is a journey of forgiveness and closure as he finishes the final chapter of his life.

Only two other men in his platoon of 40 are still alive, and he knows the humid islands where he fought for weeks are now a footnote in the war’s larger history.

“It got so I kind of wanted to meet the family, you know,” he said, his voice growing raspy. “I know it means so much to them.”