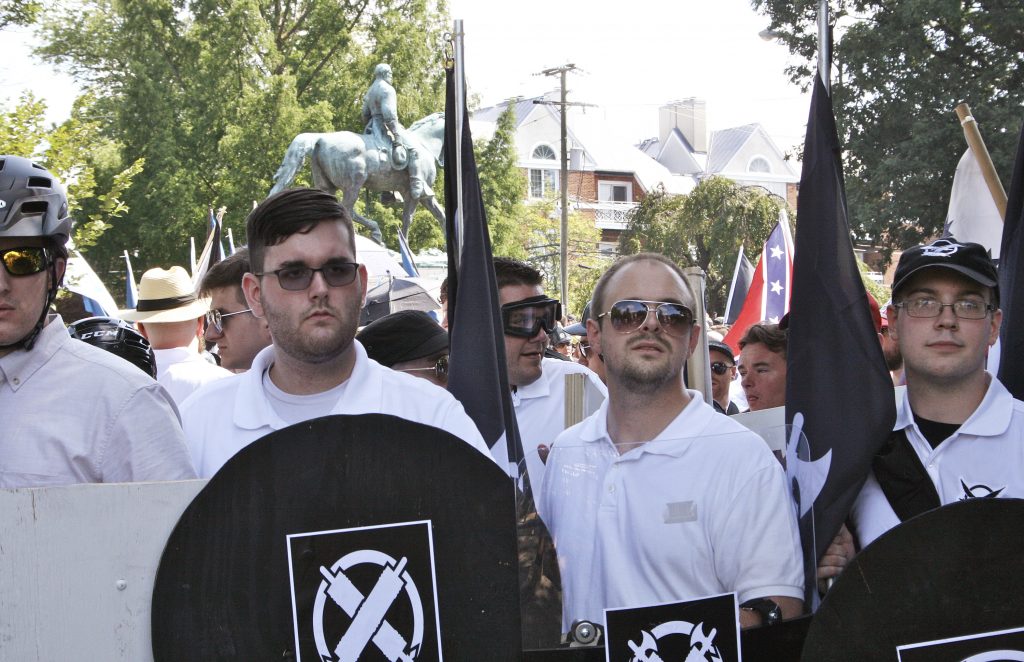 James Alex Fields Jr., 20, of Ohio, who is accused of plowing a car into a crowd in Charlottesville Saturday, espoused Nazi ideals in high school, according to Derek Weimer, a high-school history teacher. One person was killed and 19 injured.

Weimer said that he taught Fields during his junior and senior years at Randall K. Cooper High School in Kentucky. During a class called “America’s Modern Wars,” Weimer said that Fields wrote a deeply researched paper about the Nazi military during World War II.

“It was obvious that he had this fascination with Nazism and a big idolatry of Adolf Hitler,” Weimer said. “He had white supremacist views. He really believed in that stuff.”

Weimer said that Fields’s research project into the Nazi military was well-written but appeared to be a “big lovefest for the German military and the Waffen SS.”

Weimer said that as a teacher he unsuccessfully attempted to steer Fields away from his Nazi infatuation by using historical examples and facts.

“When you’re a teacher and you see one of your former students do this, it’s a nightmare scenario,” Weimer said. “This was something that was growing in him. I admit I failed. I tried my best. But this is definitely a teachable moment and something we need to be vigilant about because this stuff is tearing up our country.”

Video recorded at the scene of the crash shows the 2010 Dodge Challenger accelerating into crowds on a pedestrian mall, sending bodies flying – and then reversing at high speed, hitting yet more people. Witnesses said the street was filled with people opposed to the white nationalists, who had come to town bearing Confederate flags and anti-Semitic epithets.

Fields was arrested and charged with one count of second-degree murder, three counts of malicious wounding, and one count of hit-and-run attended failure to stop with injury, police said. He is being held without bail and is scheduled to be arraigned Monday, Albemarle-Charlottesville Regional Jail Superintendent Martin Kumer said.

Brian Moran, Virginia secretary of public safety, said this of Fields: “He was a terrorist to do what he did.”

The FBI field office in Richmond and the U.S. Attorney’s Office in the Western District of Virginia said late Saturday that they have opened a civil rights investigation into the deadly car crash.

“The violence and deaths in Charlottesville strike at the heart of American law and justice,” U.S. Attorney General Jeff Sessions said in a statement. “When such actions arise from racial bigotry and hatred, they betray our core values and cannot be tolerated.”

Records show he last lived in Maumee, Ohio, about 15 miles southwest of Toledo.

Fields’ father was killed by a drunk driver a few months before the boy’s birth, according to an uncle who spoke on the condition of anonymity. His father left him money that the uncle kept in a trust until Fields reached adulthood.

“When he turned 18, he demanded his money, and that was the last I had any contact with him,” the uncle said.

Fields, he said, grew up mostly in Northern Kentucky, where he’d been raised by a single mother who was a paraplegic. The uncle, who saw Fields mostly at family gatherings, described his nephew as “not really friendly, more subdued.”

Richard Spencer, a leader in the white supremacist movement who coined the term “alt-right,” said he didn’t know Fields but had been told he was a member of Vanguard America, which bills itself as the “Face of American Fascism.” In a statement tweeted Saturday night, the group denied any connection to Fields.

In several images that circulated online, he was photographed with the group while wearing its unofficial uniform. Like members, he was dressed in a white polo, baggy khakis and sunglasses, while holding a black shield that features a common Vanguard symbol.

“The shields seen do not denote membership, nor does the white shirt,” the group said in its statement. “The shields were freely handed out to anyone in attendance.”

Vanguard members did not respond to requests for comment Sunday.