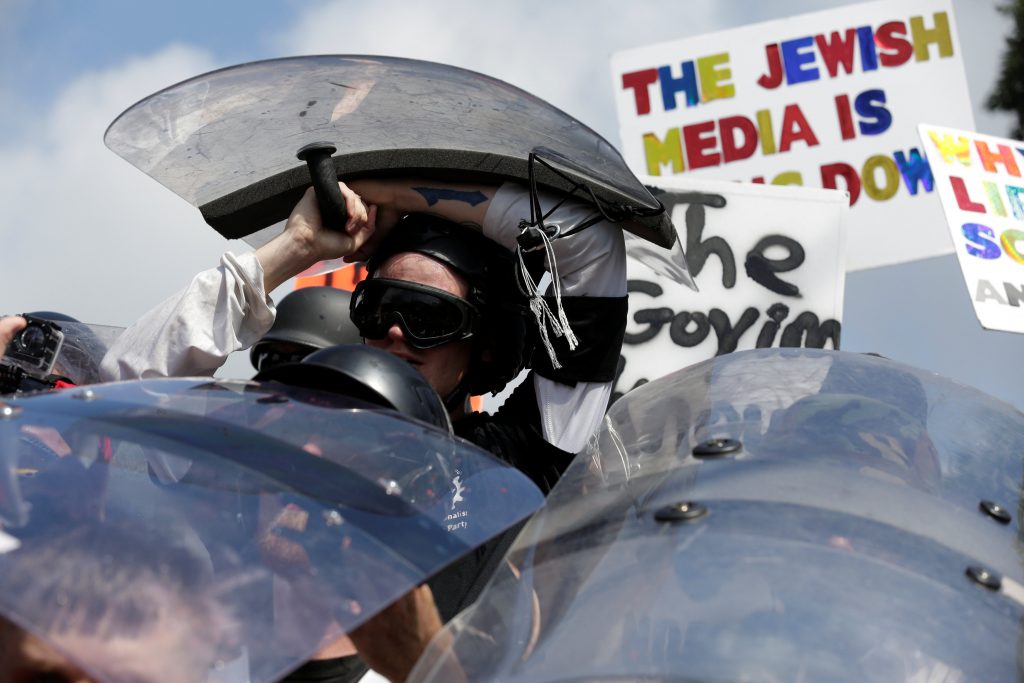 Hate in America has manifested itself troublingly this past weekend in a quiet Virginia town. The death of a young woman protesting a white supremacist rally is another in a long list of incidents harking back to 2014 that depict a country under racial fire.

The emergence of the American neo-Nazi after seven decades is a bloodcurdling symptom of a clash of two cultures which are rising to seize control. The so-called “Unite the Right” mob evoked the medieval torches and pitchfork riot which preceded pogroms, pillage and plunder. They do not have anyone behind them, united or otherwise. All they have united is the nation against them.

Begone, you purveyors of hate. Take back your disgusting wares and slogans to the 18th century from whence it came. America is no place for you. The right provides no residence for a party as wrong as you. The chants of “blutt un ehr,” blood and honor — chillingly echoed along Charlottesville’s streets Friday night — were buried already in the crags of Nuremburg.

So what does this mean to us as a nation? Does a second civil war beckon on the horizon? Are there fears that the imposing statues of Confederate generals on horseback will slip off their steeds and take command of a new resurrection?

First, the major Charlottesville “rally” which was sold by the media as the “largest group of white nationalists to come together in a decade,” in the words of The Associated Press, is unfortunately a media manufacture. While hundreds of people — ugly human beings including neo-Nazis, those longing for a return to a white America, and a consortium of socialist groups — were there, it scarcely represents the true America which hums with love and acceptance for all.

Secondly, the hate is not confined to one side or a single ideology. On the opposite side of the Charlottesville divide was its own hodgepodge of violent groups, including Black Lives Matter. The killing by car actually came at the tail end of hours of violence between the sides, with dozens of injuries on both margins.

In truth, hate in America has been waxing and waning ever since John Smith planted his feet on the shores of the Jamestown colony 130 miles away from the location of the Saturday incident and established the fledgling conservative principle that “he that will not work shall not eat.” The same fervent battles over immigration and welfare which roil their descendants’ society today played out in color on that 17th-century stage.

The loathing continued through the Pilgrims’ attempts at puritanizing their Plymouth Bay adventure, bulldozed across the Revolutionary War era, and embedded itself deep in American culture as the colonists set about bringing forth a nation conceived in liberty, and dedicated to the proposition that all men are created equal.

The revulsion for the other, and Jews have most often been represented as the other, has lain dormant for the past half century as liberalism raised its flag.

We stand today as a country united as never before, notwithstanding the occasional burps recalling the nation’s tiny but teeming underground of hate.

The reemergence of the “alt-right,” personified by this past weekend’s horror, must be condemned by all sides, not just the right. The media’s reignition of the “Trump is an alt-right” meme, which died of sheer boredom earlier this year, is a repulsive, if sadly predictable, commentary of our press corps. So is Gov. Andrew Cuomo’s inexplicable petition on the state-funded website to target the president.

Hate in America is a tiny flame, as it has been since the 1950s, but Saturday’s incident shows it to still be alive. Both sides have a responsibility to tamp down the hate, sideline the extremists, and not use hate for political gain.

‘Tis our one country, there’s no other.