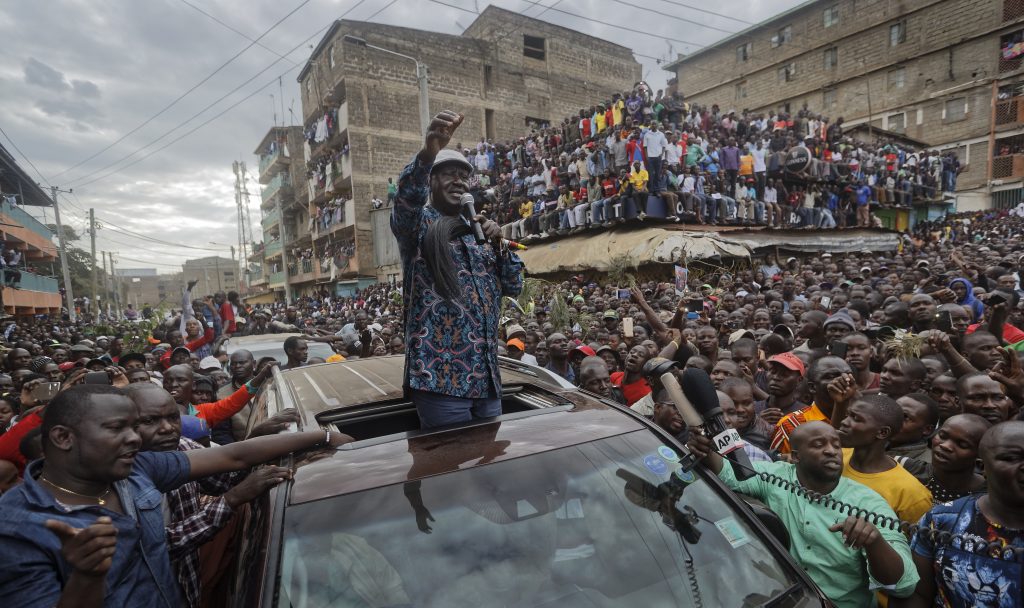 At least 24 people have been shot by police in violence during Kenya’s disputed election, according to Kenyan human-rights observers, including many killed in protests in opposition strongholds after President Uhuru Kenyatta’s victory late Friday.

The Kenya Red Cross Society said it picked up 93 injured casualties in the violence. MSF Kenya, which has its own ambulances and involves figures not counted by the Red Cross, reported 54 people were treated at its clinics, raising the toll to at least 150 wounded.

On Saturday, police fired live bullets and tear gas on protesters in volatile areas of Nairobi and other parts of the country, provoking anger from opposition supporters and condemnation from human-rights activists.

Kenya faced its third successive disputed election after the opposition National Super Alliance claimed its candidate, Raila Odinga, won and that Kenyatta had colluded with the Independent Electoral and Boundaries Commission to steal the election.

Kenya has a vibrant capital, a burgeoning tech sector, and a robust middle class, but it also faces frequent terrorist attacks, is embroiled in war against the Qaida-allied Al Shabab in neighboring Somalia, and loses around $6 billion a year to corruption, almost a third of its GDP.

Every five years during bitterly contested elections, voters divide largely along ethnic lines over who will gain power, which is often used to hand out jobs and patronage to ethnic allies. In 2007 election violence flared across Kenya, leaving an estimated 1,500 dead, as rival ethnic groups dragged people from their houses and killed them over a disputed result.

Kenya’s massive deployment of riot police in opposition strongholds appears designed to prevent the nation from sliding into a similar conflict. But rights observers said police have used excessive force to quell demonstrations. The Kenyan National Human Rights Commission said 17 of the 24 killed since the Aug. 8 election died in the capital, Nairobi.

In the opposition heartland, loyal supporters look to the party leaders to determine their response to the result. Although the party has called for calm and urged supporters not to put their lives in danger, leaders have also made reference to Kenyans rising up to defend democracy.

The dead include at least eight men killed by gunshots from Nairobi’s Mathare slum after Friday night’s election result. They were taken to the city morgue, an official told the Los Angeles Times.

Reuters reported that a small girl was killed in Mathare as police fired shots. Dozens more were wounded, including children. Some cases of looting were reported.

At a news conference, Kenya’s opposition National Super Alliance, or NASA, said at least 100 Kenyans had been shot by police, and produced handfuls of bullets used against protesters.

“These are the bullets that the government is using to kill innocent Kenyans,” said Johnstone Muthama at a news conference Saturday. “Over 100 innocent people have been killed. Police have put them in body bags and disposed of them. We will not be calm. We will not relent.”

Their claims did not match those of witnesses or rights groups, and they produced no evidence of where and when the deaths occurred. NASA leaders continue to rule out court action, the legal avenue for election disputes in Kenya.

A convoy of opposition leaders and lawmakers tried to visit the Kibera slum where protests were unfolding Saturday, but were denied access by police.

In preliminary reports, independent international observers have found no systematic efforts to manipulate the election voting. The IEBC said there had been an attempt to hack its computer system, which failed.

A local observer group, Elections Observation Group, reported Saturday it had observed results at 1,692 of the more than 40,000 polling stations and found its result reflected the official IEBC tally, but said it was premature to call the election free and fair.

“There are no demonstrations. They are looters, and looters are criminals who ought to be arrested,” he said.

But Kenya National Human Rights Commission Chairwoman Kagwiria Mbogori rejected his claim, and said the use of live ammunition was “totally unacceptable.” She called on police to stop using live ammunition against civilians.

“The police should not use tear gas or live ammunition simply because they consider a gathering unlawful,” said Otsieno Namwaya of Human Rights Watch.

Kenya has a history of political violence and forced disappearances, torture and executions by security forces. In the first 10 months of last year, 122 people were killed by security forces, according to Amnesty International. It also used lethal force to disperse demonstrations last year.

Bernard Owino, 34, a barber and opposition supporter living in Kibera, saw police shoot a man and hit and kick a woman. He said another two people were shot and injured by police who entered their houses. He fled when the shooting started but later picked up four spent bullets. He said the protesters were not armed.

“You can’t face live bullets with an empty hand,” he said.

“I don’t like it at all. I don’t know why the government is bringing so many police to Kibera. They have just come and they are provoking people.”

Constantine Lunyama, another Kibera resident, was about 200 yards away when police started shooting live ammunition.

“It came from the police side. We have seen some guys taken to the mortuary and some guys rushed to the hospital,” he said.

Christopher Angwenyi, a peace activist in the Mathare slum district, said he saw three bodies with gunshot wounds Saturday, including two women. He saw a dozen people in a local clinic who told him they had been hit on the head by police.

Odinga urged his supporters to skip work on Monday to protest the election. The government urged Kenyans to return to their jobs.

Odinga spoke on Sunday to a cheering crowd in Nairobi’s Kibera slum, an opposition stronghold and a frequent scene of clashes since the election.

“There is no work until Tuesday, when we will announce the next step,” said Odinga.