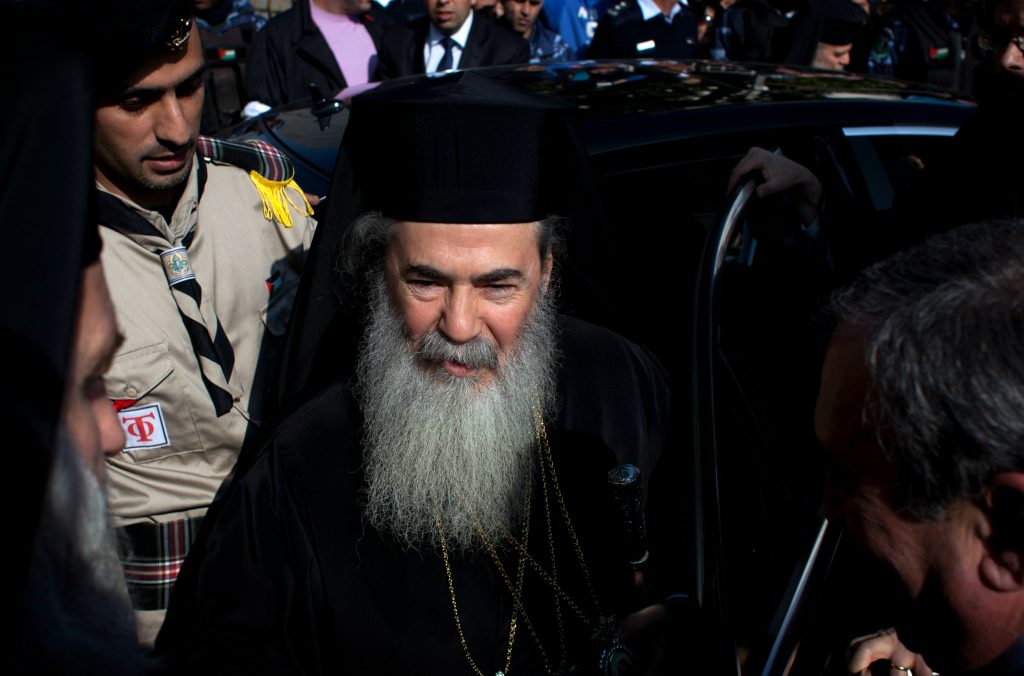 The Greek Orthodox patriarch in the Holy Land announced Saturday that his church will appeal an Israeli court decision that approved the sale of prime church property to companies representing Jews seeking to expand their presence in Yerushalayim’s Old City.

The church had challenged the property deal in court for the past decade, arguing it was conducted illegally by the since-deposed previous patriarch and was therefore invalid.

The Yerushalayim District Court upheld the deal two weeks ago, paving the way for three large properties near the Old City’s Jaffa Gate to be leased for 99 years to Ateret Cohanim, a group that has been buying properties for Jews in traditionally Arab areas of Yerushalayim.

Patriarch Theophilos III alleged Saturday that the lower court ruling was “politically motivated” and said the church would appeal to Israel’s Supreme Court.

The church will do “everything within its power so that this unjust ruling will be overturned,” he said at a news conference in the Jordanian capital of Amman.

Theophilos leads a predominantly Arab flock of 220,000 Christians in Jordan, Israel and the Palestinian territories.

The Greek Orthodox church is one of the largest property owners in the Holy Land, including in Yerushalayim’s Old City, one of the most sensitive areas of the Israeli-Palestinian conflict.

Israel’s current government rejects any partition of Yerushalayim as part of a possible peace deal. Since 1967, some 200,000 Jews have settled in east Yerushalayim neighborhoods built for them by successive Israeli governments, making partition increasingly difficult. In addition, Jewish settler groups have bought homes in Arab neighborhoods.

The patriarch also expressed concern about what he said was an effort by some members of Israel’s parliament to restrict the rights of his church and other Christian denominations in the Holy Land to deal independently with their real estate holdings.

He urged the heads of churches to find a joint response to “this alarming and serious development” that he said will affect Christians in the region and around the world.

“We cannot stress too highly the extreme seriousness of the situation,” Theophilos said. He called on world leaders to intervene.

In recent years, there have been growing tensions between the predominantly Greek church leadership and the Arab flock, including over the administration of the vast property holdings and land leases to Israel in west Yerushalayim.

Critics have repeatedly demanded that the church provide details about its holdings.

On Saturday, church officials declined to answer when asked about the holdings.