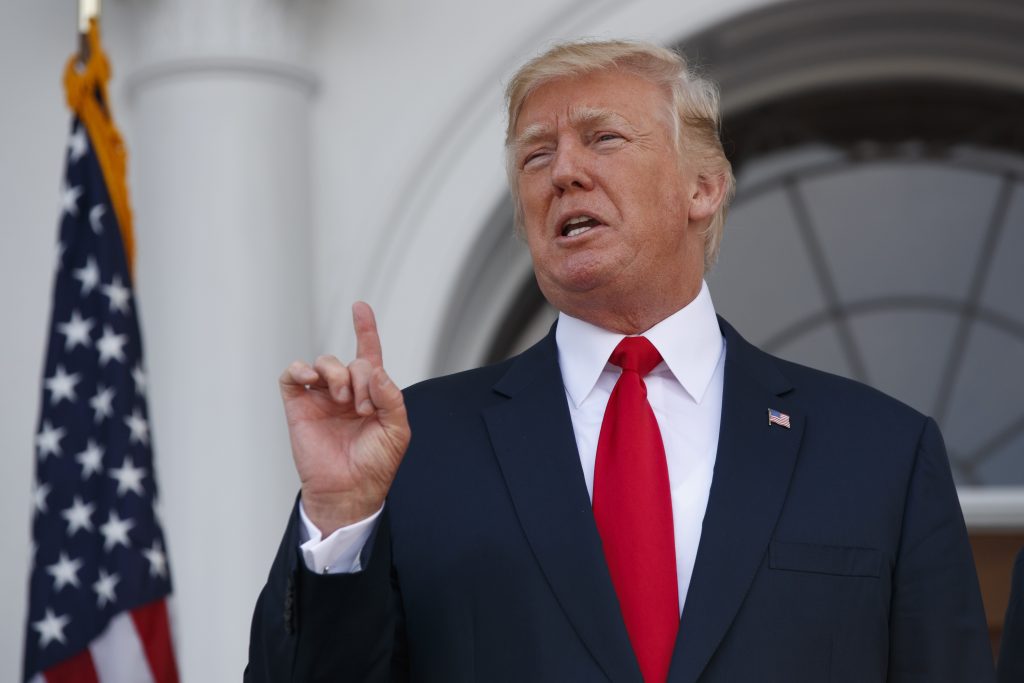 President Donald Trump raised the possibility Thursday that Majority Leader Mitch McConnell should step down if he can’t muscle health care and other legislation through the Senate, taking an extraordinary swipe at the man with the most power to steer the White House agenda through the chamber.

In remarks to reporters outside his golf resort, Mr. Trump escalated his attacks on the Kentucky Republican over last month’s collapse in the Senate of GOP legislation repealing and rewriting much of President Barack Obama’s health care overhaul.

Trump’s criticism gave voice to a view harbored by many hard-right conservatives about the 33-year Senate veteran, who they consider far too willing to give ground.

It’s highly unusual for a president to publicly suggest leadership changes in Congress.

It also seems unlikely that Trump’s sentiments would seriously threaten McConnell’s job. He is strongly respected by nearly all GOP senators, who concede that with a slender 52-48 majority, it would have been difficult for anyone to steer the health care measure through the Senate.

“I don’t think any of us in the Senate blame Mitch for how this came down,” said Sen. Jeff Flake (R-Ariz.), a McConnell ally. Citing the narrow GOP margin and the need for cooperation between the White House and Congress, Flake added, “I don’t think that there will be any realistic push to push Mitch out.”

Late last month, the chamber rejected three plans pushed by McConnell to replace Obama’s law. The final one was defeated 51-49 after three Republicans joined all Democrats in voting no — one more than McConnell could afford to lose.

“They lost by one vote,” Mr. Trump said. “For a thing like that to happen is a disgrace. And frankly, it shouldn’t have happened.”

Mr. Trump’s comments came after he used Twitter three times over the past two days to taunt McConnell over the health care crash, expressing disbelief that McConnell couldn’t persuade a GOP majority to pass a bill.

Hours later, he used Twitter to target McConnell again, even as much of Washington was more focused on the ratcheting up of nuclear tensions between the U.S. and North Korea. This time, Mr. Trump nudged McConnell to plunge into a range of issues, though Congress is on recess until after Labor Day.

“Mitch, get back to work and put Repeal & Replace, Tax Reform & Cuts and a great Infrastructure Bill on my desk for signing. You can do it!” Trump wrote.

The president bristled this week after McConnell told an audience in his home state of Kentucky that Mr. Trump had “not been in this line of work before” and had “excessive expectations about how quickly things happen in the democratic process.” Both before and after taking office, Mr. Trump spoke often about passing the health care overhaul quickly.

Asked to respond to Trump’s statement, McConnell spokesman David Popp said, “The leader has spoken repeatedly about the path forward regarding Obamacare repeal and replace on the Senate floor, at media availabilities and in Kentucky.”

McConnell spelled out his view of the path forward in his Monday remarks to the Rotary Club in Florence, Kentucky.

“If people can show me 50 votes for anything that would make progress on that, I’ll turn back to it. But in the absence of that, we’re going to be moving on. We have a number of things to do in September,” he said.

McConnell cited must-pass bills that would prevent a government shutdown and a federal default, plus a GOP desire to turn to tax cuts.

But he also kept the door open for a narrower health care effort aimed at stabilizing individual health insurance marketplaces around the country.

“I think no action is probably not going to work, because you’ve got a lot of private health insurance markets imploding,” McConnell said. “So exactly what form that takes is unclear right now.”

A small handful of online exchanges created by Obama’s law may have no insurers offering coverage next year, but many may have just one company selling policies. Many insurers around the country are proposing to raise premiums, often citing worries that the Trump administration will take steps to undermine the markets, such as halting federal subsidies they receive to lower costs for millions of people.

In Mr. Trump’s shot at McConnell on Wednesday, he wrote on Twitter, “Senator Mitch McConnell said I had ‘excessive expectations,’ but I don’t think so. After 7 years of hearing Repeal & Replace, why not done?”