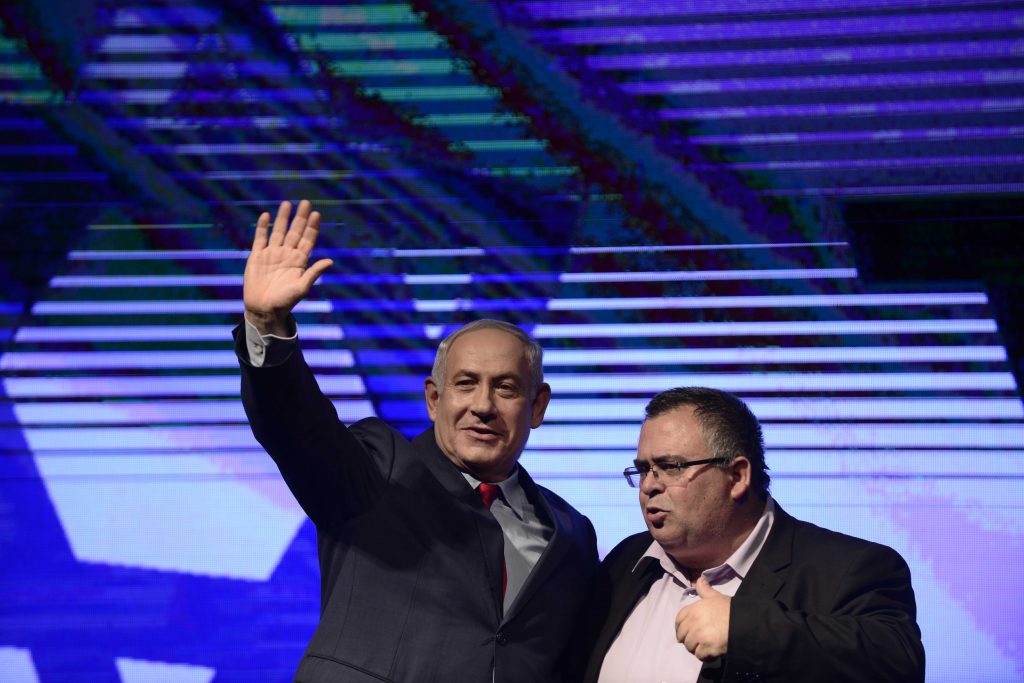 Likud officials were “very satisfied” with Wednesday night’s show of support for Prime Minister Binyamin Netanyahu. Likud MK David Bitan, one of the prime movers behind the event, told Kol Beramah radio Thursday that the rally provided a much-needed boost for the right, which is the biggest victim of the unprecedented media campaign to unseat Netanyahu.

“The rally brought us back to the days of Begin, when there was raw, basic admiration for the leader of the Likud,” Bitan said. “The rally had two purposes: First, to remove rumors that the Likud is split over the continuation of Netanyahu as leader of the party, and second, to provide succor for the prime minister in the wake of what he is going through.”

The rally started as a spontaneous idea over the weekend, Likud sources told Channel 10, and for an event that was organized in about two days, the turnout of several thousand Likud loyalists “was very good,” the sources said. “Likud members admire Netanyahu,” Bitan said in the interview. “Supporting our leaders is part of the DNA of the Likud, even if they make mistakes. This is why we do not often change the leaders, as they do in other parties. Besides that, Netanyahu is an excellent prime minister.”

Wednesday’s rally came in the wake of Netanyahu’s former chief of staff Ari Harow signing a deal to turn state’s evidence. Harow is expected to give testimony in the coming days in one or both of two investigations by police against Netanyahu: Case 1000, in which Netanyahu was accused of accepting extravagant gifts from millionaire Arnon Milchin, and Case 2000, in which the prime minister allegedly leaned on the publishers of Yisrael Hayom to limit distribution of their free newspaper in order to benefit from better coverage in rival newspaper Yediot Acharonot. The signing of such a deal is usually an indication that solid testimony is being offered, and reports over the weekend said that Harow would provide police with evidence of influence peddling by Netanyahu.

Netanyahu himself spoke at the event, in a last-minute decision to appear at the rally. “A few days ago, a Likud member told me, ‘Bibi, they [the media] are trying to bring you down, but it’s not just you, it’s all of us — the Likud, and the national camp. They know they can’t beat us at the polls, so they try to evade the peoples’ democratic decision without elections. I tell them that this will not happen.”

“The public is not stupid,” Bitan said in the interview Thursday. “The media is trying to use the investigations against Netanyahu as a way to replace him, and the left has been trying to do this for a long time. According to the media’s agenda, Netanyahu has been prime minister too long, we need to replace him. Whether he is being investigated is irrelevant as far as these issues are concerned.”