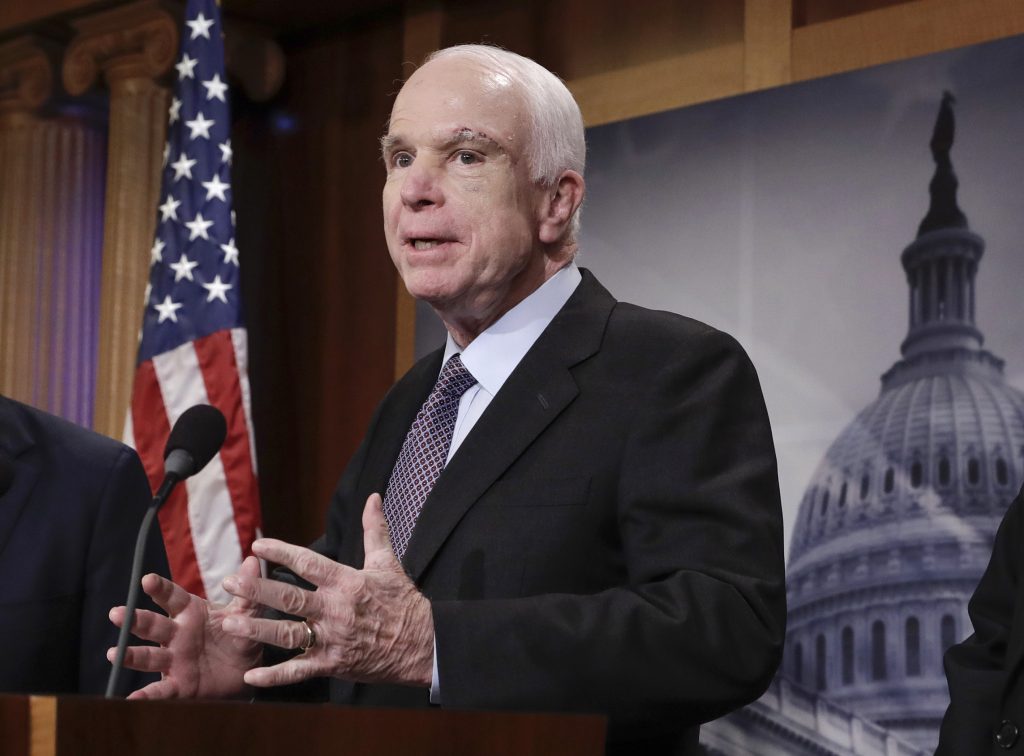 In a rebuke of President Donald Trump, Sen. John McCain declared Thursday that “America is adrift in Afghanistan” as he promoted a war strategy that would expand the U.S. counterterrorism effort and provide greater support to Afghan security forces.

McCain, chairman of the Senate Armed Services Committee, said the U.S. needs to put strict conditions on continued assistance to Afghanistan, and require the Kabul government to demonstrate “measurable progress” in curbing corruption, strengthening the rule of law, and improving the financial transparency.

“Nearly seven months into President Trump’s administration, we’ve had no strategy at all as conditions on the ground have steadily worsened,” said McCain, a leading voice in Congress on national security matters. “But we must face facts: We are losing in Afghanistan and time is of the essence if we intend to turn the tide.”

McCain, R-Ariz., said he’ll seek a vote on his “strategy for success” in Afghanistan when the Senate returns in September and takes up the annual defense policy bill.

His plan calls for sending in more U.S. combat forces, although he doesn’t say how many. But McCain wants them to be less constrained in carrying out missions against the Taliban, al-Qaida, a growing Islamic State affiliate and other extremists.

The plan, McCain said, is to “deny, disrupt, degrade and destroy the ability of terrorist groups to conduct attacks against the United States, its allies, or its core interests.”

Frustrated by his options, Trump has withheld approval of a long-delayed strategy as he searches for a plan that will end the stalemate and allow U.S. forces to pull out of America’s longest war. It’s been nearly 16 years since the United States invaded the then Taliban-ruled country in response to the al-Qaida attacks of Sept. 11, 2001.

The United States has about 8,400 troops in Afghanistan. Trump has so far resisted the Pentagon’s recommendations to send almost 4,000 more to expand training of Afghan military forces and bolster U.S. counterterrorism operations. The deployment has been held up amid broader strategy questions, including how to engage regional powers in an effort to stabilize Afghanistan.

These powers include U.S. friends and foes, from Pakistan and India to China, Russia and Iran. Pentagon plans aren’t calling for a radical departure from the limited approach endorsed by former President Barack Obama, and several officials have credited Trump with rightly asking tough questions, such as how the prescribed approach might lead to success.

McCain, however, has grown increasingly impatient. During a committee hearing in June, he told Defense Secretary Jim Mattis that he had been confident the administration would deliver a plan for Afghanistan within a month or two after taking office.

Mattis said he understood the urgency and acknowledged, “We are not winning in Afghanistan right now.”

The amendment he plans to propose adding to the defense policy bill calls for a “long-term, open-ended” U.S.–Afghanistan partnership that includes an “enduring U.S. counterterrorism presence.”

He also recommends expanding U.S. training assistance to the Afghan security forces so they can capably fight the Taliban and other militant groups. McCain proposes longer-term support that will allow the Afghans to develop and expand their own intelligence, logistics, special forces and airlift operations.

McCain’s approach envisions better harnessing U.S. military and civil strengths in pursuit of a negotiated peace process that leads to Afghan political reconciliation and eventual diplomatic resolution to the war.

He also proposes to punish neighboring Pakistan with graduated diplomatic, military and economic costs “as long as it continues to provide support and sanctuary to terrorist and insurgent groups, including the Taliban and the Haqqani network.”

Among the Taliban’s factions, the strongest is the Haqqani network, which has deep ties to Pakistan and its intelligence agency. The relationship dates to the 1980s Afghan war against the Soviet Union, which had sent in more than 100,000 soldiers to support the pro-communist Afghan government.