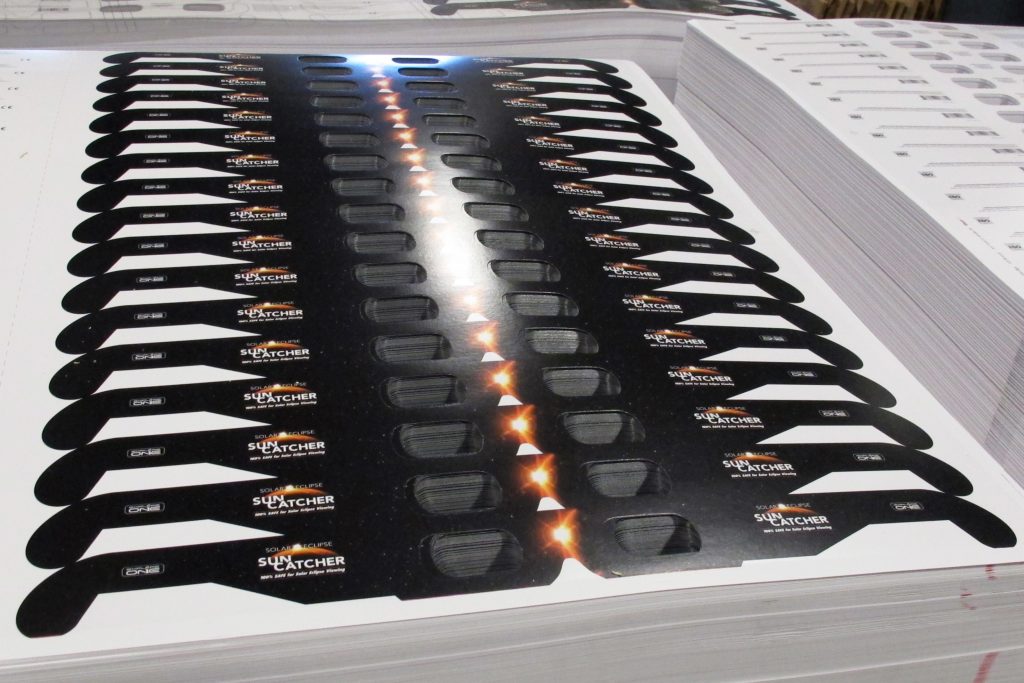 With the total solar eclipse right around the cosmic corner, eye doctors are going into nagging overdrive.

They say mom was right: You can damage your eyes staring at the sun, even the slimmest sliver of it.

So it’s time to rustle up special eclipse eyewear to use Aug. 21, when the U.S. has its first full solar eclipse spanning coast to coast in 99 years.

“We have an opportunity to experience a spectacular natural phenomenon, and we can enjoy it with some simple protection. But if you don’t use that protection, you’ll be paying for it for the rest of your life,” says Dr. Paul Sternberg, director of the Vanderbilt Eye Institute in Nashville, smack dab in the middle of the total eclipse path.

No peeking, for example, without eclipse glasses or other certified filters except during the two minutes or so when the moon completely blots out the sun, called totality. That’s the only time it’s safe to view the eclipse without protection. When totality is ending, then it’s time to put them back on.

To be clear, totality means 100 percent of the sun is covered. That will occur only along a narrow strip stretching from Oregon, through the Midwestern plains, down to South Carolina. The rest of the U.S. gets a partial eclipse that extends into Canada and to the top of South America.

So it’s important to know exactly where you are on eclipse day in relation to that path of totality, advises Dr. B. Ralph Chou, a retired professor of optometry at the University of Waterloo in Ontario who is also an astronomer and eclipse chaser. He’ll be in Oregon for his 19th total solar eclipse.

“Unfortunately, when it comes to safety with a solar eclipse, 99.9 percent coverage means a 0.1 percent area of the sun that is still uncovered and is every bit as dangerous,” Chou said.

For example, Boise, Idaho, will see 99 percent sun coverage; Omaha, Nebraska, 98 percent; Savannah, Georgia, 97 percent; and Memphis, Tennessee, 94 percent. So for those cities — and anywhere else with a partial eclipse — you need to keep those solar specs on the whole time.

What can happen when you look directly at the sun? You’re essentially cooking your retina, the delicate, light-sensitive tissue deep inside the eyeball. Solar radiation can kill those cells. Hours can pass before you realize the extent of the damage.

It’s known in the trade as solar blindness or solar retinopathy — not total blindness, rather more like age-related macular degeneration, where you have trouble reading or recognizing faces, or lose those abilities altogether.

Seconds are enough for retinal sunburn. And unlike with the skin, you can’t feel it. The damage can be temporary or permanent.

“It’s really important to resist the urge to look even momentarily, directly in the sun because you have no real sense of time,” says Dr. Christopher Quinn, president of the American Optometric Association. “What you think may be a glancing look could be a more substantial amount of time, and that can result in permanent damage.”

Forget sunglasses. Certified eclipse glasses or hand-held viewers are a must for direct viewing. Or you can look indirectly with a pinhole projector — homemade will do, crafted from a shoebox, or grab a kitchen colander — that casts images of the eclipsed sun onto a screen at least 3 feet away.

When it comes to eyewear, though, the emphasis is on certified.

Worried about potentially dangerous knockoffs, NASA, the American Astronomical Society and others are urging eclipse watchers to stick with reputable makers of sun-gazing devices. The society’s solar eclipse task force has put out a list of approved manufacturers, available at https://eclipse.aas.org/resources/solar-filters

Don’t use eclipse glasses with filters that are crumpled, scratched or torn. If you can see any light besides the sun, it’s time for new solar specs. Also, beware if the eclipse glasses are older than 2015, when international safety standards were adopted.

Eclipse glasses can be worn directly over your prescription glasses or with contacts. As for binoculars, telescopes and cameras, high-quality solar filters are essential and must be mounted at the front end.

Chou collected and studied 20 reports of temporary eye injuries following a 1979 total solar eclipse that included Canada. Males under age 20 were found to be particularly susceptible; they tended to ignore safety warnings, he said.

In 1999, British doctors reported 70 cases of temporary eye damage following a full solar eclipse. Most cases involved no or inadequate eye protection and many were from spots with a partial eclipse, just shy of a full one.

Chou stresses that outside the path of totality, where there’s only a partial eclipse, “it’s never safe to take the filters off.”

This Associated Press series was produced in partnership with the Howard Hughes Medical Institute’s Department of Science Education. The AP is solely responsible for all content.