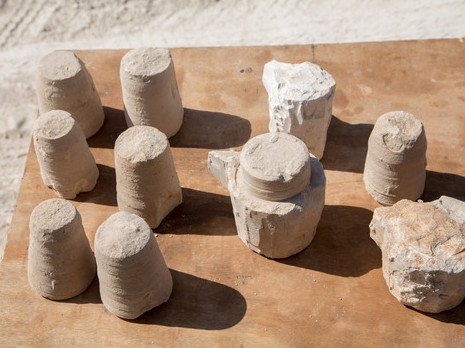 A rare workshop for the production of chalkstone vessels that archeologists believe dates to the period of Bayis Sheini was recently unearthed at Reina, in the Lower Galil.

The excavations took place in a small cave in which researchers found thousands of chalkstone cores and other types of production waste, including fragments of stone mugs and bowls in various stages of production, the Israel Antiquities Authority said Thursday.

The ancient site is the fourth workshop of its kind to ever have been discovered in Israel. It was uncovered during the course of construction work at a municipal sports center conducted by the Reina Local Council.

According to Dr. Yonatan Adler, senior lecturer at Ariel University and director of the excavation on behalf of the IAA, during that period, Jews throughout Yehudah and Galil used tableware and storage vessels made of soft, local chalkstone.

“The choice of material reflects the strong adherence to halachah of ancient Jewish communities, as according to ritual law, vessels made of pottery are easily made impure and must be broken,” explained Adler on Thursday. “Stone, on the other hand, was a material which can never become ritually impure, and as a result, ancient Jews began to produce some of their everyday tableware from stone.”
Although chalkstone vessels have been unearthed at many Jewish sites throughout the country, Adler said it is extremely unusual to uncover a site where such vessels were actually produced.

The excavations also revealed an artificial tunnel where workers quarried the raw material for the chalkstone vessels.

“Ancient chisel marks cover the walls, ceiling and floor of the cave,” Adler said.
“Inside the cave and on the ground nearby are strewn thousands of stone cores, the ancient industrial waste from stone mugs, and bowls produced on a lathe. Hundreds of unfinished vessels were also found, apparently damaged during the production process and discarded on-site.”

While similar finds have been recorded in other parts of the country, Yardenna Alexandre, an archaeologist at the Authority specializing in the study of the Galil during Bais Sheni, described the discovery in the Galil as an unprecedented opportunity.

“Throughout the years, we have been discovering fragments of these kinds of stone vessels alongside pottery in excavations of houses in both rural and urban Jewish sites from this period, such as Kafr Kanna, Sepphoris and Nazaret,” said Alexandre.

“Now, for the first time, we have an unprecedented opportunity to investigate a site where these vessels were actually produced in the Galil.”