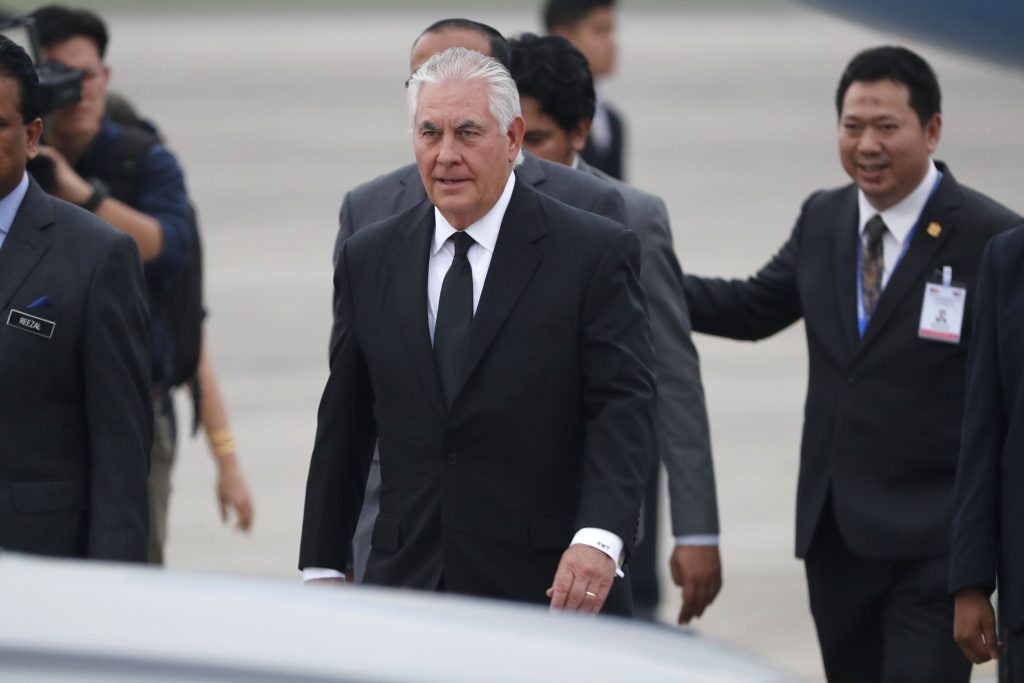 President Donald Trump declared the U.S. nuclear arsenal “far stronger and more powerful than ever before,” even as his top diplomat was working to calm the North Korea crisis and insisting there wasn’t “any imminent threat.”

In a series of early-morning tweets Wednesday, Trump reaffirmed his threat from a day earlier by reposting a video of him warning that Pyongyang would be “met with fire and fury like the world has never seen” if it made more threats to the U.S. Then he said that his first order as president had been to “renovate and modernize” the U.S. nuclear arsenal.

“Hopefully we will never have to use this power, but there will never be a time that we are not the most powerful nation in the world!” Trump tweeted.

It wasn’t immediately clear what evidence the president had, if any, to support his claim about the nuclear force.

Trump did issue an executive order in his first days in office calling for a review to ensure the U.S. nuclear deterrent is “modern, robust, flexible, resilient, ready” and appropriately tailored for 21st century threats. The White House has not detailed any findings from that evaluation. A modernization effort started by former President Barack Obama is in the early stages, but the force is essentially unchanged from the way Trump inherited it on Jan. 20.

Only hours before Trump’s tweets, Secretary of State Rex Tillerson urged calm and said Americans should have “no concerns” despite the exchange of threats between the president and North Korea. Aboard his plane as he flew home from Asia, Tillerson insisted the developments didn’t suggest the U.S. was moving closer to a military option to dealing with the crisis.

“Americans should sleep well at night,” Tillerson said. He added: “Nothing that I have seen and nothing that I know of would indicate that the situation has dramatically changed in the last 24 hours.”

The mixed messages from Tillerson and Trump put the onus on the North Koreans to decide how to interpret the latest missives from the U.S.

In more tranquil terms than Trump, Tillerson sought to explain the thinking behind Trump’s warning. He said the president was trying to send a strong and clear message to North Korea’s leader so that there wouldn’t be “any miscalculation.”

“What the president is doing is sending a strong message to North Korea in language that Kim Jong Un can understand, because he doesn’t seem to understand diplomatic language,” Tillerson said. “I think the president just wanted to be clear to the North Korean regime on the U.S. unquestionable ability to defend itself.” He said the U.S. “will defend itself and its allies.”

The comments put Tillerson once again in the role of translating the president’s aggressive rhetoric into more diplomatic terms, and of working to minimize the chances of public panic. In fact, Tillerson argued that North Korea’s escalating threats indicated it was feeling the pressure from a successful U.S. strategy.

Tillerson spoke to reporters as he returned from Malaysia to Washington, stopping along the way in Guam. Hours earlier, North Korea’s army had said in a statement it was exploring plans for attacking the tiny U.S. territory, which houses U.S. military bases and is a common refueling stop for U.S. government aircraft traversing the Pacific Ocean.

Tillerson said he never considered re-routing his trip from Malaysia so as to avoid stopping in Guam. Though he insisted there was no imminent threat, he noted that even if there were, “the North Korean missile capability can point in many directions, so Guam is not the only place that would be under threat.”

Though it’s extremely unlikely the North would risk annihilation by pre-emptively attacking American citizens, the escalating rhetoric has heightened concern that a miscalculation could spiral out of control and lead to military conflict — a concern especially acute in Guam, residents of the territory said.

At least one prominent lawmaker felt Trump wasn’t bluffing with his threat. Sen. Lindsey Graham, a Republican on the Armed Services Committee, told CBS’ “This Morning” that Trump had “basically drawn a red line” by saying Pyongyang can’t ever have a nuclear-tipped intercontinental ballistic missile capable of striking the U.S.

Tillerson, who spent the past days in Asia working the North Korea conflict, said he didn’t believe a new diplomatic strategy was needed. To the contrary, he said the latest threat from the North suggested the current strategy was working. After months of frustration over China’s reluctance to pressure Pyongyang economically, the U.S. on Saturday secured a unanimous U.N. Security Council vote to authorize sweeping new sanctions that target one-third of the North’s exports.

“The pressure is starting to show,” Tillerson said. “I think that’s why the rhetoric coming out of Pyongyang is beginning to become louder and more threatening. Whether we’ve got them backed into a corner or not is difficult to say, but diplomatically, you never like to have someone in a corner without a way for them to get out.”

To that end, Tillerson said there was still an off-ramp available to Pyongyang: A return to negotiations with the U.S., a step that Tillerson has previously said can happen only if Kim Jong Un’s government gives up its nuclear aspirations, starting with an extended pause in missile tests.

“Talks,” Tillerson said when asked if North Korea had a way out. “Talks, with the right expectation of what those talks will be about.”