What We Know About North Korea’s Quest for Nuclear Weapons 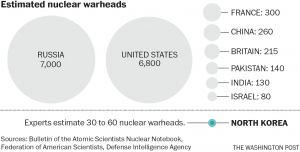 Over recent weeks, many Americans have had a rude awakening: North Korea has nuclear weapons. And worse still, it may soon be able to launch a missile that could use one of these nuclear weapons on the United States.

It’s a frightening situation, made worse by the fiery rhetoric coming out of both Washington and Pyongyang. But the crisis over nuclear weapons didn’t come out of nowhere. Here’s a guide to North Korea’s long-standing quest to acquire nuclear weapons.

Where does North Korea’s nuclear weapons program stands at the moment?

North Korea first tested a nuclear weapon in 2006 and it has conducted four further tests since then. The most recent test, conducted last September, featured an estimated 20- to 30-kiloton detonation. The blast it produced was up to twice that of the bomb dropped on Hiroshima, Japan in 1945.

A recent U.S. intelligence estimate first reported on by The Washington Post suggested that the country may have up to 60 nuclear weapons, including some that are miniaturized – meaning it may be possible to fit them on a missile. North Korea has been testing intercontinental ballistic missiles at the same time, including one referred to as the “Hwasong-14” that analysts believe could theoretically reach the U.S. mainland.

There remain a number of big questions about the reliability of such missiles and other practical issues such as its ability to “reenter” the earth’s atmosphere intact. But many experts say that Pyongyang has now crossed a major threshold in its weapons program and may theoretically now pose a threat to mainland U.S.

North Korea’s attempts to acquire a nuclear weapon go back as far as the 1960s, when North Korean leader Kim Il Sung asked the Soviet Union, Pyongyang’s most important ally at the time and already a major nuclear power, for help with its nuclear program. Kim was rebuffed and Moscow privately pushed North Korea to join the nuclear Non-Proliferation Treaty (NPT), an international agreement designed to limit the spread of nuclear weapons (it did so in 1985).

In the 1990s, however, tension grew over North Korea’s weapons program, with U.S. officials saying that the country was covertly continuing with its weapons program and with disagreements over International Atomic Energy Agency (IAEA) inspections of weapons sites. Over a series of years, a number of agreements broke down; in 2003 North Korea claimed it had pulled out of the NPT.

Under the leadership of Kim Jong Il, Kim Il Sung’s son who ruled from 1994 to 2011, North Korea’s nuclear program grew relatively slowly. However, since Kim Jong Un took over in 2011, the country has diverted considerable resources to the program, making a number of major advances in both its nuclear weapons and missiles programs.

North Korea’s initial drive to have nuclear weapons wasn’t unusual in the Cold War-era. Many other nations, including South Korea, were seeking nuclear weapons around that time. North Korean leader Kim Il Sung also feared that the U.S. and South Korea were gearing up to wage a war to unite the Korean Peninsula.

But while many other countries celebrated the end of the Cold War, for North Korea’s ruling regime it presented an existential threat. The Soviet Union, its most important geopolitical ally, had collapsed and was being replaced by a weaker, pro-Western Russia. In anticipation of its upcoming isolation, Pyongyang began investing in its nuclear program, hiring former Soviet engineers who could teach North Koreans. The nuclear program, even in its infancy, gave North Korea an international clout far bigger than its stagnating economy and diplomatic isolation would normally afford.

In the later years, the utility of nuclear weapons became more and more obvious. The Kim family saw how foreign governments that abandoned their weapons program for international acceptance were later overthrown with Western backing. In 2011, North Korea’s state news agency said that Libya’s Moammar Gadhafi should have kept his weapons and that “the Libyan crisis is teaching the international community a grave lesson.”

Many analysts now say that Kim views nuclear weapons as a deterrence to a foreign military intervention or regime change. Others argue, however, that the eventual aim for Pyongyang is to reunite the Korean Peninsula under North Korean rule, as it tried with a 1950 invasion.

Why can’t the U.S. or another country take out North Korea’s weapons program with a military strike?

North Korean state media has repeatedly suggested that it would view the smallest military provocation as an act of war. If that is correct, the results could be disastrous. Putting aside nuclear weapons for a moment, there’s little doubt that a fully fledged war against North Korea would result in an enormous loss of human life.

Seoul is just 30 miles from the Korean Demilitarized Zone (DMZ). The South Korean capital, with its population of around 25 million, is within easy reach of North Korea’s artillery guns. If North Korea decided to use these weapons, they could cause huge damage in a short amount of time. One study from 2012 estimated that 64,000 people could be killed by this artillery in the first day, but other estimates are far higher. Destroying this artillery would be tricky and time-consuming.

Even if the U.S. and its allies were able to quickly take out the Pyongyang’s military command, it is likely that the damage caused to the country and the ensuing collapse of the North Korean state would create an enormous humanitarian crisis. Because of this, the U.S. and its allies have largely avoided targeted strikes against North Korean weapons out of fear of prompting a bigger war.

What other policies are there?

The United Nations placed sanctions on North Korea after its 2006 nuclear test. The United States has also imposed its own sanctions on Pyongyang, as have the European Union, South Korea and Japan. The most recent U.N. sanctions against North Korea are particularly wide-ranging and aim to cut off a third of North Korea’s estimated $3 billion annual revenue from exports.

The extent to which sanctions can compel North Korea to give up or halt their nuclear program is widely debated. There is also considerable doubt about whether countries such as China and Russia are willing to fully implement U.N. sanctions, dimming their effectiveness considerably. Some argue that even if these sanctions hurt North Korea overall, Kim Jong Un is still determined to keep the nuclear program going and will divert resources from other areas.

For many, ultimate hope with both sanctions and threats of military action is to bring Pyongyang to the negotiating table. The new South Korean president, Moon Jae-in, proposed new talks last month. While few think North Korea would completely give up its weapons program, it may be convinced to limit or halt it. But critics of talks say that North Korea has flouted agreements before – most notably after the 1994 nuclear deal brokered under President Bill Clinton – and that Pyongyang has only used talks to gain temporary concessions.

Would Kim Jong Un use his nuclear weapons?

The brutality of the North Korean regime is notorious. The United Nations says that Kim Jong Un presides over a vast network of political prisons based on the Soviet Union’s infamous “Gulag” system. Credible reports suggest that the regime may have executed its own high-ranking officials with antiaircraft weapons.

But there is little sign that Kim is suicidal. The North Korean regime is likely well-aware that it could not survive a nuclear war with the U.S. – it is outmatched in terms of both nuclear and conventional weapons. Instead, North Korea’s weapons seem to be a bargaining chip.

The U.S. government is well are of this. Despite his tough words this week, President Donald Trump has also voiced his support for sanctions and talks. But with rhetoric heating up, a miscalculation by either side remains an alarming possibility. At this moment, there is little immediate sign of tensions decreasing.