Residents of the U.S. territory Guam say they’re afraid after being caught in the middle of rising tensions between President Donald Trump and North Korea, but Gov. Eddie Calvo reassured his constituents that there is no threat to the island.

“An attack or threat to Guam is a threat or attack on the United States,” said Calvo, who said he spoke with White House officials Monday morning. “They have said that America will be defended.” 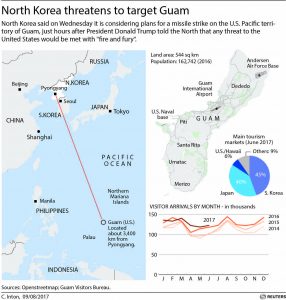 Guam is about 2,100 miles southeast of Pyongyang and 3,800 miles west of Honolulu in the Pacific Ocean. For years, North Korea has claimed Guam is within its missiles’ striking distance, making furious statements each time the U.S. flew powerful bombers from the island’s air base to the Korean Peninsula.

In August last year, the North’s Foreign Ministry warned that all U.S. military bases in the Pacific including Guam would “face ruin in the face of all-out and substantial attack” by the North’s military. In the spring of 2013, state media cited leader Kim Jong Un as having ordered his military to prepare plans for launching strikes on U.S. military bases in Guam, Hawaii and South Korea as well as the American mainland.

Guam is armed with the U.S. Army’s defense system known as Terminal High Altitude Area Defense, or THAAD, which can intercept missiles.

Similar threats in 2013 led Guam’s U.S. Congresswoman Madeleine Z. Bordallo to advocate for the THAAD system, she said in a statement Wednesday.

“North Korea’s most recent threat to target Guam is dangerous and it further heightens tensions in our region,” Bordallo said. “While we have heard threats like this in the past, I take them very seriously.”

Though local officials downplayed any threat, people who live and work on the island, which serves as a launching pad for the U.S. military, said Wednesday they could no longer shrug off the idea of being a potential target.

“I’m a little worried, a little panicked. Is this really going to happen?” said Cecil Chugrad, a 37-year-old bus driver for a tour bus company in Guam. “If it’s just me, I don’t mind, but I have to worry about my son. I feel like moving [out of Guam] now.”

A travel agent on Guam said they haven’t had a surge of customers seeking to book flights off the island.

“It’s not bad at all, no chaos,” said Mariah Sablan, who works for Golden Dragon Travel Inc. “It’s just like a regular business day.”