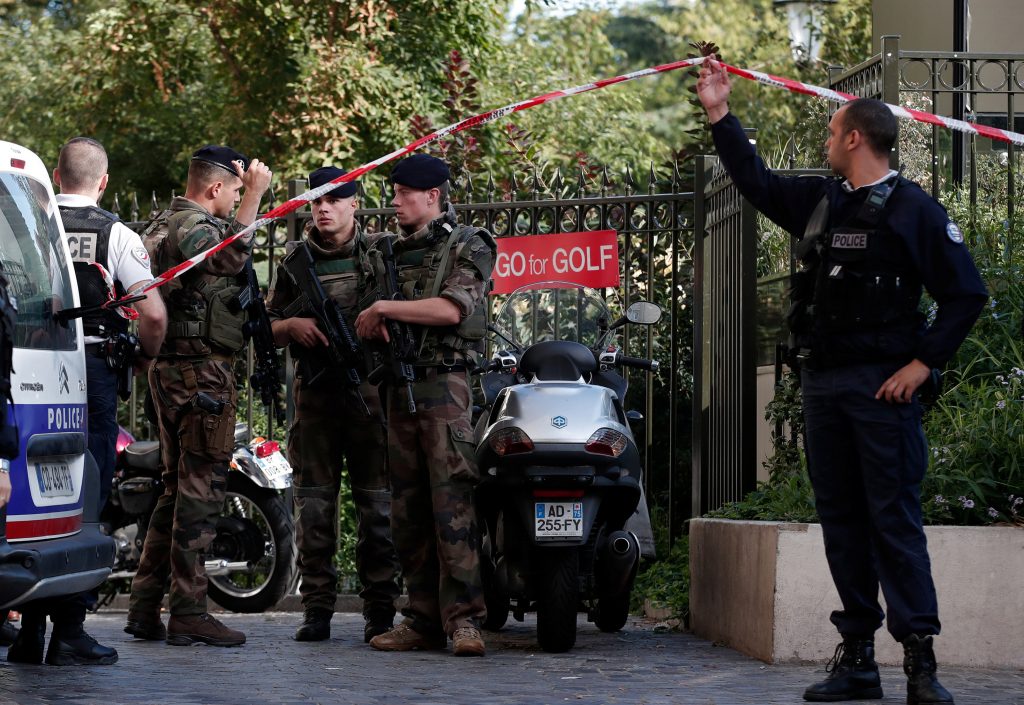 A car rammed into a group of soldiers in a Parisian suburb on Wednesday, injuring six before speeding off and sparking a manhunt that a judicial source said ended with the suspect’s arrest on a motorway.

In an attack that authorities said bore the stamp of terrorism, the driver appeared to have lain in wait for the soldiers in a pedestrian zone near their base in Levallois-Perret.

The affluent suburb on the northwestern edge of Paris is home to France’s domestic counter-terrorism agency. Several dozen troops from Operation Sentinel, launched in the wake of Islamist attacks in Paris in early 2015, are based there.

The car accelerated into the troops, who were starting their patrol, when they were a few meters away, Interior Minister Gerard Collomb told reporters outside the hospital where the three more seriously injured victims were being treated.

“This was a deliberate act, not an accident,” Collomb said, adding that counter-terrorism investigators had taken up the case.

A judicial source said the unarmed suspect was arrested on a motorway in northern France. A Reuters witness saw a bullet-riddled BMW at the scene.

One policeman was injured by a stray bullet in the operation.

The Levallois-Perret attack was the 15th on soldiers and police since they were deployed in large numbers nationwide after a series of Islamist militant attacks over the past two-and-a-half years.

Armed Forces Minister Florence Parly said Wednesday’s attack was proof there remained an active threat and that the 7,000-strong Sentinel force “was more necessary than ever.”

Three soldiers had light injuries, Parly said, while three others were more gravely hurt but not as seriously as previously thought.

Patrick Balkany, mayor of Levallois-Perret, called it a “disgusting” act of aggression that was “without any doubt” premeditated.

Jean-Claude Veillant, resident of an apartment building directly above the scene, witnessed part of the attack.

“I heard a loud noise, the sound of scraping metal. Shortly after, I saw one of the badly wounded lying in front of the Vigipirate (army patrol) vehicle and another one behind it receiving treatment,” he told reporters.

Islamist terrorists have killed more than 230 people on French soil since January 2015, including one attack on Paris and another on the Riviera city of Nice.

Operation Sentinel has put heavily armed combat troops in public view as they patrol key sites in military fatigues, at an annual cost running into hundreds of millions of euros.

While it did not prevent the November 2015 attack when terrorists killed 130 people in Parisian cafes and a hall, Sentinel troops have disarmed or killed would-be attackers on several occasions since – including a February incident where a machete-wielding assailant attacked soldiers outside the Louvre art museum, and another on Saturday at the Eiffel tower.

This year, terrorists attacked soldiers at the Louvre museum site in Paris in February and at Orly airport in March. An assailant shot a policeman dead on the Champs Elysees avenue in the capital in April.

Levallois-Perret is about 5 km (3 miles) from city center landmarks such as the Eiffel Tower and the Elysee Presidential Palace.