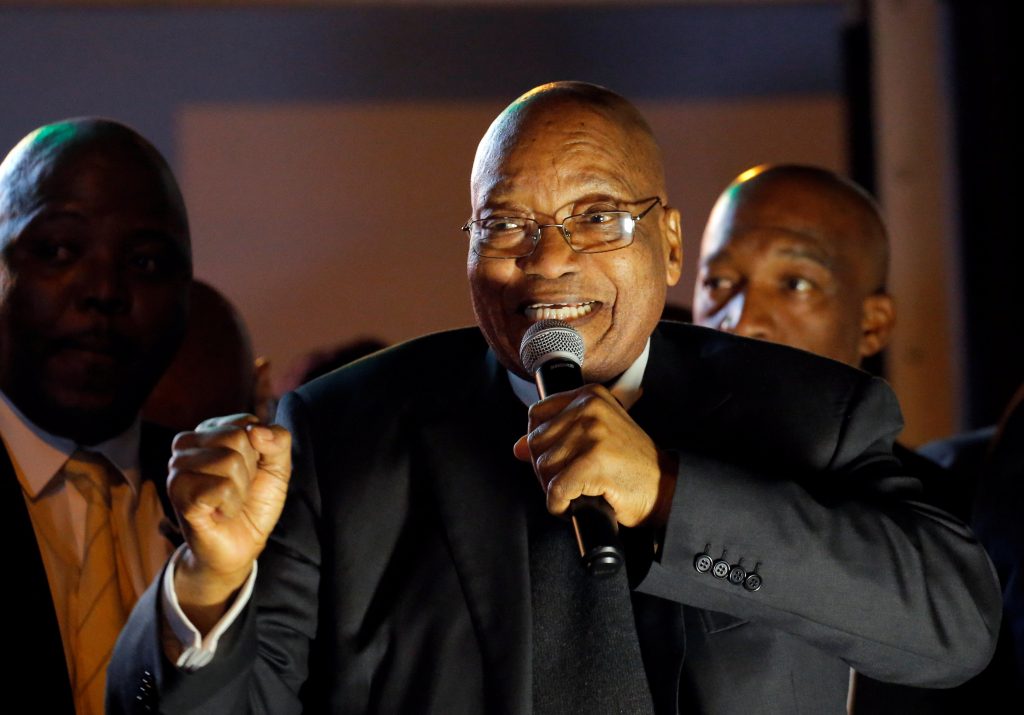 South African President Jacob Zuma survived a no-confidence motion in parliament, ensuring that he’ll maintain his grip on power until at least the end of the year. The rand weakened.

The motion was defeated by 198 votes to 177, National Assembly Speaker Baleka Mbete announced at a sitting in Cape Town. Nine of the 384 lawmakers present in the chamber, where the African National Congress has a 62 percent majority, abstained. More than two dozen ruling party members voted against Zuma.

The defeat of the motion could backfire on the ANC as it prepares to contest elections in 2019 with Zuma’s public approval rating running at an all-time low. Opposition parties could point to the fact that the ANC had an ideal opportunity to remove Zuma and take a stand against corruption but didn’t use it, according to Dirk Kotze, a politics professor at the University of South Africa.

“The failed motion of no confidence reinforces the status quo,” Kotze said by phone from Pretoria, the capital. “The current political crisis in the ANC will just deepen. It’s a lose-lose situation for them at this point.”

The outcome of the vote weighed on the markets, with the rand slumping as much as 1.3 percent against the dollar after the vote outcome was announced. The currency was at 13.3948 per dollar at 7:09 p.m. in Johannesburg.

Zuma’s tenure has been marred by a succession of scandals and policy missteps that have weighed on investor confidence and sent the economy into recession. He’s clung to power thanks to the support of most of the ANC’s top leaders, many of whom rely on him for their Cabinet posts and government jobs. He’s due to step down as ANC leader in December and as president in 2019.

South Africa’s top court ruled last year that Zuma broke his oath of office when he refused to repay taxpayer funds spent on his private home. A report by the Public Protector in November said that Zuma and some ministers may have breached the government’s code of ethics in their relationship with the Gupta family, who are in business with Zuma’s son. Zuma and the Guptas deny wrongdoing.

Senior party officials, including Deputy President Cyril Ramaphosa, have spoken out against deepening corruption and the undue influence of private business interests over government institutions, known as “state capture.”

“That our own MPs voted for the motion worries us,” the ANC’s chief whip in parliament, Jackson Mthembu, said in an interview after the vote. “It means we must deal with a lot of internal issues including the allegations of state capture and corruption.”

The opposition filed its latest motion of no-confidence in April after Zuma fired Pravin Gordhan as finance minister, a move that prompted two ratings companies to downgrade the nation’s debt to junk and sparked massive public protests.

Thousands of protesters marched through the streets of Cape Town to demand Zuma’s removal, and security personnel sealed off streets and erected barricades around the parliamentary complex. Anti-Zuma demonstrations also took place in Johannesburg and Pretoria.

Several thousand pro-Zuma supporters staged their own demonstration outside Parliament and cheered after the vote outcome was announced.

“This vote means political stability for the country,” Joan Fubbs, an ANC lawmaker, said in an interview. “There is an ANC elective conference due in December and the party will make a free choice without all these distractions.”

The ANC led the fight against apartheid rule and has governed Africa’s most-industrialized economy since it took power in the nation’s first multi-racial elections in 1994.

Disgruntlement with Zuma’s leadership contributed to the party’s worst-ever electoral performance in a municipal vote in August last year, and several of its senior leaders have warned that it’s in danger of losing its overall majority in 2019 elections.

“This win will be the continuation of a weakened and precarious form of power for him because overall it remains a serious embarrassment,” said Susan Booysen, a political science professor at the University of the Witwatersrand’s School of Governance. “It is a situation that has put a massive amount of stress on the ANC itself.”