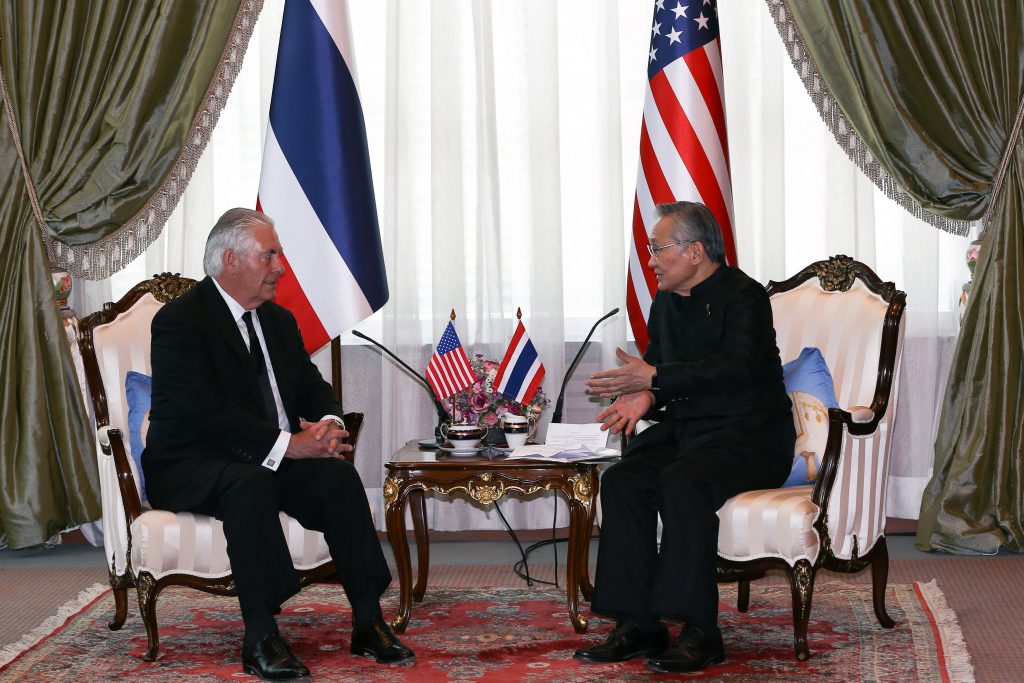 Secretary of State Rex Tillerson on Tuesday pressed Thai leaders for more action on North Korea during the highest level visit to Thailand by a U.S. official since a military coup in 2014 soured relations with the United States.

Secretary Tillerson’s top priority has been urging Southeast Asian countries to do more to cut funding streams for North Korea.

The United States believes North Korean front companies are active in Thailand and is trying to encourage the Thais to shut them down, Assistant Secretary for East Asian and Pacific Affairs Susan Thornton told reporters aboard Secretary Tillerson’s plane.

The companies are using Bangkok as a regional hub and change their names frequently, she said.

Before meeting Secretary Tillerson, Prime Minister Prayuth Chan-ocha said Thailand would support a U.N. resolution on new sanctions on Pyongyang over its missile tests. But he made no mention of specific action.

The United States was encouraging Thailand to take as many North Korean refugees as it can handle, Thornton said. Reuters reported exclusively last week that the number of North Koreans slipping illegally into Thailand has surged in recent months.

Thailand’s own politics and human rights record were also in focus, as Washington strengthens relations with its oldest ally in the region after they were downgraded following the coup.

“We want Thailand to emerge as a strengthened democracy that respects and guarantees human rights and fundamental freedoms at home and plays a leading role in advancing regional security and prosperity,” a U.S. embassy spokesman said.

Secretary Tillerson offered no specific message on human rights when he spoke to the American community at the ambassador’s residence and highlighted the 200-year-old relationship.

“We want to continue to grow that relationship, even in its ups and downs,” he said.

President Donald Trump has spoken to PM Prayuth by telephone and invited him to the White House, but no date has been set yet.

Human rights groups have voiced concern about the re-establishment of normal relations while Thailand’s junta continues to crack down on critics.

“It would be a practical mistake for Tillerson to not condition positive diplomatic relations on improvements in the protection of human rights,” Matthew Smith, of the Fortify Rights group, told Reuters.

Thailand’s military seized power in May 2014 after months of street protests with a promise to eventually restore democracy, but elections will not happen before next year and a new constitution retains a powerful political say for the army.

Since the coup, Thailand has aligned itself more closely with Beijing, and this year approved purchases of more than $500 million worth of Chinese submarines, tanks and helicopters, besides construction of a new rail link.

Another source of friction is Thailand’s trade surplus over the United States. It was the 11th largest last year, at nearly $19 billion, although Thai officials expect a sharp rise in U.S. imports to reduce it.

During his five-hour visit to Bangkok, Secretary Tillerson signed a condolence book for the revered late King Bhumibol Adulyadej, whose death after seven decades on the throne was felt deeply in Thailand.

Secretary Tillerson’s visit follows his attendance at a regional security forum in Manila at the weekend.