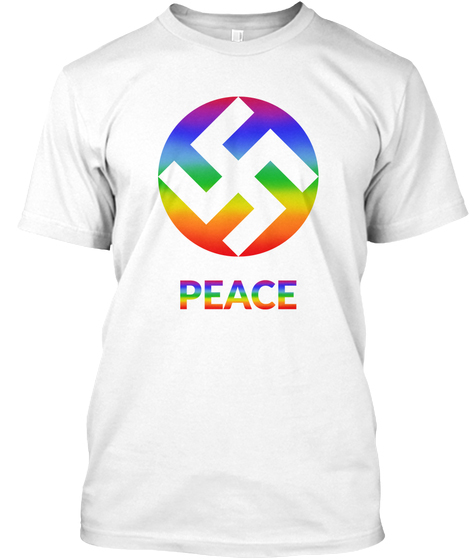 A design studio that tried to “reclaim” the swastika by selling shirts emblazoned with rainbow versions of the Nazi symbol has pulled its products after weeks of backlash, including from a national anti-Semitism group.

KA Design first pushed out its idea for “The New Swastika” in a July 12 social media video that reviewed the swastika’s long history.

For thousands of years, the video noted, the swastika had been used in numerous cultures to symbolize peace, love, luck, infinity and life.

“but one day Nazism,” text in the video noted, in one of the clip’s many capitalization-challenged semi-non sequiturs. “they stigmatized the Swastika forever. they won / they limited our freedom / or maybe not? the Swastika is coming back. . . . introducing the new Swastika.”

The video then showed an array of swastikas set against a rainbow background and the words “PEACE,” and”LOVE.”

Soon, the social media video was flooded with comments.

Some thought it must have been a joke, while others were outraged, blasting the campaign as “disgusting” and “ignorant.”

“There is no ‘new swastika’, and frankly your inability to understand that on an ethical and culturally sensitive way is downright disturbing,” a social media user wrote in one of the less profane comments. “And absolutely anti-Semitic. Shut this campaign off.”

Others tried to give the brand the benefit of the doubt – but, even then, accused the designers of glossing over why the swastika had become problematic for the sake of profit.

“Trying to ‘reclaim’ the swastika to be edgy is an insult to all the people who lost their lives during that war,” another social media user wrote. “I hope you take down that video and issue an apology, or your company is going to end up crashing and burning. We get what you were trying to accomplish, but some things need to just stay in the past and be burnt. Not everything can and should be reclaimed. Please rethink this. You can still save your company with an apology.”

It’s unclear who is behind KA Design or where they are based. Reached by email Monday, a representative said the company did not want to reveal any such information before a “public launch very soon.”

Prior to the July 12 video, there were no other posts on the studio’s social media page.

KA Design had reportedly been selling T-shirts on an online marketplace for independent designers akin to Etsy. By Monday, none of its products were available on the third-party site; however, a cached version of its page showed a short-sleeve T-shirt with a rainbow swastika and the word “peace”, was priced at $21.99, while a long-sleeve version was $26.99.

In an interview with Dazed and Confused magazine, a representative of KA Design defended the company’s attempt.

“We really like the symbol in its shape and aesthetics, and we would love to share the beauty of this symbol detached from the Hatred associated with it,” the unnamed person told the magazine. “This project only represents the first step of our ‘master plan,’ and we are excited about what the future will give us.”

The person also said that no one at the brand had any fashion experience and declined to give any sales figures.

“We don’t consider ourselves as skilled fashion designers, but more as artists and free thinkers in general,” the KA Design representative told Dazed and Confused. “We have some plans for the future that we are not going to reveal. We hope to be able to extend our Swastika line to new design concept and colors, while keeping our current peace message.”

The Dazed and Confused interview, published over the weekend, didn’t seem to help KA Design’s cause. From a design perspective, the magazine criticized the brand’s T-shirts as really messy and an idea that was “both crass and badly executed.”

It also caught the attention of the Anti-Defamation League, which decried the shirts as “an offensive use of Nazi imagery.”

“Fashion can’t reclaim this symbol from #hate,” the ADL wrote on Twitter.

By Monday, the swastika shirts were no longer available for sale on Teespring.

The third-party site did not immediately respond to a request for comment.

However, its Twitter account was actively replying to those who had expressed concern about “pro-Nazi designs” on Teespring, with a company representative noting that the site “does not support or allow hate speech” and promising that “we are most certainly taking care of it.”

Meanwhile, KA Design released a statement Monday that seemed to acknowledge its campaign had failed.

“Teespring has nothing to do with our project,” the brand wrote. “It is a beautiful company with the nicest people around. Leave all the Hate to us.”