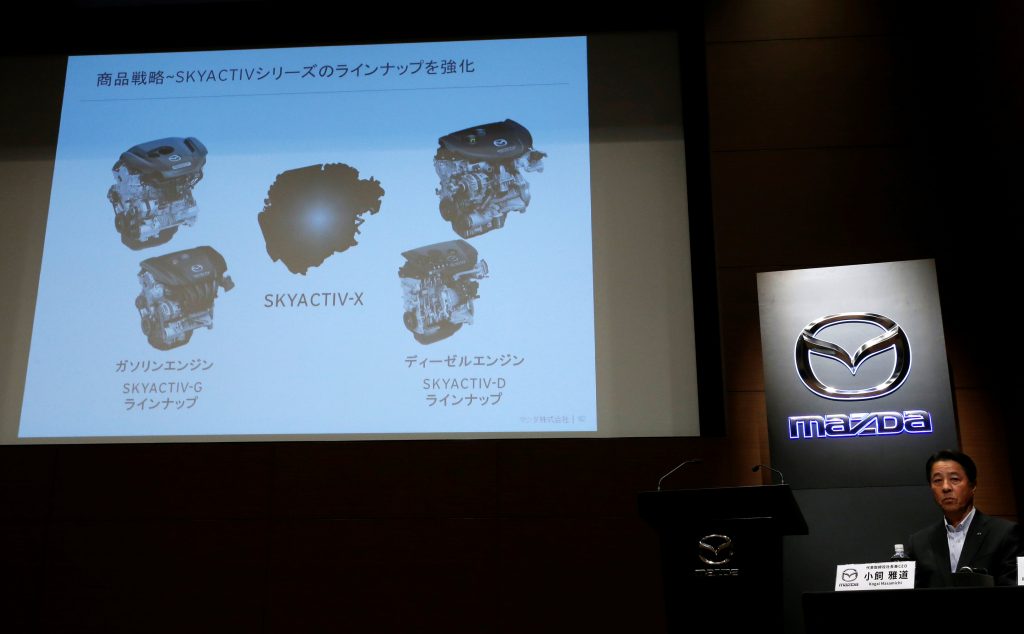 Mazda Motor Corp. said it would become the world’s first automaker to commercialize a much more efficient gasoline engine using technology that deep-pocketed rivals have been trying to engineer for decades, a twist in an industry increasingly going electric.

The new compression ignition engine is 20- to 30-percent more fuel efficient than the Japanese automaker’s current engines and uses a technology that has eluded the likes of Daimler AG and General Motors Co.

Mazda, with a research and development [R&D] budget a fraction of those of major peers, said it plans to sell cars with the new engine from 2019.

The announcement places traditional engines at the center of Mazda’s strategy and comes just days after Mazda said it will work with Toyota Motor Corp. to develop electric vehicles and build a $1.6 billion U.S. assembly plant.

Mazda’s engine employs spark plugs under certain conditions, such as at low temperatures, to overcome technical hurdles that have hampered commercialization of the technology.

The engine is called SKYACTIV-X and Mazda had no plans to supply the engine to other carmakers, Marumoto said.

AEMSS’ Miyashita said a key issue would be how smooth and responsive the engine is.

“Is it jerky? If so, that would pose a big question when it comes to commercializing this technology.” he said. “Hopefully Mazda has an answer to that question.”

Mazda also said it would introduce electric vehicles and electric technology in its cars from 2019, focusing on markets that restrict the sale of certain vehicles to limit air pollution or that provide clean sources of electricity.

In addition, it said it aimed to make autonomous-driving technology standard in all its models by 2025.

Mazda announced its gasoline-engine technology breakthrough on the same day that shares in Japan’s GS Yuasa Corp surged, after a newspaper reported that it would start producing a lithium battery that would double the range of electric cars as early as 2020.

Mazda’s share price closed down 1.3 percent. That compared with a 0.3 percent fall in the benchmark Nikkei 225 index.