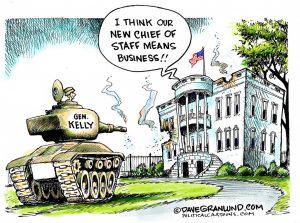 Much has been made of the turbulence that has reigned in President Trump’s White House during the twister that’s been the first six months of his tenure. Despite Mr. Trump’s frequent protestations to the contrary via early morning Twitter missives, the evidence for the discord and disunity that rankles the ranks of the executive branch is everywhere, not least in the personnel upheavals that have peaked in recent weeks.

Of course, none of the hijinks that have ensued have come as much of a surprise to anyone who paid attention to the election campaign, which Mr. Trump conducted in much the same manner, burning through campaign managers, never minding the minders, and generally careening from crisis to crisis, often self-inflicted and then needlessly prolonged.

Still, while the president insists that all is well with the “fine-tuned machine” he has unleashed in the executive mansion, the whispers that he is swiftly becoming irrelevant on Capitol Hill and even within his own cabinet have been getting louder, and Mr. Trump has decided that it’s time for changing pace and saving face.

Enter John Kelly. Last week’s retired four-star Marine Corps general, yesterday’s U.S. secretary of homeland security, and today’s White House chief of staff, he has been summoned to bring Trump’s promise of a “law and order” administration to the administration, to put the leakers, backbiters, benchwarmers and self-defeaters in their place — even if that includes the president himself.

And after nary a week and a half, the reviews are starting to pour in, or rather — as per White House custom — out. The Washington journalists of choice that the leak-decriers love to leak to will have us know that the White House culture has been transformed. The patchy scarecrow Scaramucci has been dispatched posthaste to eat crow; the Oval Office is no longer open for traffic to anyone in the vicinity with a grievance to air or a contrivance to share; the cast of competing characters who yanked the president to, fro and around are all to dutifully report now to their superior through the man who guards the anterior; and the president himself might even start putting the “president” in “presidential.”

But enough of that. Let’s put aside the question of whether the pundits’ unsettling law that every action undertaken to rein Trump in ultimately ends in an opposite reaction is settled science, or if anyone can ever really be empowered to take the president’s favorite shows and unkickable tweeting habit away, or whether Kelly’s tenure will last weeks or months before Trump starts nicknaming him “beleaguered.”

The possibly more intriguing question is: What does Kelly’s appointment bode for the future in terms of White House policy? Mr. Trump’s political opinions over the years have been a mishmash of miscellaneous and often diametrically unsquarable sentiments and urges, before they were forged in the heat of the 2016 campaign into the hardened mold of Steve Bannon. Yet the White House has still been riven by the rivalry between the Flynn-Bannon-Gorka “alt-right” troika and the more conventional McMaster-Tillerson-Mattis conclave. What role might Kelly play in this fitful drama, and what plot twists might there be on the way to the denouement? Is Kelly simply here to lay down the law, or will he be taking the White House in a new direction?

McMaster and Co. belong to the much-ballyhooed Washington establishment; that’s a dog whistle used to describe individuals with a professional background who came by their stripes the old-fashioned way — by studying and working hard until they rose in the ranks to prominence by dint of their accomplishments. They tend to subscribe to traditional American notions of how to leverage our military muscle and diplomatic deftness in the service of the balance that we seek between global participation and national security. Those ideas don’t always fit well in the space of a tweet, but then maybe it’s tweets that don’t fit well in the space of ideas. Of course, there is a legitimate spectrum of opinion among the folks who do governing for a living, and their respective successes and failures dot the historical landscape and remain the subject of further study and explication.

Bannon and his band, by contrast, believe that America’s national interests are being held captive in the hands of said establishment whom they’ve branded “globalists” (an epithet with undertones that might be disturbing to some), and are harnessing the power of tweets and hashtags (and maybe a tiny amount of help from some Eastern Europeans along the way) to take their country back from its insidious interlopers. And if the professionals across the political spectrum push back, well, that’s just further evidence that the “deep state” will stop at nothing to do their jobs.

Enter President Trump, who discovered that these ideas do, in fact, fit well in tweets as well as in punchy campaign speeches delivered to those who feel disenfranchised and angry at the world. Kelly, by contrast, while supportive of certain policies like tightening immigration enforcement, still seems firmly a part of the generals’ camp, referred to by some as “the adults in the administration,” and finds himself in his new surroundings less due to sharing a kindred spirit with Trump and more as a result of a soldier’s duty to do what he can for his country.

As for President Trump, he does not appear entirely sold on the ideas that he rode to electoral victory. He seems animated by, more than anything else, the desire for “winning,” whatever the means it may come by. And if Bannon proves good for winning over working whites in Wisconsin but not the wet blankets in Washington D.C., he won’t hesitate to sideline him and bring in generals that have “winning” in their résumé. And if Kelly happens to side with McMaster (as the recent purges in the National Security Council suggest), then so be it. For a maximum of six months, that is.