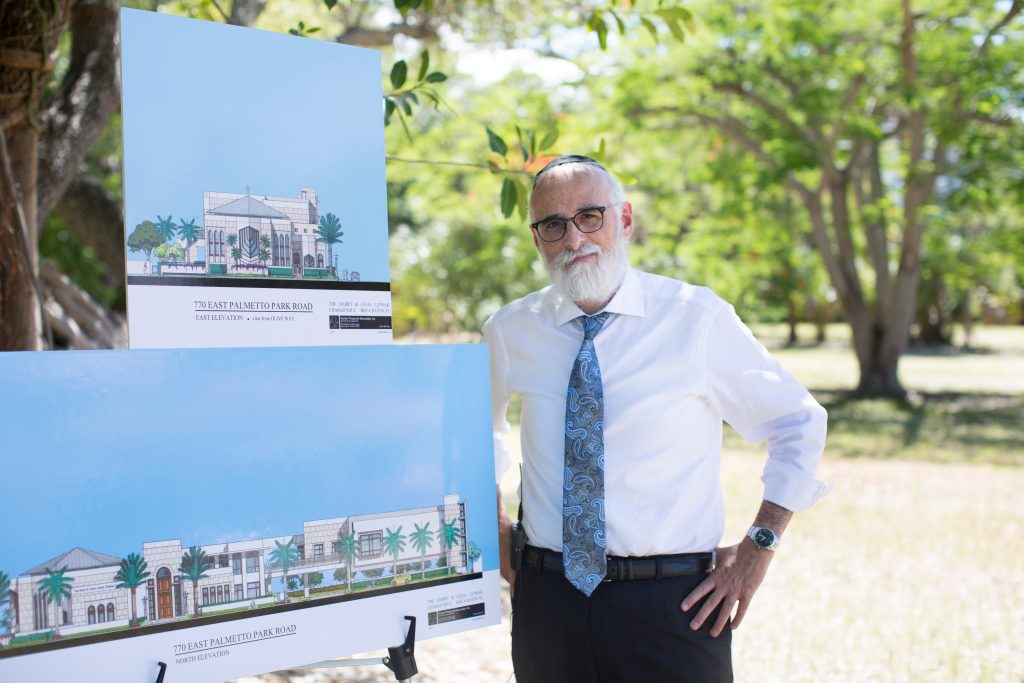 A broad base of Orthodox groups, city officials and others have filed briefs in support of Chabad of Boca Raton, whose efforts to build a permanent facility have met legal opposition from locals and secularist legal advocates, as their case heads to a federal appeals court.

Disputes over zoning decisions are not uncommon, and in recent years many have focused on preventing the expansion of Orthodox groups. In many instances where such challenges are aimed at religious institutions, faith groups respond by claiming that they are facing discrimination in violation of their First Amendment rights.

In this case, a unique twist is plaintiff’s claim that the city’s decision to change ordinances to accommodate Chabad is a violation of the First Amendment’s clause not to “establish religion.” Their suit against the city of Boca Raton has raised particular interest from Jewish groups and other advocates of religious liberty.

Legal experts told Hamodia that this was the first case they were aware of in which plaintiffs claimed that allowing a faith group to build on private land constituted government establishment of religion.

A support brief on behalf of Agudath Israel of America, Chabad-Lubavitch World Headquarters, the Orthodox Union, the Rabbinical Council of America, and several other groups argues that “such an anti-religious reading of the First Amendment would prevent governmental actors from doing things like providing chaplains or kosher food to Jews in prison or in the military.”

“The Plaintiffs’ argument would turn religious believers into second-class citizens,” reads the brief in part. “The First Amendment was never intended to make America inhospitable to religious practitioners.”

The filing was authored by noted attorney Alan Dershowitz, who serves as an honorary co-chair of Chabad of Boca Raton’s “My Israel” center.

The Chabad house, under the leadership of Rabbi Ruvi New, has been trying to build larger facilities to meet the needs of its growing congregation for nearly a decade. Several plans met with grassroots resistance, claiming the shul and planned community center would create congestion and change the nature of the neighborhood.

In 2015, the city unanimously approved Chabad’s plans, but was quickly hit with a lawsuit on behalf of Gerald Gagliardi and Kathleen MacDougall, who live close to the planned site and say they will be injured by the traffic they claim the shul will bring, as well as its likelihood of “alter[ing] the beach-oriented, relaxed, and low-intensity character of the Seaside Village.” They are represented by Marci Hamilton, a New York-based legal scholar with a history of advocating against the expansion of rights for religious groups.

The ongoing legal battle has forced Chabad of East Boca to shelve plans to build the $10 million, 18,000-square-foot facility it drafted years ago.

Lower federal courts have twice rejected Gagliardi and MacDougall’s claims, saying they have “fail[ed] to allege any injury at all” and therefore have no legal grounds on which to base their claims.

“In a way, [the plaintiffs] did us a favor by putting their arguments in such bold terms; it highlights how damaging their argument would be for all religious groups,” Mr. Slugh told Hamodia. He added that even if the court does not rule on the broader implications and only upholds lower court discussions to deny standing, “it would still go a long way in saying that anybody who has a problem with religious needs can’t just decide he is an injured party,” he said.

An additional brief submitted by religious, civic, and business leaders, and former city officials from Boca Raton, spoke of the city’s support for “the notion that religious people and institutions are entitled to participate in public life on an equal basis with everyone else.”

“As leaders in the Boca Raton community, amici affirm that Chabad has long been a welcome part of Boca Raton and that the new synagogue would be equally welcome,” reads the brief.

Daniel Blomberg, counsel at Becket, a public-interest law firm that advocates for religious liberties, which is representing Chabad of East Boca Raton, told Hamodia that the case has many similarities to other attempts at limiting the activities of religious groups, but that using Marci Hamilton to “take a shot at RILUPA,” a federal law protecting religious land use, makes the case “exceptional.”

“These folks deserve an equal right to build with any other organization in the city,” he said. “The plaintiffs could have gone to state court and disputed the zoning decision, but to make this a federal case and say that allowing a synagogue to be built is unconstitutional has the potential to hurt all religious groups.”