Politics On Behalf of Trump, Pence Carves His Own Political ID
Politics 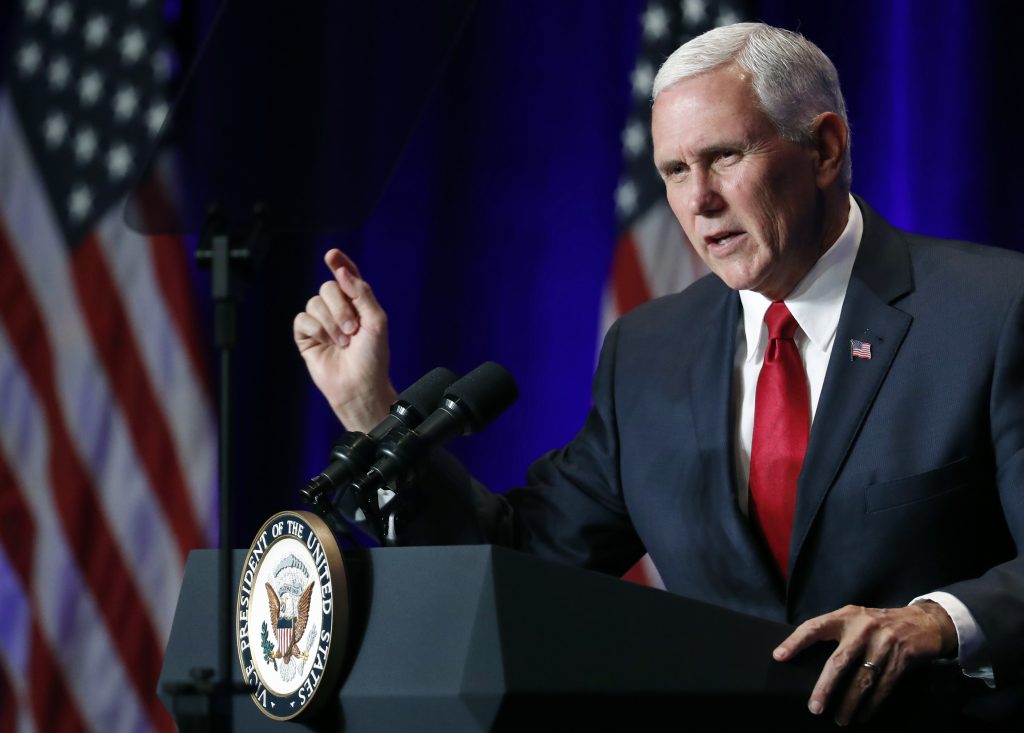 Shuttling across the country aboard Air Force Two, Vice President Mike Pence has been a loyal messenger for President Donald Trump. At the same time, he has been carving out his own political identity as the steady understudy to a mercurial president.

The Republican vice president has raised more than $1 million in recent months for his political committee, headlined GOP events in such key states as Iowa and Ohio, and hosted Republican VIPs for dinner at his formal residence in Washington. Pence is also preparing to take his fourth overseas trip in the last six months, a schedule that has removed him from the Trump White House’s daily palace intrigue and the special counsel’s investigation into the Trump administration’s ties with Russia.

The vice president’s push-and-pull with President Trump was reflected in his office’s vigorous response to a New York Times report that suggested he might be taking steps to position himself for a 2020 presidential campaign. Pence said in a lengthy statement Sunday that the report was “categorically false.” The vice president’s spokesman made multiple appearances on cable networks Monday to push back against the story.

“The political activities of the vice president are 150 percent in support of the president’s agenda. Anyone who asserts otherwise is uninformed,” said Phil Musser, a longtime Pence adviser.

Few Republican operatives believe that. Pence would challenge Trump in the 2020 Republican primary election. But at the same time, Republicans privately concede that Trump could be the first president since Richard Nixon to leave office mid-term or not to seek re-election — either for political or personal reasons. Mr. Pence would be ill-advised not to prepare for an early Trump exit, as unlikely as it may be, they say.

As President Trump’s approval ratings sag, Mr. Pence is bound by a delicate political reality: His fate is likely tied to Mr. Trump’s. A successful Trump presidency could help position the 58-year-old Pence to run for president in 2024. A failed Trump presidency, by contrast, could forever stain Mr. Pence’s political future. Beyond his frequent travel, the vice president has sought to separate himself from special counsel Robert Mueller’s investigation into ties between the Trump campaign and Russian officials.

When questions arose about President Trump’s eldest son, Donald Trump Jr., and other Trump officials meeting with a Russian attorney in June 2016, Mr. Pence’s office issued a terse statement noting that it took place before he joined the Trump ticket. His spokesman later added that Vice President Pence did not meet with any Russians during the campaign.

Mr. Pence has also traveled to nine countries as vice president so far and plans to make a four-nation trip to South America next week, creating space between his office and the churn of stories about White House shake-ups or the president’s tweets.

But he has loyally backed Mr. Trump’s policies and agenda. Mr. Pence, who served in Congress for a dozen years, rarely begins a speech without passing along the president’s greetings and has acted as President Trump’s chief lobbyist on Capitol Hill, convening weekly dinners with Republican lawmakers and business leaders at his residence at the Naval Observatory. Even in private meetings, Mr. Pence doesn’t deviate from his effusive Trump praise.

“He’s an experienced legislator who can help bridge gaps between members of our conference or between the Congress and the president,” said Sen. Tom Cotton (R-Ark.), who attended a dinner in late June.

The meetings help strengthen the vice president’s political network in the long term. But they also help the Trump administration’s connection to an anxious Republican establishment in the short term.

“We’re in the midst of a very unconventional presidency that makes a lot of Republicans in the establishment uneasy,” veteran GOP operative Ryan Williams said. “I think some ambitious Republicans have the thought in the back of their minds that if something were to happen, they may run. But they would never launch a primary challenge against Trump.”

Mr. Pence stoked discussions about his political future when he formed his Great America Committee in May, allowing him to raise money to support Republican candidates and fund political travel.

More recently, the committee raised $1 million at a Washington fundraiser that included an introduction from the president’s daughter and senior adviser, Ivanka Trump, and featured Republican congressional leaders and dozens of lawmakers. FEC filings show the committee paid $50,000 in consulting fees in June to the Atlanta firm of Pence adviser Nick Ayers, a Republican strategist who was brought aboard by Mr. Pence this summer to be his chief of staff. It also paid more than $60,000 to the Indiana firm led by Pence adviser Marty Obst.

The vice president’s office has downplayed the PAC’s creation, saying the former governor needed to start a federal committee to pay for his political activities.

Mr. Pence also remains an important liaison to President Trump’s conservative base. His public schedule has included addresses to Christian leaders who have stuck with Mr. Trump despite his lagging approval ratings, groups like Focus on the Family and the World Summit in Defense of Persecuted Christians, which was organized by Franklin Graham.

In June, Mr. Pence and a group of aides discussed health care and taxes during a closed-door meeting with industrialist billionaire Charles Koch and his chief lieutenants on the sidelines of the conservative group’s Colorado conference.

As the meeting was breaking up, the vice president took Charles Koch’s arm and said, “Can you stick around for a few minutes?” The aides departed, leaving Pence and Koch in the room for a private meeting.

Mr. Pence will be headlining another Koch event later this month in Richmond, Va., where he will also raise money for former Republican National Committee Chairman Ed Gillespie, who is running for Virginia governor.