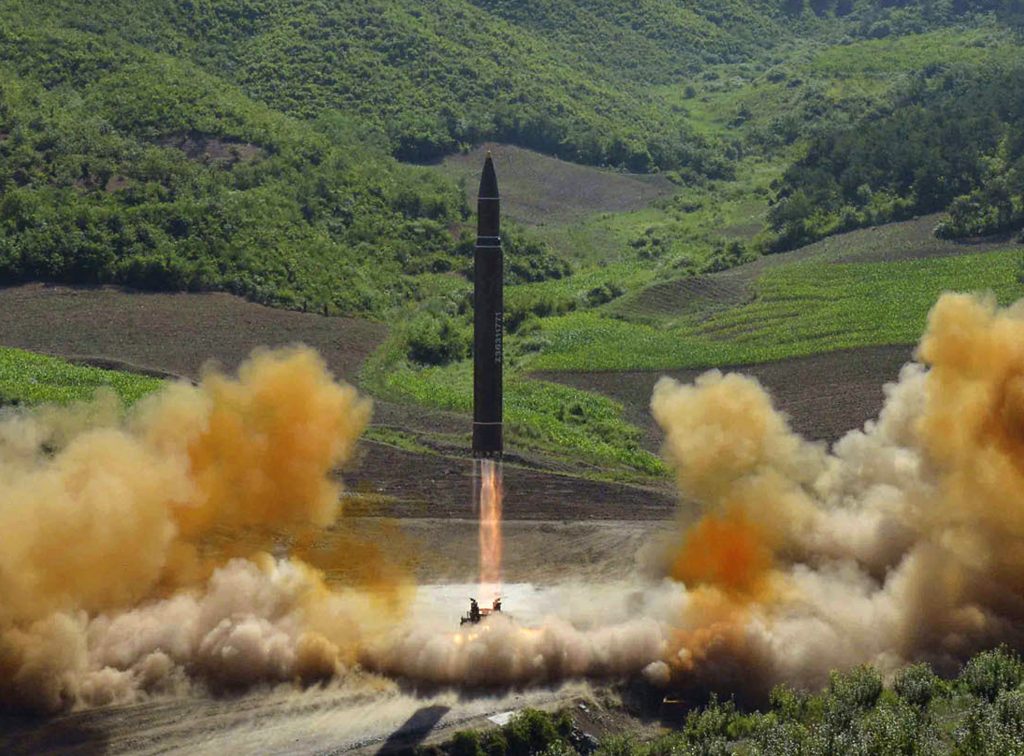 North Korea has successfully produced a miniaturized nuclear warhead that can fit inside its missiles, crossing a key threshold on the path to becoming a full-fledged nuclear power, U.S. intelligence officials have concluded in a confidential assessment.

The new analysis, completed last month by the Defense Intelligence Agency, comes on the heels of another intelligence assessment that sharply raises the official estimate for the total number of bombs in the communist country’s atomic arsenal. The U.S. calculated last month that up to 60 nuclear weapons are now controlled by North Korean leader Kim Jong Un. Some independent experts believe the number of bombs is much smaller.

The findings are likely to deepen concerns about an evolving North Korean military threat that appears to be advancing far more rapidly than many experts had predicted. U.S. officials last month concluded that Pyongyang is also outpacing expectations in its effort to build an intercontinental ballistic missile capable of striking cities on the American mainland.

While more than a decade has passed since North Korea’s first nuclear detonation, many analysts believed it would be years before the country’s weapons scientists could design a compact warhead that could be delivered by missile to distant targets. But the new assessment, a summary document dated July 28, concludes that this critical milestone has already been reached.

“The IC [intelligence community] assesses North Korea has produced nuclear weapons for ballistic missile delivery, to include delivery by ICBM-class missiles,” the assessment states, in an excerpt read to The Washington Post. The assessment’s broad conclusions were verified by two U.S. officials familiar with the document. It is not yet known whether the reclusive regime has successfully tested the smaller design, although North Korea officially last year claimed to have done so.

The DIA and the Office of the Director of National Intelligence declined to comment.

An assessment this week by the Japanese Ministry of Defense also concludes there is evidence to suggest that North Korea has achieved miniaturization.

President Donald Trump, speaking at an event at his Bedminster, New Jersey, gold course, said North Korea will face a devastating response if its threats continue.

“They will be met with the fire and fury and frankly power, the likes of which this world has never seen before,” Trump said.

Kim Jong Un is becoming increasingly confident in the reliability of his nuclear arsenal, analysts have concluded, explaining perhaps the dictator’s willingness to engage in defiant behavior, including missile tests that have drawn criticism even from North Korea’s closest ally, China. On Saturday, both China and Russia joined other members of the U.N. Security Council in approving punishing new economic sanctions, including a ban on exports that supply up to a third of North Korea’s annual $3 billion earnings.

The nuclear progress further raises the stakes for President Trump, who has vowed that North Korea will never be allowed to threaten the United States with nuclear weapons. In an interview broadcast Saturday on MSNBC’s Hugh Hewitt Show, national security adviser H.R. McMaster said the prospect of a North Korea armed with nuclear-tipped ICBMs would be “intolerable, from the president’s perspective.”

“We have to provide all options . . . and that includes a military option,” he said. But McMaster said the administration would do everything short of war to “pressure Kim Jong Un and those around him, such that they conclude it is in their interest to denuclearize.” The options said to be under discussion ranged from new multilateral negotiations, to reintroducing U.S. battlefield nuclear weapons to the Korean Peninsula, officials familiar with internal discussions said.

Determining the precise makeup of North Korea’s nuclear arsenal has long been a difficult challenge for intelligence professionals because of the regime’s culture of extreme secrecy and insularity. The country’s weapons scientists have conducted five nuclear tests since 2006, the latest being a 20- to 30-kiloton detonation on Sept. 9, 2016, that produced a blast estimated to be up to twice that of the bomb dropped on Hiroshima, Japan, in 1945.

But producing a compact nuclear warhead that can fit inside a missile is a technically demanding feat, one that many analysts believed was still beyond North Korea’s grasp. Last year, state-run media in Pyongyang displayed a spherical device that government spokesmen described as a miniaturized nuclear warhead, but whether it was a real bomb remained unclear. North Korean officials described the September detonation as a successful test of a small warhead designed to fit on a missile, though many experts were skeptical of the claim.

Kim has repeatedly proclaimed his intention to field a fleet of nuclear-tipped ICBMs as a guarantor of his regime’s survival. His regime took a major step toward that goal last month with the first successful tests of a missile with intercontinental range. Video analysis of the latest test revealed that the missile caught fire and apparently disintegrated as it plunged back toward Earth’s surface, suggesting North Korea’s engineers are not yet capable of building a reentry vehicle that can carry the warhead safely through the upper atmosphere. But U.S. analysts and many independent experts believe that this hurdle will be overcome by late next year.

“What initially looked like a slow-motion Cuban missile crisis is now looking more like the Manhattan Project, just barreling along,” said Robert Litwak, a nonproliferation expert at the Woodrow Wilson International Center for Scholars and author of “Preventing North Korea’s Nuclear Breakout,” published by the center this year. “There’s a sense of urgency behind the program that is new to the Kim Jong Un era.”

While few discount North Korea’s progress, some prominent U.S. experts warned against the danger of overestimating the threat. Siegfried Hecker, director emeritus of the Los Alamos National Laboratory and the last known U.S. official to personally inspect North Korea’s nuclear facilities, has calculated the size of North Korea’s arsenal at no more than 20 to 25 bombs. Hecker warned of potential risks that can come from making Kim into a bigger menace than he actually is.

“Overselling is particularly dangerous,” said Hecker, who visited North Korea seven times between 2004 and 2010, and met with key leaders of the country’s weapons programs. “Some like to depict Kim as being crazy – a madman – and that makes the public believe that the guy is undeterrable. He’s not crazy and he’s not suicidal. And he’s not even unpredictable.”

“The real threat,” Hecker said, “is we’re going to stumble into a nuclear war on the Korean Peninsula.”

In the past, U.S. intelligence agencies have occasionally overestimated the North Korean threat. In the early 2000s, the George W. Bush administration assessed that Pyongyang was close to developing an ICBM that could strike the U.S. mainland – a prediction that missed the mark by more than a decade. More recently, however, analysts and policymakers have been taken repeatedly by surprise, as North Korea achieved key milestones months or years ahead of schedule, noted Jeffrey Lewis, director of the Center for Nonproliferation Studies’ East Asia Nonproliferation Program. There was similar skepticism about China’s capabilities in the early 1960s, said Lewis, who has studied that country’s pathway to a successful nuclear test in 1964.

“There is no reason to think that the North Koreans aren’t making the same progress after so many successful nuclear explosions,” Lewis said. “The big question is why do we hold the North Koreans to a different standard than we held [Joseph] Stalin’s Soviet Union or Mao Zedong’s China? North Korea is testing underground, so we’re always going to lack a lot of details. But it seems to me a lot of people are insisting on impossible levels of proof because they simply don’t want to accept what should be pretty obvious.”