National Tillerson: U.S. to Respond by Sept. 1 to Russia’s Expulsion of Diplomats
National 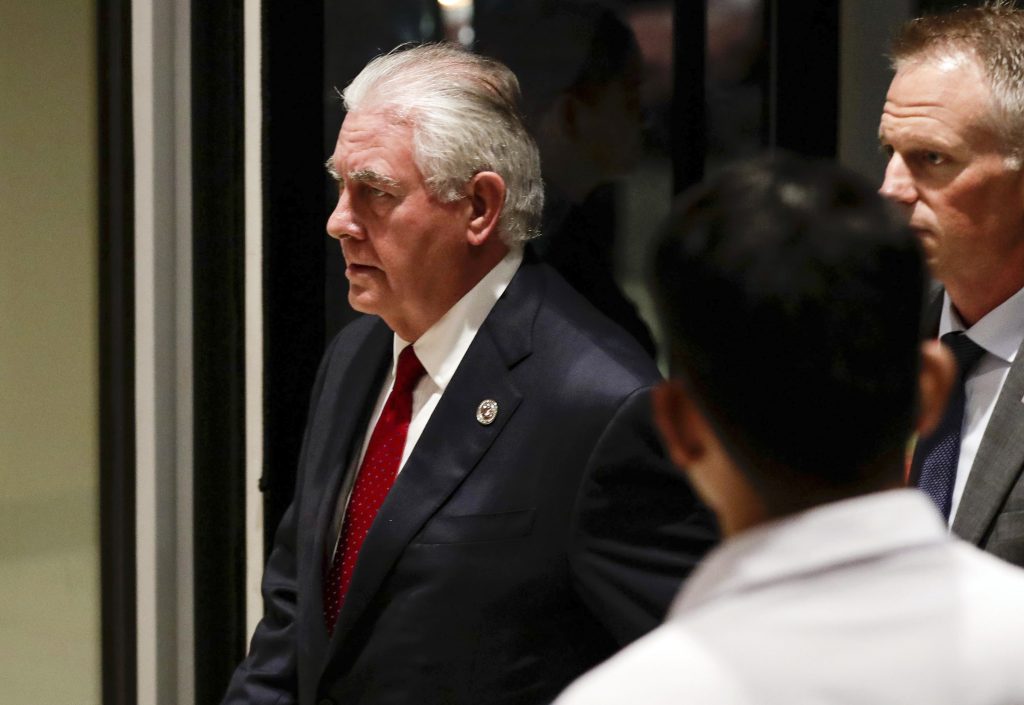 The Trump administration has yet to decide how to respond to Russia’s move to expel hundreds of American diplomats, but plans to deliver a response to Moscow by Sept. 1, U.S. Secretary of State Rex Tillerson said Monday.

A day after sitting down in the Philippines with Russia’s top diplomat, Tillerson said he’d asked “clarifying questions” about the Kremlin’s retaliation announced last month following new sanctions passed by Congress and signed by President Donald Trump. The Trump administration has struggled to determine how the move will affect the U.S. diplomatic presence in Russia, as well as the broader implications for the troubled relationship between the nuclear-armed powers.

Despite the Russian move, which seemed to plunge the two countries even further into acrimony, Russian Foreign Minister Sergey Lavrov emerged from the meeting declaring a readiness for more engagement with the U.S. on North Korea, Syria and Ukraine, among other issues. Tillerson broadly echoed that sentiment, saying the two countries had critical national security issues to discuss despite deep disagreements on some matters.

“I don’t think it is useful to just cut everything off on one single issue,” Tillerson said following his first meeting with Lavrov since the new sanctions were imposed. “These are two very large countries and we should find places that we can work together, let’s try to work together. Places we have our differences, we’re going to have to continue to find a way to address those.”

Sec. Tillerson also said that Russia has been showing “some willingness” to start talking about a resolution to the crisis in Ukraine, devoid of real progress for years. That assessment came as FM Lavrov announced that the Trump administration had committed to sending its new special envoy for Ukraine negotiations, Kurt Volker, to Moscow to discuss next steps.

Fearing President Trump might move inappropriately to ease sanctions on Russia, Congress last month passed new legislation that both added more sanctions and made it harder for the president to lift them. President Trump and Secretary Tillerson opposed the legislation, but facing a likely veto override, Trump begrudgingly signed the bill.

Moscow’s response to the sanctions was to announce it would force the U.S. to cut its embassy and consulate staff in Russia by 755 people. That move stoked confusion in Washington, given that the U.S. is believed to have far fewer than 755 American employees in Russia.

FM Lavrov, describing his meeting with Secretary Tillerson, said Russia and the U.S. had agreed to resume a high-level diplomatic channel that Moscow had suspended after a previous U.S. move to tighten existing Russia sanctions.

“We felt that our American counterparts need to keep the dialogue open,” Lavrov said. “There’s no alternative to that.”

Trump’s administration has argued there’s good reason for the U.S. to seek a more productive relationship. Sec. Tillerson has cited modest signs of progress in Syria, where the U.S. and Russia recently brokered a ceasefire in the war-torn country’s southwest, as a sign there’s fertile ground for cooperation.

The Syrian ceasefire reflected a return of U.S.-Russia cooperation to lower violence there. The U.S. had looked warily at a series of safe zones in Syria that Russia had negotiated along with Turkey and Iran — but not the U.S.

FM Lavrov cited upcoming talks involving Russia, Iran and Turkey about how to ensure the truce in the last safe zone to be established, around the northwestern city of Idlib. He predicted “it will be difficult” to hammer out the details but that compromise can be reached if all parties — including the U.S. — use their influence in Syria to persuade armed groups there to comply.

Sec. Tillerson said Russian meddling in the election had “created serious mistrust between our two countries.” Although he and other Cabinet officials have maintained that position consistently, President Trump has repeatedly questioned U.S. intelligence about Moscow’s involvement while denying any collusion with his campaign.

Word that Volker, the Ukraine envoy, plans to visit the Russian capital was the latest sign that Washington was giving fresh attention to resolving the Ukraine conflict. The U.S. cut military ties to Russia over Moscow’s annexation of Crimea and accuses the Kremlin of fomenting unrest in eastern Ukraine by arming, supporting and even directing pro-Russian separatists there who are fighting the Kiev government.

In recent days, the Trump administration has been considering providing lethal weaponry to Ukraine to help defend itself against Russian aggression.