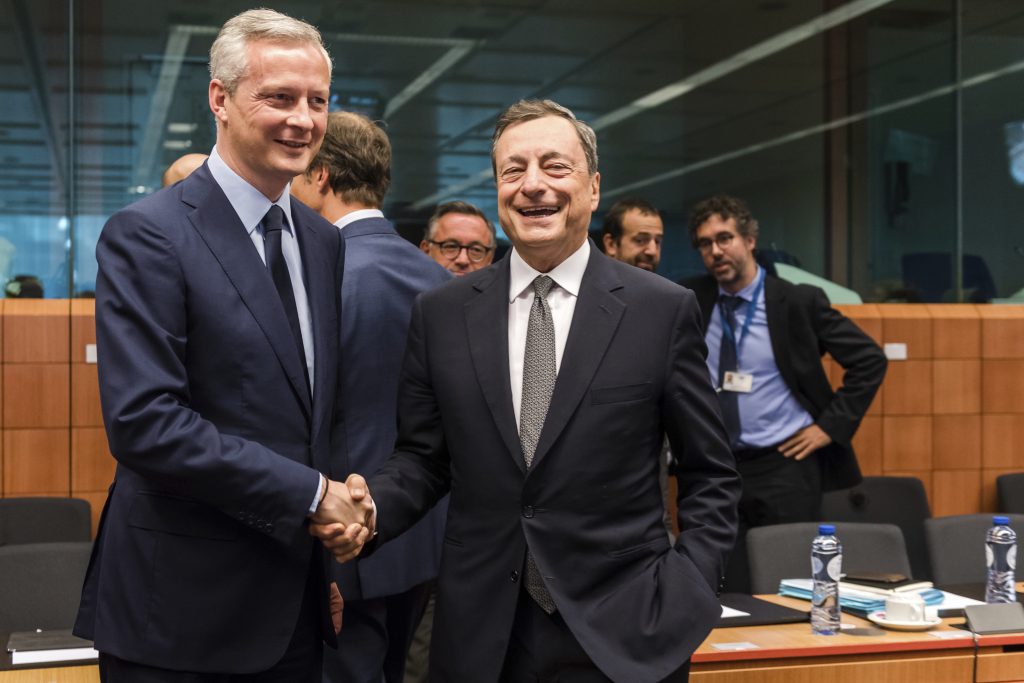 With Draghi’s term expiring in 2019, Bundesbank President Jens Weidmann has been frequently touted as a successor. That could potentially be part of a broader deal that would see Germany agree to tighten its ties with the rest of the bloc. Le Maire sought to take that option off the table, arguing that euro members should aim to make progress on integration before discussing who should lead the central bank.

“We still have some time before deciding who will be the next chair of the ECB,” Le Maire said in a tv interview at his office in Paris last week. “But we should not wait before taking decisions as far as the integration of the euro zone is concerned.”

French President Emmanuel Macron won the election in May promising to reinvigorate the European project after a decade of crisis and Angela Merkel, his German counterpart, has agreed that now is the time to shore up the foundations of the euro area.

Germany has so far resisted pressure to complete the banking union by joining a common deposit guarantee fund, concerned that its taxpayers might wind up on the hook for existing problems lurking on bank balance sheets in other countries. Italy and Spain were both forced to organize rescues for struggling lenders earlier this year, a decade after the first tremors of the subprime crisis.

Beyond the banking union, European leaders, including Draghi, set out their aspirations in a 2015 report that envisaged more capital-markets integration, a common fiscal policy and, ultimately, a political union to underpin the economic project by 2025.

“Spain wants to strengthen and deepen the common European project,” he told reporters after meeting King Felipe in Mallorca. “We will present a proposal that allows us to work on defense, create a shared budget for the EU, a European finance minister and the creation of eurobonds issued by a European Treasury.”

Le Maire proposed as a first step that euro members should agree a framework for bringing their tax regimes into closer alignment and sketch out a so-called European Monetary Fund to take on the role of lender of last resort within the bloc.

“I really think that we should be able at the end of 2017 to make a first step toward more integration within the euro zone,” he said, citing December’s summit in Brussels as a target.

Appointing Weidmann as head of the ECB would call into question the monetary regime that has underpinned euro-area markets ever since Draghi promised in 2012 to do “whatever it takes” to hold the euro together. The Bundesbank president has been a vocal critic of Draghi’s policies in recent years as German public opinion became increasingly hostile to the ECB’s policy of flooding bond markets with newly created money to cap borrowing costs.

Still, in a pinch such a move could become a way to break the impasse between Germany and its partners, and help Merkel, or her successor, sell a broader deal on integration to a skeptical German public. French central bank governor, Francois Villeroy de Galhau, is also considered to be a candidate and it’s conceivable that leaders could agree to appoint a finance minister for the bloc as well, an idea that Macron has been pushing.

Draghi’s appointment will come into play as part of a broader turnover of senior European posts. Elections to the parliament are due in May 2019 and Jean-Claude Juncker’s term as head of the European Commission expires in October 2019, the same month that Draghi himself is due to step down.