Politics Rosenstein: Mueller Can Investigate Any Crimes He Uncovers in Russia Probe
Politics 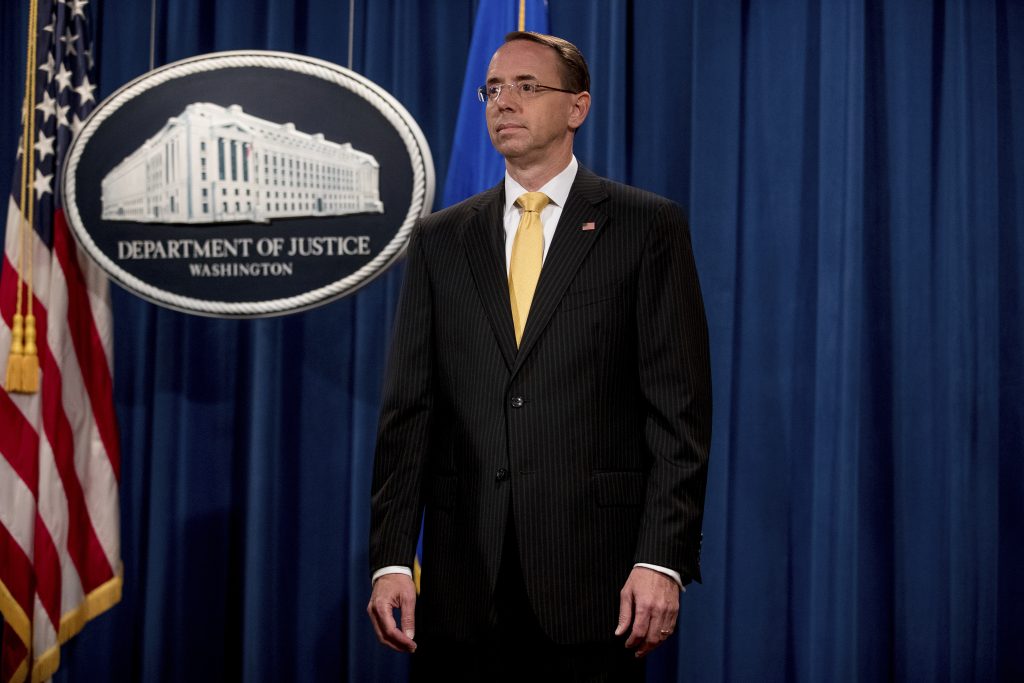 Deputy Attorney General Rod Rosenstein said Sunday that the expanding investigation into Russian interference in the 2016 presidential election is continuing apace, even as President Donald Trump dismissed the probe as “a total fabrication.”

Rosenstein said special counsel Robert S. Mueller III can investigate any crimes that he might discover within the scope of his probe, but would not discuss which individuals are the subject of their inquiry. The interview comes days after Mr. Trump said he believes it would be inappropriate for Mueller to dig into Trump family finances.

“The special counsel is subject to the rules and regulations of the Department of Justice, and we don’t engage in fishing expeditions,” Rosenstein said when asked about the probe in an interview on Fox News.

Rosenstein declined to comment on reports that Mueller is using a grand jury in a court in Washington to aid in his investigation, but he said that such a step is a routine part of “many investigations.”

“It’s an appropriate way to gather documents, sometimes to bring witnesses in, to make sure that you get their full testimony,” Rosenstein said. “It’s just a tool that we use like any other tool in the course of our investigations. ”

President Trump and his inner circle have repeatedly dismissed the investigation amid frequent reporting that Mueller and his team are digging into broader details on the financial dealings of members of Mr. Trump’s campaign team. Senior White House counselor Kellyanne Conway called the probe a “fabrication” in an interview on ABC. Mr. Trump called it “the totally made up Russia story” in a campaign-style speech he delivered Friday in West Virginia.

The attacks have raised concerns among Democrats and some Republicans that President Trump may be looking for ways to undermine the investigation. Those fears led Sens. Thom Tillis, R-N.C., and Chris Coons, D-Del., to propose legislation that would give a judge the ability to review any decision by the president to fire Muller.

Tillis said Sunday that he does not agree that the investigation is a witch hunt, and said the bill is intended to bolster the independence of the Department of Justice.

“We’ll let the facts lead us to whether or not it was a hoax or a distraction,” Tillis said during an interview. “But we are where we are, and I want to see this investigation concluded so that we can get on to doing the good work the president has already started with regulatory reform, health care and tax reform.”

Rep. Adam Schiff, D-Calif., the ranking member of the House Intelligence Committee, called Mueller’s impaneling of a D.C. grand jury “a significant development,” noting that it has been more than a year since former FBI Director James Comey launched a counterintelligence investigation into Russia’s meddling in the 2016 election.

“That means one year later, rather than turning that investigation off, rather than concluding ‘We’ve looked at this for a year, there’s really nothing to see here,’ as the president would claim, instead … it’s moving into a new phase,” Schiff said during an appearance on CNN. “That wouldn’t be taking place if there was really no evidence, no evidentiary basis to move forward.”

He said an additional reason to continue investigating was the disclosure of the June 2016 meeting between Donald Trump Jr., campaign officials and a Russian lawyer, which was set up with the advertised purpose of sharing damaging information on Democratic presidential nominee Hillary Clinton.

“And now you add on the layer of the president, if these allegations are true, helping to fabricate a false statement about what that meeting was about,” Schiff said, referring to the White House’s acknowledgment that President Trump weighed in on an initial statement issued by Trump Jr. about the meeting that did not mention its pretext.

Schiff also said the House Intelligence Committee and Mueller are looking at some of the same issues related to former National Security Adviser Michael Flynn, including payments Flynn allegedly received from Turkey during the final months of the presidential campaign and from RT, a Russian government-backed tv network.

“If General Flynn was shown to have violated the law in other ways, it would be an incentive for him to cooperate more broadly with the Mueller investigation,” Schiff said.

During an appearance on the same CNN program, New Jersey Gov. Chris Christie (R), an ally of the Trump administration, downplayed the significance of a D.C. grand jury being impaneled by Mueller.

“That’s a typical thing to be done in any investigation,” said Mr. Christie, a former federal prosecutor.

Asked about Mr. Trump’s concerns that Mueller’s probe could expand into financial dealings of Mr. Trump unrelated to Russia, Christie said that sometimes special counsels feel “the need to produce something in return for their appointment.”

But he called Mueller “a good man” and said he trusts he will not go on a “fishing expedition.”

“So far… there is absolutely no evidence of any collusion at all between the Trump campaign and the Russians,” Mr. Christie added.