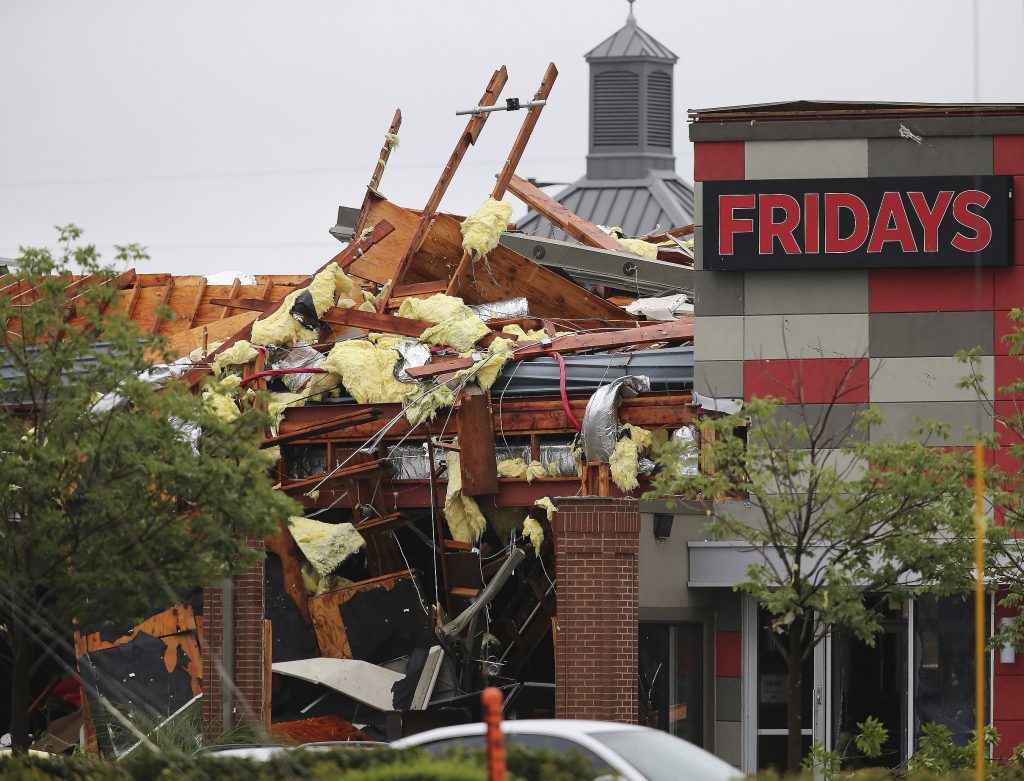 An apparent tornado near midtown Tulsa early Sunday injured more than a dozen people, knocked out power to thousands of customers, heavily damaged businesses, and blew debris through the streets, leaving a “Pet Smart” sign suspended around power lines.

No deaths were reported following the storm that struck shortly after 1 a.m., according to city of Tulsa spokeswoman Kim Meloy. She said at least 13 people were taken to hospitals in undisclosed condition.

An ambulance service spokeswoman did not immediately return a phone call for comment about the injured.

The timing of the storm was fortunate, Meloy said, because hundreds, if not thousands of people were in the area only hours earlier.

“It’s a highly commercial area with a lot of people normally in there. There’s a mall, there’s a theater, a TGI Fridays,” Meloy said. The area also includes some industrial sites.

Some of the damaged power poles leaned precariously over roadways, with power lines dangling to the ground, and forced the closing of Interstate 244 for about two hours immediately after the storm.

More than 11,000 customers were without power at one point. More than 3,600 remained without electricity late Sunday morning, according to Public Service Company of Oklahoma.

National Weather Service meteorologist Amy Jankowski said preliminary reports indicate a tornado, but it could be Monday before surveyors complete their investigation, and there is no preliminary estimate of the storm’s strength.

Tornadoes are generally associated with spring months, but Jankowski said they can occur any time.

“I wouldn’t say outrageously rare, but it is uncommon,” to see an August tornado, Jankowski said.

Jankowski said the storm system moved out of the Tulsa area into southeastern Oklahoma, with potentially heavy rainfall creating a threat of flooding through Monday and possible wind gusts of up to 60 mph.