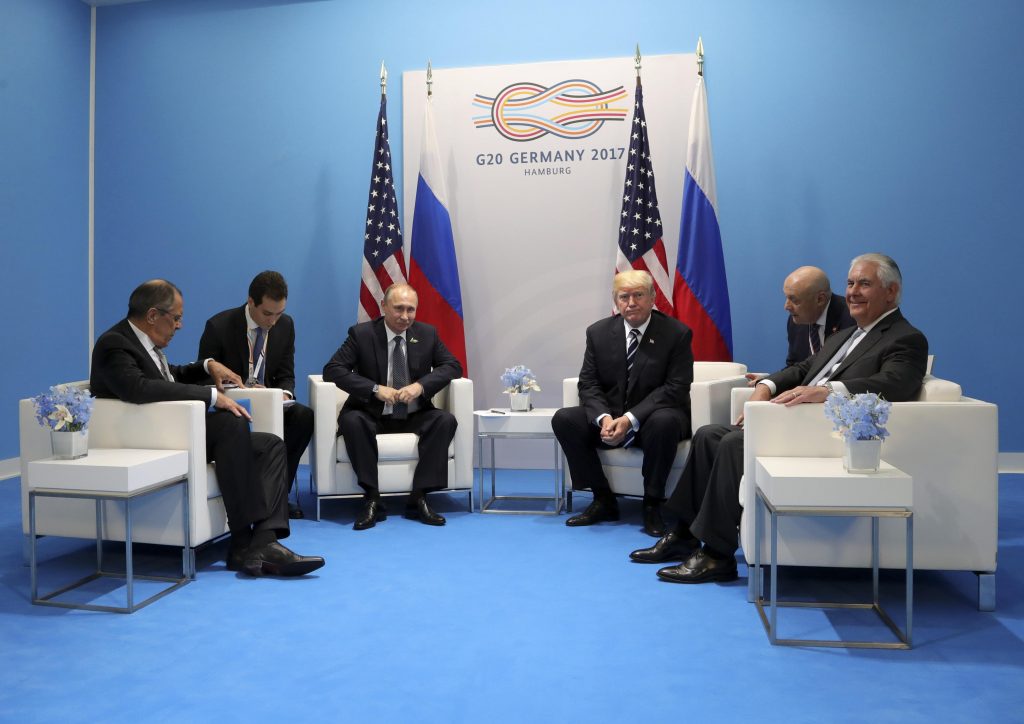 The sanctions, which passed both houses of Congress by overwhelming majorities despite Trump’s objections, in part target the Russian energy sector, with new limits on U.S. investment in Russian companies.

In retaliation, Moscow has ordered Washington to cut 755 of its 1,200 embassy and consulate staff in Russia and is seizing two U.S. diplomatic properties there.

Speaking to reporters on Tuesday, Tillerson held out hope for better ties.

“There’s been no belligerence,” he said of his dealings with Lavrov. “I think he is as committed as I am to trying to find ways that can bring this relationship back.”

Analysts and former U.S. officials were skeptical that much progress is likely any time soon on areas such as reducing the violence in Syria’s civil war or calming the conflict in eastern Ukraine, let alone reversing Russia’s annexation of Crimea.

“The backdrop for that is obviously horrible given the Russian anger over the sanctions bill and the continued day-to-day revelations in the Russia probe,” said Carnegie Endowment analyst Andrew Weiss, referring to investigations into potential collusion between the Trump campaign and Russia during the 2016 U.S. presidential election.

Russia has denied seeking to sway the U.S. election and Trump has denied any collusion.

“The Russians are probably in no mood to even allow us to show progress, because if they [did] they would be saying you can go ahead and sanction us without consequences,” said a former U.S. official, speaking on condition of anonymity. “There is an incentive for them to have a lousy meeting.”

Tillerson and Lavrov are likely to discuss the “de-escalation zone” the nations agreed to establish in southwestern Syria. Russia and Iran are the main outside backers of Syrian President Bashar al-Assad while Washington supports some of the rebel groups seeking to topple him in a six-year civil war.

A second former senior U.S. official said he thought the best the two might achieve would be to prevent further deterioration.

“Do no harm is the other side of the coin,” said the former official who spoke on condition of anonymity, saying he would expect the two men to review those areas such as the arctic, space and arms control where U.S.-Russian cooperation continues.

One of the few areas where Washington and Moscow could make progress is on nuclear and conventional arms control, something they have achieved throughout their long history of tensions.

Tillerson and Lavrov agreed in principle in April to resume so-called strategic stability talks on disputes ranging from nuclear arms and missile defense to conventional military deployments in Europe. The last formal talks were held in 2012.

Last month, the sides agreed to “exchange scheduling proposals in the near future” for that dialogue and for talks on extending New START, a 2010 accord that requires them to cut deployed strategic nuclear forces to 1,550 warheads and 700 delivery systems by Feb. 5 2018. It expires in 2021, but can be extended by five years if the U.S. and Russian presidents agree.