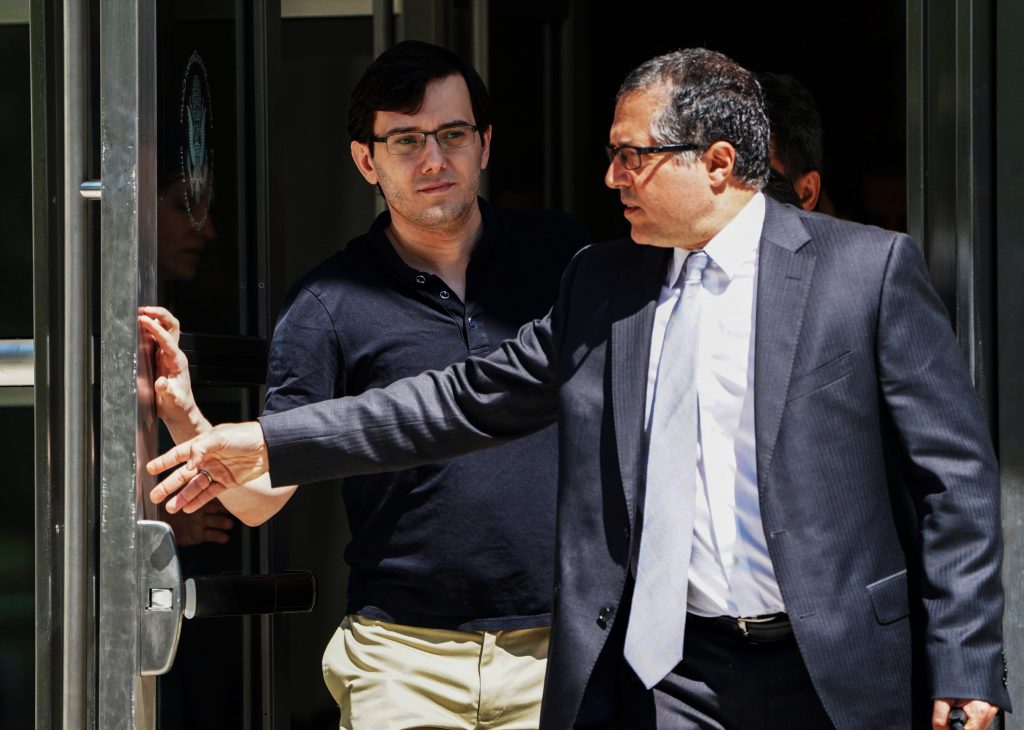 A jury convicted Martin Shkreli, the brash former drug company and hedge fund executive, on Friday of defrauding investors in hedge funds he ran years before he gained fame for jacking up the price of a drug.

Jurors in District Court in Brooklyn found Shkreli guilty of two counts of securities fraud and one count of conspiracy. But they acquitted him of five conspiracy counts, including conspiracy to steal from his old drug company, Retrophin Inc.

Federal prosecutors had accused the 34-year-old New Yorker of lying to investors in the funds and looting Retrophin to pay them back.

Immediately after the verdict, Shkreli appeared somewhat shaken. But when he emerged from the courthouse later to talk to reporters, he was happy and confident.

He portrayed the verdict, which came on the fifth day of deliberations after a month-long trial, as a victory.

“This was a witch hunt of epic proportions, and maybe they found one or two broomsticks, but at the end of the day, we’ve been acquitted of the most important charges,” he told reporters.

“Justice was served,” she said after the verdict.

Before going on trial, Shkreli had been best known for raising the price of anti-infection drug Daraprim by 5,000 percent in 2015 as chief executive of Turing Pharmaceuticals.

That increase sparked outrage from U.S. lawmakers and patients – and earned Shkreli the nickname “Pharma bro.”

Shkreli emphasized the jury’s finding that he did not conspire to steal from Retrophin.

“Count seven was the government’s attempt to theorize that I robbed Peter to pay Paul, and the jury has spoken conclusively that Retrophin was not defrauded in this case,” Shkreli told reporters.

Shkreli’s attorney, Benjamin Brafman, citing his client’s acquittal on the Retrophin charge, said Shkreli might avoid prison time or at least receive a “much, much lower” sentence than that contemplated by the government.

Prosecutors said Shkreli eventually paid investors back with stock or cash from Retrophin by having them sign settlement or consulting agreements with the company. Those agreements were the basis for prosecutors’ claim that Shkreli conspired to steal from Retrophin.

During his closing arguments, Brafman urged jurors to see his client not as a fraudster but as an eccentric genius determined to find cures for rare diseases.

Brafman said that Shkreli’s statements to investors were made in good faith. He also emphasized that none of Shkreli’s investors lost money, a rarity in a securities fraud case.

John Zach, a former federal prosecutor who is now a defense lawyer at the law firm of Boies Schiller Flexner, said the fact that investors did not lose money could help Shkreli get a lighter sentence.

Christopher LaVigne, a former federal prosecutor who is now a defense lawyer at the law firm of Shearman & Sterling, said it was notable that prosecutors secured a conviction without investor losses, and said it could encourage more such cases in the future.

“A case like this, I think it emboldens them,” he said.