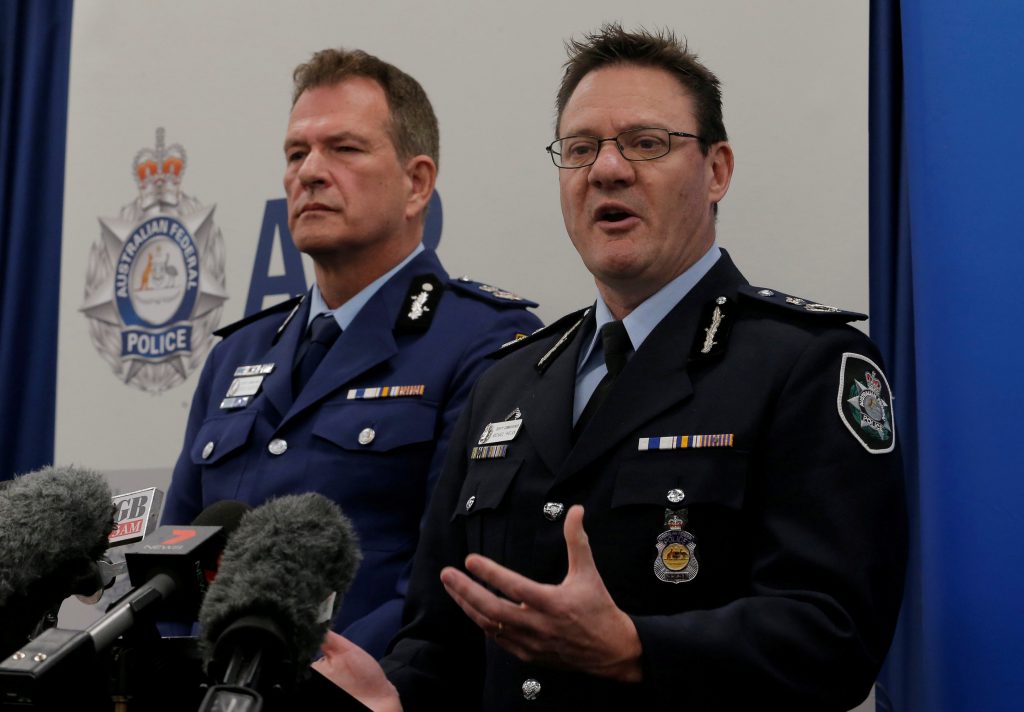 An Australian man sent his unsuspecting brother to Sydney airport to catch an Etihad Airways flight carrying a home-made bomb disguised as a meat-mincer built at the direction of a senior Islamic State commander, police said on Friday.

Detailing one of Australia’s “most sophisticated” terror plots, police said two men, who have been charged with terror-related offenses, also planned to build a device to release poisonous gas in a public area.

High-grade military explosives used to build the bomb were sent by air cargo from Turkey as part of a plot “inspired and directed” by the Islamic State terror group, police Deputy Commissioner for National Security Michael Phelan said.

The plot targeted an Etihad Airways flight on July 15 but the bomb never made it past airport security, he said.

“This is one of the most sophisticated plots that has ever been attempted on Australian soil,” Phelan said.

Police allege that one of the two men charged late on Thursday had been introduced to Islamic State by his brother, who they said was a senior member of the group in Syria.

Communication between the accused man and Islamic State began around April, police said. Under the instruction of the unidentified Islamic State commander, the men built a “fully functioning IED (improvised explosive device).”

One of the brothers was unaware that he was carrying a bomb disguised as a commercial meat mincer, in his luggage, and tried to check it in at the airport, police said.

“We’ll be alleging that the person who was to carry the IED on the plane had no idea [he was] going to be carrying an IED,” Phelan said.

Such a device would work like a large grenade, exploding with enough force to blow a hole in an airplane, even if it went off in the cargo hold, said Professor Greg Barton, a security expert at Deakin University in Melbourne.

“I think the logic would be that you pack your explosives in and seal it up, and if someone does a quick physical inspection it just looks like what it is, a meat grinder, because it’s not electrical or electronic, it’s less likely to be suspicious.”

Police said there was “a little bit of conjecture” about what happened next, but it appeared that one of the accused then left the airport, taking the luggage with him. The man’s brother boarded the plane and has not since returned to Australia.

“I want to make it quite clear – it never got near screening. I don’t want anyone to suggest that it … penetrated airport security layers … because it did not. It didn’t go anywhere near it,” Phelan said.

Etihad said in a statement on Friday it had been working closely with the Australian investigation.

Police arrested four men last weekend in raids across Sydney, Australia’s biggest city. One man has been released, while another is still being held without charge under special counterterror laws.

The two who have been charged are Khaled Khayat and Mahmoud Khayat, who each face two counts of planning a terrorist act. The charges carry a maximum punishment of life in prison.

The men did not apply for bail at a court hearing on Friday, a spokeswoman for New South Wales Courts said, and bail was formally denied. Their next scheduled court appearance is on Nov. 14.

Police also said they had uncovered the early stages of a plot to build an “improvised chemical dispersion device” designed to release hydrogen sulphide gas. Precursor chemicals and other components were found but the accused were “a long way” from making a functioning device.

Police said “preliminary and hypothetical” discussions between the accused and Islamic State suggested a plan to deploy it in a crowded place, such as public transport.

Australia, a staunch U.S. ally that has sent troops to Afghanistan and Iraq, has been on heightened alert since 2014 for attacks by home-grown militants returning from fighting in the Middle East, or their supporters.

While there have been several “lone-wolf” attacks, officials say 13 significant plots have been foiled in that time.

Since police revealed details of the scheme, security experts said it exposed weaknesses in air-cargo screening, particularly in Turkey, where intelligence agencies have been weakened by a government purge in the wake of last year’s failed coup.

“Islamic State is now positioned in Turkey such that it can send military-grade explosive via cargo flights out of Turkey around the world,” said Deakin University’s Barton. “Now presumably Sydney is not a one-off and they are going to try this elsewhere and that’s a level of risk that we hadn’t thought of before.”