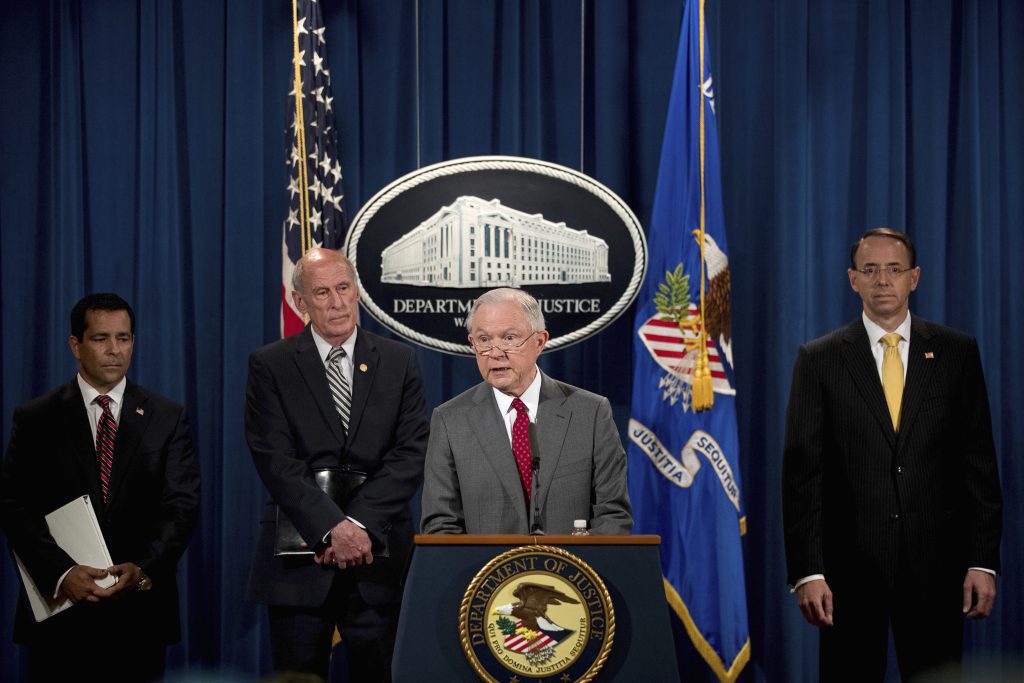 Attorney General Jeff Sessions pledged on Friday to rein in government leaks that he said undermine American security, taking an aggressive public stand after being called weak on the matter by President Donald Trump.

The nation’s top law-enforcement official cited no current investigations in which disclosures of information had jeopardized the country. His announcement, made with other security officials at the Justice Department, followed a series of news reports involving the Trump campaign and White House that have relied on classified information.

In prepared remarks, Sessions said: “No one is entitled to surreptitiously fight their battles in the media by revealing sensitive government information. No government can be effective when its leaders cannot discuss sensitive matters in confidence or to talk freely in confidence with foreign leaders.”

Meanwhile, a White House adviser raised the possibility of lie-detector tests for the small number of people in the West Wing and elsewhere with access to transcripts of President Donald Trump’s phone calls. The Washington Post has published transcripts of his conversations with the leaders of Mexico and Australia.

Trump counselor Kellyanne Conway told Fox News that “it’s easier to figure out who’s leaking than the leakers may realize.” And might lie detectors be used? She said: “Well, they may, they may not.”

Trump’s outbursts against media organizations he derides as “fake news” have led to predictions that his administration will more aggressively try to root out leaks.

Trump complained on Twitter last week that Sessions was weak in cracking down on leaks, saying, “Sessions has taken a VERY weak position on Hillary Clinton crimes (where are E-mails & DNC server) & Intel leakers!”

Sessions said in his remarks that his Justice Department has more than tripled the number of active leaks investigations compared to the number pending when President Barack Obama left office. He said the Department is reviewing guidelines related to subpoenas of journalists.

“This nation must end the culture of leaks. We will investigate and seek to bring criminals to justice. We will not allow rogue anonymous sources with security clearances to sell out our country any longer,” Sessions said in his remarks.

Media organizations also had an often-tense relationship with the Obama administration, whose Justice Department brought more leaks cases than all his predecessors combined and was criticized for maneuvers seen as needlessly aggressive and intrusive.

That included a secret subpoena of phone records of Associated Press reporters and editors following a 2012 story about a foiled bomb plot, and the labeling of a Fox News journalist as a “co-conspirator” after a report on North Korea. The Justice Department also abandoned a years-long effort to reveal his source in the trial of an-ex CIA officer who was later found guilty of disclosing classified information.

Following consultation with media lawyers, the Department in 2015 revised its guidelines for leak investigations to require additional levels of approval before a reporter could be subpoenaed.