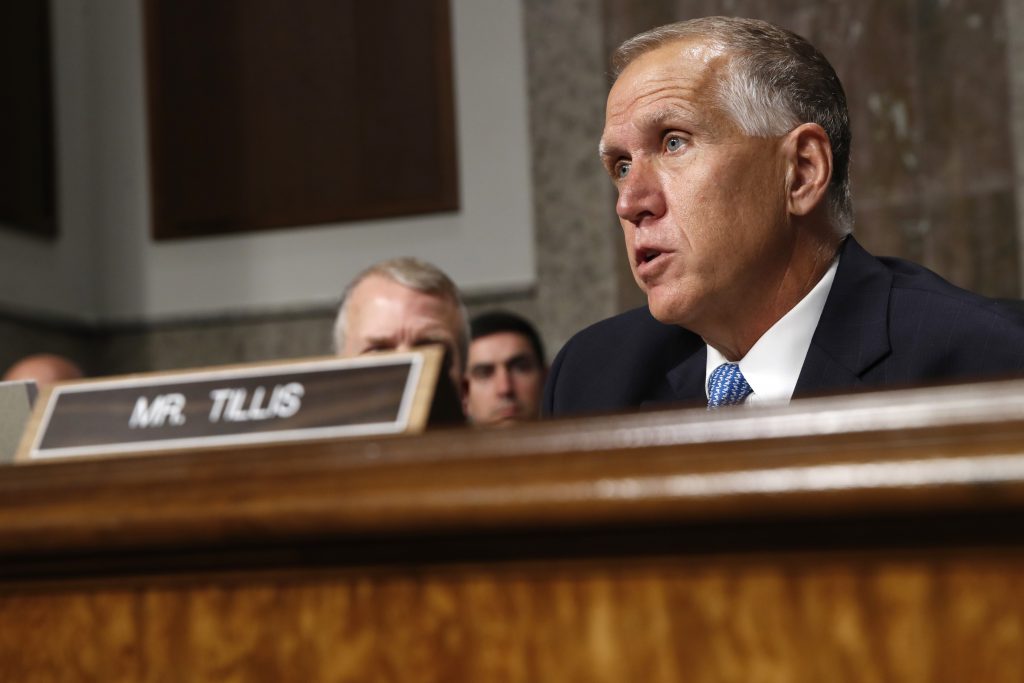 Two members of the Senate Judiciary Committee moved Thursday to protect Special Counsel Robert Mueller from being fired by President Donald Trump, putting forth new legislation that aims to ensure the integrity of current and future independent investigations.

Republican Sen. Thom Tillis of North Carolina and Democratic Sen. Chris Coons of Delaware said they introduced legislation letting any special counsel for the Department of Justice challenge his or her removal in court. A three-judge panel would review the dismissal within 14 days of the challenge.

The bill would apply retroactively to May 17, 2017 — the day Mueller was appointed by Deputy Attorney General Rod Rosenstein to investigate allegations of Russian meddling in the 2016 election and possible ties between Russia and Trump’s presidential campaign.

“This is something that lives long beyond this” situation involving Mueller, Tillis told reporters. “And I think it’s also something that begins to re-establish the reputation for independence in the Department of Justice.”

Tillis was among many GOP senators who defended Attorney General Jeff Sessions after Trump criticized him for recusing himself from the Justice Department’s investigation into suspected Russian interference in the election. Trump has threatened to fire Sessions, a former Alabama senator.

“So this is really woven into a series of things that I think we should do to help re-establish the solid reputation of DOJ,” he said.

Tillis said introducing the measure Thursday would prompt discussions among Republican senators about the move over the Senate’s summer recess, which was expected to begin at the end of the week.

Mueller was appointed as special counsel following Trump’s abrupt firing of FBI Director James Comey. Mueller, who was Comey’s predecessor as FBI director, has assembled a team of prosecutors and lawyers with experience in financial fraud, national security and organized crime to investigate contacts between Moscow and the Trump campaign.

Trump has been critical of Mueller since his appointment, and the president’s legal team is looking into potential conflicts surrounding the team Mueller has hired, including the backgrounds of members and political contributions by some members of his team to Hillary Clinton. He has also publicly warned Mueller that he would be out of bounds if he dug into the Trump family’s finances.

Mueller has strong support on Capitol Hill. Senators in both parties have expressed concerns that Trump may try to fire Mueller and have warned him not to do so.

“Ensuring that the special counsel cannot be removed improperly is critical to the integrity of his investigation,” Coons said.

Republican Sen. Lindsey Graham of South Carolina, another member of the judiciary panel, said last week that he was working on a similar bill that would prevent the firing of a special counsel without judicial review. Graham said then that firing Mueller “would precipitate a firestorm that would be unprecedented in proportions.”

Democratic Sen. Cory Booker of New Jersey is also working on Graham’s legislation, according to Booker’s office. Senate Judiciary Chairman Chuck Grassley, R-Iowa, has yet to signal support for either measure.

The Tillis and Coons bill would allow review after the special counsel had been dismissed. If the panel found there was no good cause for the counsel’s removal, the person would be immediately reinstated. The legislation would also codify existing Justice Department regulations that a special counsel can only be removed for misconduct, dereliction of duty, incapacity, conflict of interest or other good cause, such as a violation of departmental policies.

In addition, only the attorney general or the most senior Justice Department official in charge of the matter could fire the special counsel.

In the case of the current investigation, Rosenstein is charged with Mueller’s fate because Attorney General Jeff Sessions recused himself from all matters having to do with the Trump–Russia investigation.